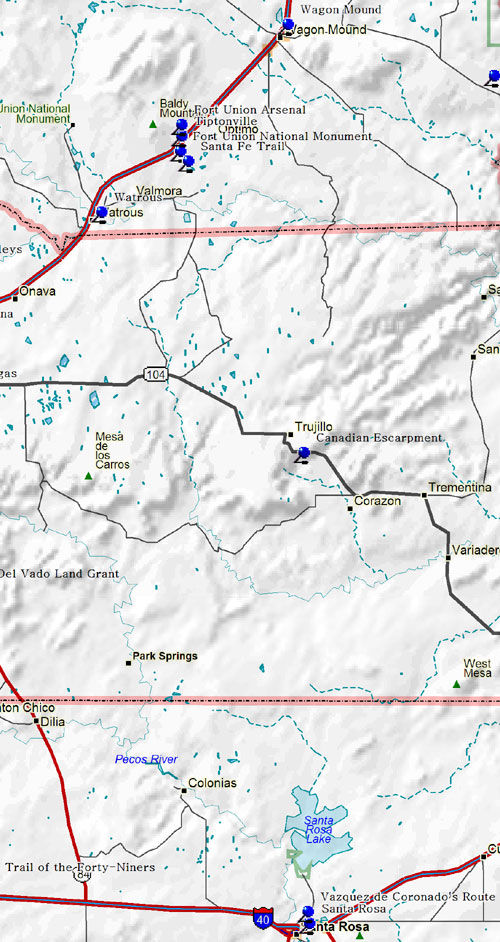 This is a prominent landform of northeastern New Mexico that extends for almost 100 miles between Las Vegas and Clayton. From this point, the grasslands of the High Plains reach northwestward to the foot of the Southern Rocky Mountains which rise to elevations of more than 13,000 feet.

West of Fort Union near the base of the mesa are the ruins of Fort Union Arsenal. The first Fort Union was built at this location in 1851. In 1867 this wooded fort was razed and the adobe Arsenal erected. This Arsenal played a vital role in supplying armaments to military posts throughout New Mexico until 1882.

Once the largest post in the Southwest, Fort Union was established to control the Jicarilla Apaches and Utes, to protect the Santa Fe Trail, and to serve as a supply depot for other New Mexico forts. The arrival of the railroad and the pacification of the region led to its abandonment in 1891.

Opened by William Becknell in 1821, the Santa Fe Trail became the major trade route to Santa Fe from Missouri River towns. The two main branches, the Cimarron Cutoff and the Mountain Branch, joined at Waltrous. Travel over the Trail ceased with the coming of the railroad in 1879.

The Spanish explorer Antonio de Espejo passed through this area in 1583, as did Gaspar Castano de Sosa in 1590. Santa Rosa, the Guadalupe County seat, was laid out on the ranch of Celso Baca y Baca, a politician and rancher in the late 1800s. It was named for his wife, Dona Rosa.

In 1862, William B. Tipton built his home one-half mile west of here. By 1870, he had laid out the town of Tiptonville along the banks of the Mora River. The town served as a stopover and meting place for Santa Fe Trail travelers as well as soldiers from Fort Union. It boasted a mission school, Masonic Lodge, stores and a post office.

In 1540 Francisco Vasquez de Coronado and a small army set out from Mexico to search for the fabled Quivera and its cities of gold. In the spring of 1541, the expedition halted near here for four days while they built a log bridge across the Pecos River. From there they continued their exploration deep into present-day Kansas.

This last great landmark on the Santa Fe Trail was named for its resemblance to the top of a covered wagon. At Wagon Mound, travelers could cross from the Cimarron Cutoff to Fort Union, which is located on the Mountain Branch of the Trail. The two branches joined south of here at Waltrous. 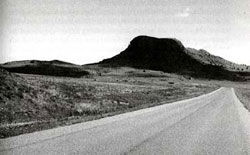 The above picture and the following story are from the book, Encyclopedia of Indian Wars, by Gregory F. Michno.

A band of Jicarilla Apaches jumped a train of U.S. mail wagons on its way from Independence, Missouri, to Santa Fe. The Indians attacked in the morning, and the fighting lasted all day. Two whites were wounded and placed in a wagon; the remainder managed to hold their own.

That night, a band of Utes joined the Apaches. The Utes said they did not know how to fight Americans, so the Apaches said they would show them. In the morning the mail wagons were moving closer to the high ground at Wagon Mound when the combined force of raiders attacked again, this time with overwhelming force. The Indians killed ten men and every animal. Soldiers from Santa Fe buried the dead. They found some of the men stripped, but none scalped. Arrows covered the ground and the mail was scattered across the plains.

The Mountain Branch and the Cimarron Cutoff of the Santa Fe Trail meet at Watrous. This important spot on the Trail was first known as La Junta, "junction" in Spanish. In 1879, with the coming of the railroad, it was named for Samuel B. Watrous, a prominent local rancher.