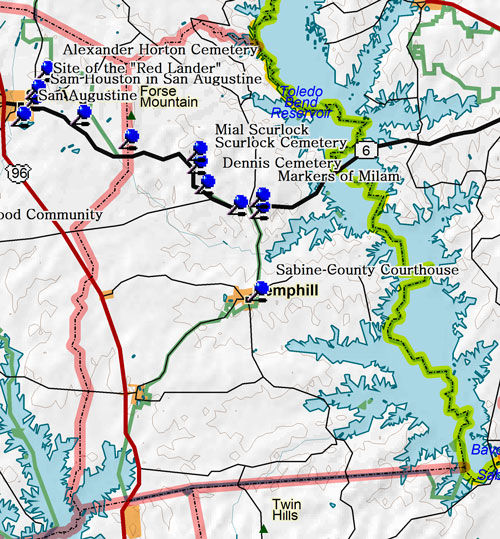 Marker Title: Dennis Cemetery
City: Milam
County: Sabine
Year Marker Erected: 1982
Marker Location: off SH 103 on Dennis Cemetery Ln., 4 mi. west of Milam.
Marker Text: This cemetery was established prior to 1836 when Texas was part of Mexico. Located on property later donated by pioneer settler Isaiah Hamilton, it was used as a burial site for slaves of the area around the pioneer Sulphur Spring community. The significance of the historic Dennis Cemetery is reflected in the lives of individuals buried here. Gravesites include those of Easter Scurlock, later Mrs. Randall Sneedy, and Henry Smith, who came to Texas in 1834 with their owner Captain William Scurlock, a celebrated veteran of the Texas Revolution two years later. Following Emancipation in 1865, both former slaves figured prominently in the development of the area's black community. Two of Easter's sons, Dave and Dick, who acquired the family name of Jim Dennis when they were sold to him, also became active leaders here. Descendants of slaves buried at this site still live in the area. No longer in use, the Dennis Cemetery contains more than 100 graves. The burial ground now serves as a reminder of Texas' early history and of the area's rich heritage. It is a symbol of pride for the local black community, which was founded on the efforts of pioneer slaves and Freedmen interred here.

Marker Title: Sabine County Courthouse
Address: Courthouse Grounds
City: Hemphill
County: Sabine
Year Marker Erected: 1981
Marker Location: SH 87
Marker Text: An 1858 election called for Sabine County offices to be moved from Milam (7 mi. N) to this more central location. The new county seat, Hemphill, was named for former Texas Supreme Court Justice John Hemphill. The first courthouse at this site burned in 1875 and was replaced by a larger frame structure. The present building was started in 1906 by N. A. Dawson under the direction of James Barney Lewis. The two two floors were rebuilt following a fire in 1909 and a remodeling of the structure was completed in 1938 by the Works Progress Administration.

Marker Title: Scurlock Cemetery
City: Geneva
County: Sabine
Year Marker Erected: 1980
Marker Text: This cemetery is named for North Carolina native William Scurlock (1807-1885), a veteran of the Texas Revolution, who is buried here. He and his brother Mial migrated to Texas in 1834 and constructed a log cabin in this vicinity. The following year they enlisted in the Texas Revolutionary army. Known as the "Man with the Charmed Life," William served in the Siege of Bexar, the Battle of Agua Dulce, and participated in the Matamoros Expedition. Captured by Mexican forces at Goliad and used as a medical assistant, he escaped the massacre of Col. James W. Fannin's troops. He later eluded his captors and fought at the Battle of San Jacinto. Mial Scurlock was killed at the fall of the Alamo. After the war Capt. Scurlock served in the Republic of Texas Congress (1839-40) and fought in the Mexican War (1846-48) before settling here. His wife Frances (1821-1902) was the daughter of William A. and Phenaty Thompson, pioneer settlers of the area. The earliest marked grave here is that of their son George, who died in 1864. Also buried here is Confederate veteran W. J. Walton (1838-1916). Captured at Jonesboro, Georgia, in 1864, he spent the remainder of the Civil War in an Illinois military prison.

Marker Title: Mial Scurlock
City: Geneva
County: Sabine
Year Marker Erected: 1983
Marker Text: (b. 1809) and his brother William Scurlock (1807-85) left their Mississippi home in 1834 to settle in Texas, then a part of Mexico. That same year they received a land grant here in the Sabine District and, with their slaves, began farming the site. The following year, when disputes between Texas settlers and Mexico resulted in the Texas Revolution, the Scurlocks joined the Texas army at San Augustine. Mial participated in the Siege of Bexar and in the Battle of the Alamo, where he was killed on March 6, 1836, in the defense of his adopted land.