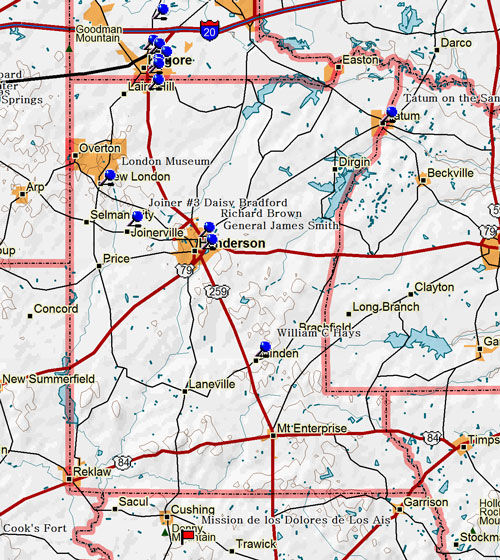 Marker Title: Henderson
Address: SH 13 and US 79B
City: Henderson
County: Rusk
Year Marker Erected: 1989
Marker Text: Founded as the county seat for the newly created county of Rusk in 1843, Henderson was named for Republic of Texas pioneer and statesman James Pinckney Henderson, who would later become the first Governor of the State of Texas. Land for the town was donated by W. B. Ochiltree, who stipulated that it be named for his friend Henderson, and by Republic of Texas General James Smith, who is known as the "Father of Henderson." Town lots were sold soon after the city was established, with land set aside for both churches and schools. A wooden courthouse was built in the center of town in 1849, and the town grew steadily as homes and businesses were constructed. A disastrous fire destroyed much of the central business district in 1860. Following the Civil War and the arrival of the railroads in this area in the 1870s, a large number of brick structures were built in the downtown area. The discovery of the vast East Texas oil field in 1930 caused an economic boom in Henderson. The population increased from 2,000 to 10,000 within a matter of months. The town continues to serve as a center of commerce and civic activities.

Marker Title: Joiner No. 3 Daisy Bradford
City: Henderson
County: Rusk
Year Marker Erected: 1965
Marker Location: SH 64 about 6 mi. west of Henderson
Marker Text: East Texas Oil Field Discovery Well. Discovery genius was C. M. (Dad) Joiner, 70-year-old Oklahoman who for years believed there was oil in Rusk County. Driller was E. C. Laster. Crew: Dennis May, Dave Cherry, Glenn Pool, Jim Lambert and Dave Hughes. Joiner's 2 early efforts failed-- one with a jammed bit, one with the drill pipe stuck. The rig was next skidded 300' down slope. "This is as good a place as any," said Laster. Then on May 8, 1929, Joiner No. 3 Daisy Bradford was spudded in. Equipment consisted of an old rotary rig powered by a single-cylinder engine; one 45 hp boiler; one old cotton gin boiler fired with soggy oak and pine chunks by roustabout Dan Tanner. The depression was on, and money scarce. The crew often went without pay. Joiner sacrificed much of his 10,000 acre block of leases. Finally, on Sept. 5, 1930, a drill stem logged at 3536' into the Woodbine Formation showed oil. A better rig had to be brought in. On Oct. 3, 1930, the well blew in and oil went over the crown block. The boom was on. Cars were bumper-to-bumper on all access roads. Derricks rose in all directions. In its first 30 years, this great field produced more than 3.5 billion barrels of oil. It now covers some 200 square miles-- the largest in the world.

Marker Title: Lou Della Crim No. 1
City: Kilgore
County: Rusk
Year Marker Erected: 1987
Marker Text: Following the discovery of oil in East Texas on October 3, 1930, J. Malcolm Crim of Kilgore believed there was more oil to be found in the area. By October 17 drilling had begun on land belonging to his mother, Lou Della Crim. The well came in on December 28 and was named Lou Della Crim No. 1. Its discovery caused the population of Kilgore to boom from 700 to 10,000 in three days and, ultimately, proved that the East Texas oil field was a major one, covering over 480 square miles. Lou Della Crim No. 1 initially produced 20,000 barrels per day. It was plugged in 1961.

Marker Title: General James Smith
City: Henderson
County: Rusk
Year Marker Erected: 1967
Marker Location: Corner of S Main & Henderson Sts, Henderson
Marker Text: Park named for General James Smith (Sept. 10, 1792-Dec. 25, 1855) On this hill, as he wished for burial in sight of courthouse is grave of General James Smith, co-founder of Henderson. A south Carolina native, he fought for the U.S. in War of 1812. Moved to Texas 1835. Returned to U.S. to raise troops for Texas War of Independence. Later he fought in Republic's Indian Wars; regulator-moderator uprising in 1840s in East Texas; and in Mexican War. He was first Judge, East Texas District; a legislator; honored in naming of nearby Smith County. His wife, Hannah Parker Smith, is buried beside him in this park. They had ten children.

Tatum on the Santa Fe