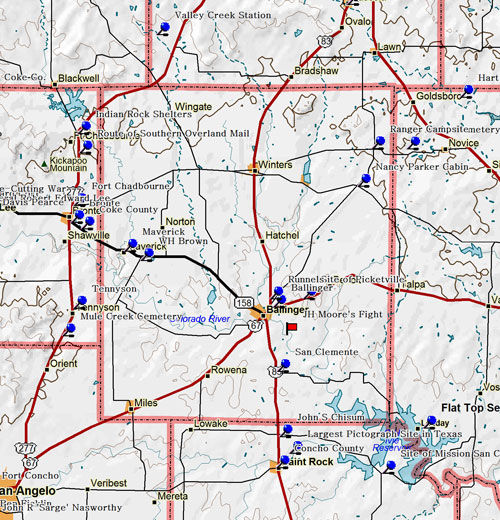 Points of Interest: Courthouse, 1909 Carnegie Library (one of thirty-four library buildings funded by Andrew Carnegie and one of only four still in use as a public library), Restored Railroad Depot, Charles H. Noyes Statue (sculptured by Pompeo Coppini and dedicated to the Spirit of the Texas Cowboy), The Cross (erected by the Jim and Doris Studen Family in 1993), Veterans Memorial on Courthouse Square. 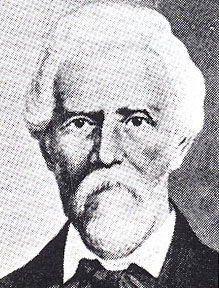 Samuel Maverick
from the book, Panhandle Pilgrimage,
by Pauline Durrett and R.L. Robertson

Marker Title: Maverick
Address: SH 158, about 13.5 mi. W of Ballinger
City: Ballinger
Year Marker Erected: 1964
Marker Location: from Ballinger, take SH 158 west about 13.5 miles.
Marker Text: Founded in the 1870s. Named for Samuel A. Maverick (1803-1870), who came to Texas 1835. Fought in the Texas War for Independence. In Secession Convention, 1861, he was made one of the commissioners to negotiate surrender of United States troops in San Antonio. In 1853 he had land in this important ranching area.

Marker Title: Ranger Campsite
Address: FM 382 via FM 1770, about 15 mi. NE of Winters
City: Winters
Year Marker Erected: 1970
Marker Location: from Winters, from FM 1770 east about 12 miles then go north on FM 382 about 3.5 miles.
Marker Text: One-half mile east of here, some twenty-five to thirty Texas rangers of Company E were stationed in 1874, under the command of Capt. W.J. "Jeff" Maltby. They kept sentries posted on nearby "Ranger Peak" to guard against Indians. Remains of a dry well they dug are still visible.

Marker Title: Ranger Campsite Water Well
Address: FM 382 via FM 1770
City: Winters
Year Marker Erected: 1980
Marker Location: From Winters, take FM 1770 east 12 miles, go north 3.5 miles on FM 382 is in field .5 mile east.
Marker Text: In an effort to protect area settlements, Governor Richard Coke established the frontier battalion in 1874. Comprised of six companies of volunteer Rangers, it was headed by Major John B. Jones. This campsite was part of a defensive line which reached from the Red River to the coastal area. Rangers of Co. E, under the leadership of Captain W.J. Maltby, were stationed here in 1874. The camp consisted of tents, a corral for horses, and this hand-dug well, which failed to provide water. Daily scouting duties included a sentry post on nearby Ranger Peak (0.5 miles west).

Marker Title: Ranger Peak
Address: FM 382 via FM 1770
City: Winters
Year Marker Erected: 1970
Marker Location: from Winters, go east on FM 1770 about 12 miles then go north on FM 382 about 3.5 miles.
Marker Text: Named for Company E, Texas Rangers, which was stationed 1/2 mile east of peak in 1874. Atop peak, Rangers (Under Capt. W.J. "Jeff" Maltby) kept a lookout for Indians. Outfit was part of the frontier battalion, organized to protect Texas settlers on frontier stretching from Red River to the Nueces. Camp was abandoned in 1876.

Marker Title: San Clemente
Address: US 83, about 6.5 mi. S of Ballinger
City: Ballinger
Year Marker Erected: 1968
Marker Location: From Ballinger, take Highway 83 south about 6.5 miles.
Marker Text: The first mission known to have been established in Texas east of the Pecos River, San Clemente was a hastily built, two-room structure located on a hill about 17 miles south of present Ballinger. (Some historians place the site farther south, near Junction.) Although earlier than the great Spanish mission movement, this was one of the first (1684) in Texas and was founded by Juan Dominguez de Mendoza and Fray Nicolas Lopez. Named for the San Clemente River (actually the Colorado), the mission was founded at the request of the Jumano Indians, who desired Christianity and the friendship of the Spanish. The buildings was probably constructed of logs, its lower story serving as a chapel and its upper story as a lookout post. Though they stayed only from March 15 to May 1, awaiting envoys from 48 tribes (bands), the Spaniards baptized many of their several thousand Indian allies. Finally, being attacked by hostile Apaches, Mendoza returned with his men to El Paso six months after he had left. Although Mendoza did not know it, French explorer La Salle had landed on the Gulf Coast, 1684. This fact, plus Mendoza's report of seeing a French flag among the Indians quickly led to other Spanish expeditions being sent to chart the Texas wilderness.