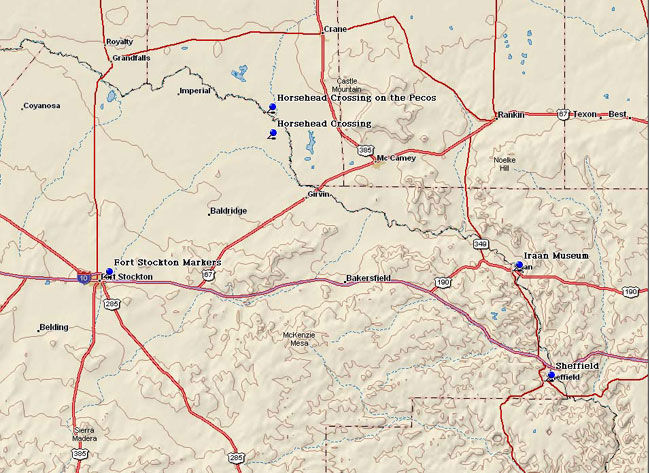 On April 20th 1872, White Horse and Big Bow led a band of Comanches in a raid at Howard's Wells, killing seventeen teamsters, eight of which were chained to the wagon wheels and roasted alive.

Marker Title: Site of Comanche Springs
Address: Spring Dr. at Rooney Park
City: Fort Stockton
County: Pecos
Marker Location: On Spring Dr. at entrance to Rooney Park, Fort Stockton.
Marker Text: Used as a watering place and camping ground by Indians since Pre-Columbian times, the Springs were possibly visited about 1536 by Spaniard Cabeza de Vaca on his wanderings through Texas. The expedition of Juan de Mendoza, with his party of Spaniards and Jumano Indians, camped near the waters in 1684. The six major, gushing springs and the beautiful river they formed resulted from water seeping up through geological faults to the earth's surface. The reservoir which supplied them was located in the formation known as "Trinity Sand." The Springs, among the largest in all Texas, were one of the few good watering places in this arid region. They supplied Indians raiding into Mexico on the nearby Comanche war trail and also gold seekers traveling to California on the southern route, 1849 and later. Butterfield Overland Mail stage stopped here as well, and after 1859 the Springs provided water for Fort Stockton, which was founded both to protect the mail and stop the Comanche raids. The Springs began to be tapped for irrigation as early as 1875, but today irrigation projects to the north and west have reduced the underground water supply so much that the Springs no longer flow.

Marker Title: Old Fort Cemetery
Address: Walter and 8th St.
City: Fort Stockton
County: Pecos
Year Marker Erected: 1968
Marker Location: At the Old Fort Cemetery, corner of Walter and 8th Sts., Fort Stockton.
Marker Text: Burial ground for soldiers stationed at Fort Stockton and for civilians in the little town that grew up around the post. The fort was established 1859; temporarily closed 1861-1867. Troops here protected the San Antonio-San Diego mail line and quelled Indian raids into Mexico on the infamous Comanche Trail. This cemetery testifies to the hardships of frontier life: no headstone was erected for a person over 40. In 1888 (after the fort was permanently closed in 1886), remains of the 56 soldiers buried here were moved to Fort Sam Houston in San Antonio.

Marker Title: Horsehead Crossing
Address: FM 11, about 11 mi NW of Girvin
City: Girvin
County: Pecos
Year Marker Erected: 1974
Marker Location: About 11.5 miles NW of Girvin on FM 11
Marker Text: Famed ford of the Pecos River, named for abundance of horse and mule skulls lining the banks in the 19th century. Many water-starved animals, stolen in Mexico by Indians and driven along the Comanche war trail, died after drinking too deeply from the river. After the California gold strike in 1848, Horsehead Crossing became a major landmark on the trail west, as it provided the first water for about 75 miles on the route from the east. Emigrants arriving here either turned northwest along the river or crossed and continued southwest to Comanche Springs at Fort Stockton. In 1858, the crossing became an important stop on the Butterfield Overland Mail route from St. Louis to San Francisco. An adobe stage stand was built and a ferry put into operation, but both were abandoned in 1861, when mail service was terminated. In late 1862, during the Civil War, federal forces kept a close watch at the crossing in reaction to a threatened confederate invasion. Cattle began to be trailed across the Pecos in 1864, and in 1866, Charles Goodnight and Oliver Loving blazed their famous trail, which came to this point and turned upriver. Completion of two railroads across west Texas in the early 1880s caused abandonment of the crossing.

Marker Title: Horse Head Crossing on the Pecos River
Address: FM 11, about 11 mi. NW of Girvin
City: Girvin
County: Pecos
Year Marker Erected: 1936
Marker Location: From Girvin, about 11 1/2 miles NW on FM 11 to Marked CR, about 4 miles N on CR to marker.
Marker Text: Here crossed the undated Comanche Trail from Llano Estacado to Mexico in 1850 John R. Bartlett while surveying the Mexican boundary found the crossing marked by skulls of horses; hence the name "Horse Head", the Southern Overland Mail (Butterfield), route, St. Louis to San Francisco, 1858-1861, and the road west from Fort Concho crossed here. The Goodnight-Loving trail, established in 1866 and trod by tens of thousands of Texas longhorns, came here and turned up east bank of the Pecos for Fort Summer and into Colorado.

Marker Title: Pecos County Camptosaur Tracks
Address: Fort Stockton Warehouse
City: Fort Stockton
County: Pecos
Year Marker Erected: 1968
Marker Location: In Fort Stockton City Warehouse, taken down due to vandalism.
Marker Text: In the arroyo southwest of this site are dinosaur tracks made 120 million years ago when area was part of sea that extended north from the Gulf of Mexico. These tracks, embedded in rocks of the Comanchean Cretaceous period, were left by a Camptosaurus dinosaur, ancestor to the better known duck-billed Trachodon. According to research, this plant-eating animal was about 20 feet long and ten feet tall. His hind legs were strong and longer than his arms which were used to grasp and tear food. His neck was short; head small; the tail long, perhaps equal in length to the body. Measurement of the exposed tracks (17 1/2 inches wide and 21 inches long) determine that this Camptosaur's stride was 5 Fort 10 inches from toe to heel; his pace, 11 Fort 8 in. The shallow sea in which this dinosaur (and other forms of animal and plant life) lived and died was gradually covered by deposits of mineral-laden earth. As this area rose and settled through hundreds of centuries, the buried organic matter was gradually converted through chemical changes to vast resources of petroleum, natural gas and sulphur. This Camptosaur's tracks remain to remind mankind of the prehistoric age in which the oil industry had its infant beginnings.

Marker Title: Pioneer Stagecoach Stand Operators Mr. and Mrs. Isaac J. Rude
Address: IH 10, W of Fort Stockton
City: Fort Stockton
County: Pecos
Year Marker Erected: 1967
Marker Location: On Service Road side of I-10, about 8 miles West of Fort Stockton.
Marker Text: On way to California from Tennessee in the 1850's Isaac J. and Sarah Isabella Rude settled in West Texas. In Davis Mountains, Rude built and operated a station for the Butterfield Overland Stage; here passengers had meals while mules were unharnessed and exchanged for a fresh team. Soon Butterfield--the pioneer passenger and mail service (1858-1861) from St. Louis to California--had Rude move here to Fort Stockton and build another stand. In 1859, when a stop was added at Leon water hole, 5 miles west of Fort Stockton, Rude built and ran the stand there. Food there was best on the route, said a journalist. Sarah Rude (1834-1916) carried a pistol under her apron, to protect her children. When Indians attacked the Davis Mountains stand, the men loaded guns and handed them to Mrs. Rude--a calm, sure marksman. Just over 5 Fort tall, she butchered and skinned beeves to feed her family, when her husband was away. After stages stopped operating in 1861, Isaac Rude, like others associated with the Overland Mail, joined the Confederate army. Later he became a prosperous businessman in McKinney. Born in 1829, he died in 1902.

Marker Title: Sheffield
Address: US 290
City: Sheffield
County: Pecos
Year Marker Erected: 1980
Marker Location: On US 290 in front of community swimming pool, Sheffield.
Marker Text: Spanish explorers traveled Indian trails here in the Pecos River Valley as early as 1590. Later, U.S. Cavalry, a camel train, and stage and mail lines between San Antonio and San Diego, California, used the route. Nearby Pecos Spring attracted settlers to the area in the 1880s and 90s. Families lived in tents on the north side of the creek and hauled water from the spring. About 1890 a community water well was dug. Early residents were sheep and cattle ranchers. Mail and supplies had to be brought from San Angelo and Ozona. About 1901 Will Sheffield built a grocery and dry goods store approximately one mile from the spring. A post office opened with Will Sheffield as postmaster. Since he was the first to operate a store, the settlement was named for him. A saloon was opened, and in 1901 a school was begun with sixty-four pupils. After living for several years in tents, residents began building permanent homes. Garrett Bean purchased a section of land from the state where the present townsite is located and drew off town lots in 1905. Well-known Texas Ranger Frank Hamer got his start in law enforcement here. Sheffield offers churches and a trade center for area ranches.