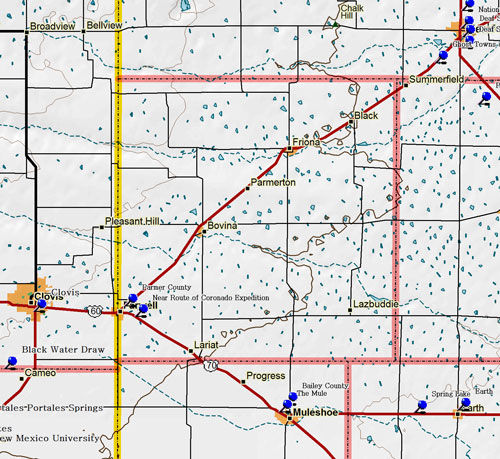 Near Route of Coronado Expedition

Marker Title: Near Route of Coronado Expedition
Address: US 84, S of Farwell
City: Farwell
County: Parmer
Year Marker Erected: 1969
Marker Location: from Farwell take US 84,about .5 miles to Roadside Park; Marker has been stolen.
Marker Text: One of first explorations of North America by Spain. Began in Mexico, crossing into Texas at or near present Parmer County. The party, led by Francisco Vazquez de Coronado, was sent to investigate reports of great wealth among the Indians. In one city, Quivira, the ruler reputedly ate from gold plates. After entering Texas, Coronado and 36 men separated from the main group and continued north. In August, 1541, on the present Kansas-Nebraska line, he found Quivira -- an ordinary Indian village. After the winter of 1541-42, he returned to Mexico. (1969)

Marker Title: Parmer County
Address: US 70/84
City: Farwell
County: Parmer
Year Marker Erected: 1936
Marker Location: on Highway 70/84
Marker Text: Created August 21, 1876, from Bexar County. Named for Martin Parmer ("The Ringtailed Panther"), signer of Texas Declaration of Independence. Organized May 7, 1907. The XIT Ranch, extending across nine counties, initially owned most of Parmer. The Capitol Syndicate, which built Texas' Capitol, received in payment 3,050,000 acres of land and established the XIT in 1885. By 1890, population of the county was only 70. But, with syndicate land sales, buyers came on the new railroad in 1904. Brisk settlement began, with many small farms. Farwell is the county seat. (1965)