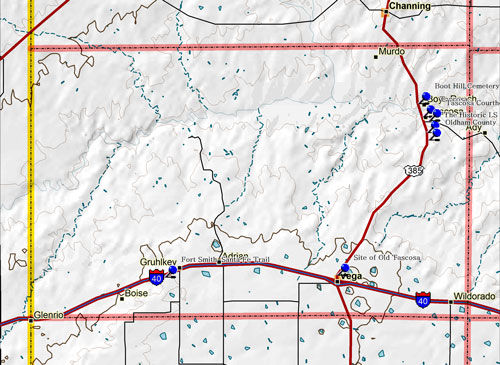 Marker Title: Boot Hill Cemetery
Address: US 385 at Boy's Ranch
City: Vega
County: Oldham
Year Marker Erected: 1936
Marker Location: In cemetery near entrance to Boy's Ranch. From Vega take US 385 north about 24 miles to Boy's Ranch.
Marker Text: Along with law-abiding and God-fearing men and women were buried here, often without benefit of clergy, men who "died with their boots on". The name was borrowed from a cemetery in Dodge City, Kansas, while it was a resort of buffalo hunters and trail drivers.

Marker Title: Fort Smith-Santa Fe Trail
Address: US 40, 4 mi. W of Adrian
City: Vega
County: Oldham
Year Marker Erected: 1991
Marker Location: From Adrian take US 40 4 miles west. Marker is in grove of trees near picnic area, just east of mile marker 14.
Marker Text: What came to be known as the Fort Smith - Santa Fe Trail was first blazed in 1840 by Josiah Gregg, a trader seeking a route to Santa Fe along the south side of the Canadian River. In 1849, Gregg's route was closely followed by a military escort led by Capt. Randolph B. Marcy (1812-1857). Marcy's group traveled from Fort Smith, Arkansas to Santa Fe with about 500 pioneers heading for California. The party entered Oldham County on June 13th, and on June 14th ascended to the Llano Estacado near this site. Reaching the top, Marcy found the plains "as boundless...and trackless as the ocean...a desolate waste of uninhabited solitude." Eighty-five days after leaving Fort Smith, the party reached Santa Fe. After passing the plains, Marcy remarked, "I have never passed a country where wagons could move along with as much ease and facility, without expenditure of any labor in making a road, as upon this route." Marcy advocated the trail as a prospective route for a transcontinental railroad, which was built after the Civil War. Later, as the country entered the automobile age and the interstate highway system was developed, U.S. Highway 66 (Route 66) and Interstate 40 were laid close to the trail.

Marker Title: The Historic LS
Address: US 385, at Canadian River bridge, N of Vega
City: Vega
County: Oldham
Year Marker Erected: 1968
Marker Location: NE of Canadian River Bridge on US 285 at picnic rest area, about 21 miles north of Vega.
Marker Text: Great early ranch well known to badman Billy the Kid and other famed western characters. The LS was founded in 1870s by former Indian territory trader W.M.D. Lee and New York financier Lucien Scott. Through Lee's efforts, the LS had water and grass for over 100,000 cattle and sometimes drove 6 or 7 herds a year up the trail. When thefts followed Billy the Kid's visits, LS men rode west and brought back their cattle; and when Tascosa gunfights put men into Boot Hill graves, the LS escaped disaster. But drouth brought heavy losses in 1886; and grant of 3,000,000 acres of panhandle lands to the XIT (state of Texas' payment for constructing Capitol in Austin) cut old LS range in half. Lee left in 1890 to promote a ship canal in Houston. Scott died 1893. W.H. Gray and E.F. Swift of Chicago bought LS in 1905. Memorable LS men included foreman J.E. McAlister, later a Channing merchant. One of the $25-a-month cowboys was E.L. Doheny, later a multi-millionaire oil man involved in 1920's Teapot Dome scandal. Ownership of brand and 96,000 acres of LS range passed to Col. C.T. Herring, rancher and civic leader of Amarillo; his estate still operates it. 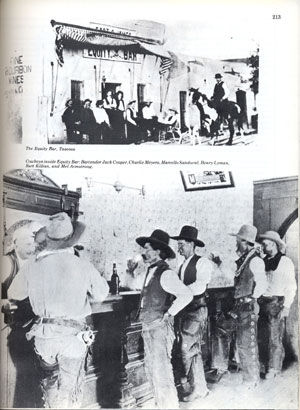 Tascosa Bar
From the book, Panhandle Pilgrimage,
by Pauline Durrett and R.L. Robertson

Marker Title: Tascosa
Address: US 385, N of Vega on Boys Ranch
City: Vega
County: Oldham
Year Marker Erected: 1936
Marker Location: N of Vega on US 385 about 24 mi., on Boys Ranch
Marker Text: Cowboy capital of the Texas Panhandle, 1877-1888. "Billy the Kid" and cowboys from many ranches added to its liveliness. Made famous by wild west fiction. Its name is a corruption of Atascoso (boggy) first given to nearby creek. County seat of Oldham County, 1881-1915.

Marker Title: Old Tascosa
Address: US 385, N. of Vega at Canadian River
City: Vega
County: Oldham
Year Marker Erected: 1963
Marker Location: NE of Canadian River Bridge on US 385 at picnic rest area, about 21 miles north of Vega.
Marker Text: Old Tascosa, cowboy capital of the plains, lay one-half mile northeast. In its brief span it became the center of the open-range world. Stomping ground for some of the West's most notorious bad men and focal point for cattle thieves and ranchmen. Because of the easy crossing of the Canadian River at the site, it early became a meeting place where Indians and Mexican traders (Comancheros) exchanged contraband goods, including women and children. With the passing of the buffalo came the first permanent settlement, made by Mexican sheepherders in 1876. Charles Goodnight and Thomas S. Bugbee brought the first cattle to the free-grass empire the same year. Smaller ranchmen and nesters followed and the boom was on. Hundreds of miles from the general line of settlement, Tascosa lured the lawless and the lawmen: Billy the Kids and Pat Garretts. To accommodate those who died with their boots on in growing gunfights, a cemetery was set aside in 1879. It was named for the famed 'Boot Hill' in Dodge City, Kansas, to which Tascosa was tied by cattle and freight trail. Heaviest toll in a single shoot out occurred March 21, 1886, when three cowboys and a restaurant owner died in a five-minute duel. All went to Boot Hill. The cattle trails, Tascosa's lifeblood, began to be pinched off with the coming of barbed wire, first commercial use of which was drawn still tighter when the vast XIT spread fenced its 3 million acres. By 1887 Tascosa was completely closed in. When the railroad bypassed it the same year, its fate was sealed. By the time the Oldham County seat was moved to Vega in 1915, only 15 residents remained. Sole remnants of the old town today are Boot Hill and the stone courthouse. The site, however, is occupied by Cal Farley's Boys Ranch.

Marker Title: Site of Old Tascosa
Address: NW corner of Courthouse Lawn, US 385
City: Vega
County: Oldham
Year Marker Erected: 1967
Marker Location: NW corner of Oldham County Courthouse, Vega
Marker Text: Contains one of the famous Boot Hill cemeteries of wild west days and was the gathering place for pleasure-seeking cowboys, gamblers and "bad men" of the Panhandle in the 1870s and '80s. Outlaws such as Billy the Kid and lawmen like Pat Garrett and Bat Masterson walked its streets. At first an Indian camping place at a crossing on the Canadian River, then Mexican trading point and pastoral settlement, Atascosa (Boggy Place) rapidly became an open-range trading center and capital of a cattle empire from 1876 to 1887. Romero Plaza and Howard and Rinehart store marked the boom in growth. Struggles between large ranch owners like Charles Goodnight and the "Little Men" of the plains were focused there. Became seat of Oldham County, 1880, and the legal capital of ten unorganized counties. Progress spelled doom for the town. The railroad in 1887 created other important towns and barbed wire fences ended the vital trading routes and great roundups. The open ranges and cattle trails like the famous Dodge City Trail were gone. When county seat was moved to Vega in 1915, few residents remained. Today "Old Tascosa" retains only the courthouse.