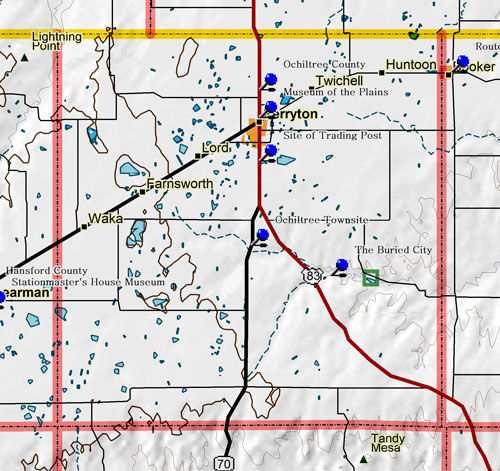 Marker Title: The Buried City
Address: US 83, S of Perryton 10 mi.
City: Perryton
County: Ochiltree
Year Marker Erected: 1936
Marker Location: from Perryton take US 83, south about 10 miles; turn east onto Fryer Lake Road; marker located on private ranch on south side of road.
Marker Text: In 1907, Dr. T.L. Eyerly, Floyd V. Studer and other archaeologists discovered here, "The Buried City." These Pueblo ruins were built by the Panhandle Pueblo Indians who were agriculturists, stone house builders, pottery and basket makers. Dr. Warren K. Moorehead partially excavated this ruin in 1919-1920. Some archaeologists and historians agree that the well-built stone houses were in ruins when Coronado explored this region in 1541. (1936) More

Museum of the Plains

Marker Title: Ochiltree Townsite (Bordering this Highway)
Address: SH 70, 8 mi. S of Perryton
City: Perryton
County: Ochiltree
Year Marker Erected: 1976
Marker Location: from Perryton take SH 70 about 8 miles, south
Marker Text: This county was created in 1876 and named for noted Texas jurist William Beck Ochiltree (1811-1867). In 1876 it was attached for judicial purposes to Clay and later to Wheeler County. In 1886 pioneers began to settle in dugouts here on the prairies near Wolf Creek, saying they lived "in Ochiltree." For convenience in making land and tax transactions, and establishing law and order, they organized the county in 1889, making their village the county seat. First elected officials were William J. Todd, county judge; Dave C. Kettell, sheriff and tax collector; George M. Perry, county clerk; Myrtle L. Daily, treasurer. In 1891 a 2-story courthouse was built (100 yards southeast) of lumber freighted from Dodge City, Kansas. This also served as church, schoolhouse, and social hall for the town. By 1903, Ochiltree had 600 people, churches, a high school, a newspaper, bank, flour mill, and other facilities. In 1919, the Santa Fe Railway founded a new town between Ochiltree and Gray, Oklahoma, and induced people from both places to relocate by offering free lots. In 1919 steam engines and heavy equipment hauled the improvements from Ochiltree to the new site (8 miles north), called Perrytown, in honor of veteran county official George M. Perry. (1976)