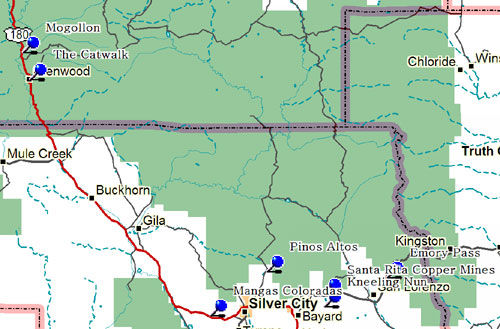 This steel causeway follows two pipelines which supplied water and water power to the old town of Graham where gold and silver ores were milled from nearby mines in the 1890s. The causeway clings to the sides of a sheer box canyon in Whitewater Creek and is accessible by a foot trail from the Whitewater picnic ground.

You are at crest of Black Range, elevation 8,828 feet, uplifted range of Tertiary volcanic and Paleozoic sedimentary rocks bordering Rio Grande graben in which rock layers are about 4 miles lower than at pass. Same rocks cap Caballo Mountains, seen 35 miles to east on east side of Rio Grande trough.

Most famous of the many historic landmarks in the Black Range country is the Kneeling Nun. So named for its resemblance to a nun kneeling in prayer before a great altar. Many legends have grown up around the giant monolith which rests near the summit of the Santa Rita Range.

Mangas Coloradas (Spanish for Red Sleeves) was a chief of the Mimbreno Apaches,who derived their name from the nearby Mimbres Mountains. Mangas Coloradas, a contemporary of legendary Apache chiefs Victorio and Cochise, led his people during the 1850s until he was captured near Pinos Altos in 1863. He was killed the night of January 18, 1863, while being held prisoner at Fort McLane, near present-day Hurley.

The mountains and the town were named for Juan Ignacio Flores Mogollon, governor of New Mexico from 1712 to 1715. The name also is applied to the Pueblo Indians who abandoned the area in the early 1400s. These mountains were inhabited by Apaches until the late 19th century.

In this area are extensive gold, silver and copper deposits mined as early as 1803. A new gold discovery in 1860 by three 49ers from California stimulated a boom that led to the establishment of the mining camp of Pinos Altos.

Once the Grant County seat, the town survived early Apache attacks to produce over $8,000,000 of gold, silver, copper, lead, and zinc before the mines played out in the 20th century.

Copper has been mined here since 1804. For five years, development by Francisco Manuel Elguea resulted in some 6,000,000 pounds of copper being transported annually to Mexico City by mule train. Brief periods of activity were halted by Apache opposition until the coming of the railroad in the 1880s, when the area became a major copper producer.