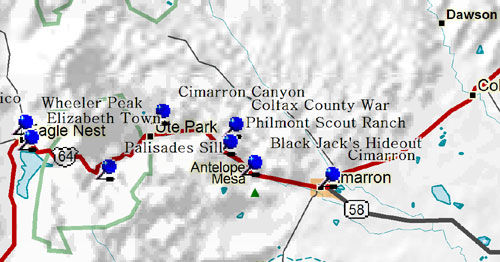 In Turkey Creek Canyon near here, the outlaw gang of Thomas "Black Jack" Ketchum had one of its hideouts. After a train robbery in July 1899, a posse surprised the gang at the hideout. The outlaws scattered after a bloody battle, and the Ketchum gang was broken up.

This village on the Mountain Branch of the Santa Fe Trail was settled around 1844. In 1857 it became the home of Lucien B. Maxwell, and headquarters for the famous Maxwell Land Grant of almost 2,000,000 acres. An agency for Utes and Jucarilla Apaches was located here from 1862 to 1876.

You are now at the Great Plains-Rocky Mountain boundary. The Cimarron Range is one of the eastern-most ranges of the Sangre de Cristo Mountains in this part of New Mexico.

For twenty years after the 1869 sale of the Maxwell Land Grant, homesteaders, ranchers, and miners fought the new owners for control of this enormous region. The resulting murders and general breakdown of law and order led to the removal from office, in 1878, of Territorial Governor Samuel B. Axtell.

The discovery of gold on Baldy Mountain in 1866 brought such a rush of fortune-seekers to the Moreno Valley that "E-town" became a roaring mining camp almost overnight. Because of water and transportation problems, and a decline in ore quality, it had become virtually a ghost town by 1875.

These spectacular cliffs are cut by the Cimarron River through igneous rock known as a sill and composed of the rock type monzonite which was emplaced some 40 million years ago as these Southern Rocky Mountains were being uplifted.

Oklahoma oilman Waite Phillips gave this 127,000 acre property to the Boy Scouts of America in 1938 and 1941. The first National Boy Scout Camp ever established, Philmont now hosts young men from all over the world. Kit Carson, Lucien B. Maxwell, and Dick Wootten were important in the history of this area.

Across Moreno Valley stands Wheeler Peak, 13,161 feet, highest peak in New Mexico, Rocks of Wheeler Peak and the Taos Range are highly resistant granites and gneisses of Precambrian age. Moreno Valley is underlain by soft sandstones and shales which are covered by stream and glacial deposits. Placer gold was mined at Elizabethtown north of here during the 1860's.