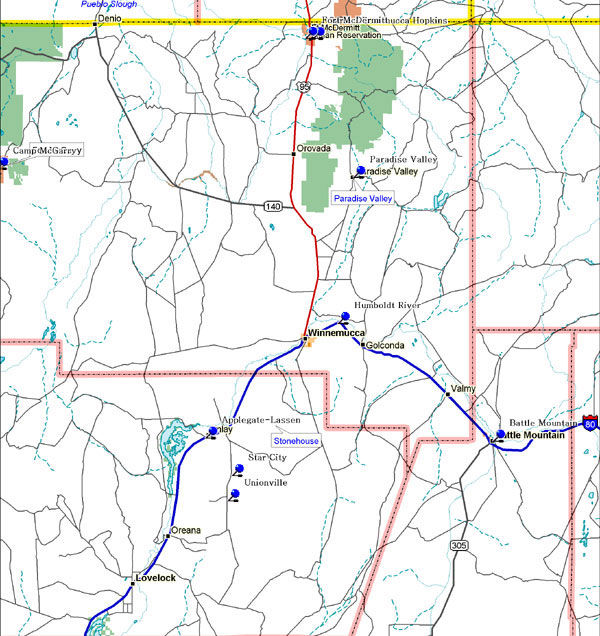 Marker Topic: Applegate-Lassen Emigrant Trail Cutoff
Address: Interstate Hwy 80 at the Imlay Interchange
County: Pershing
Marker Text: Jesse and Lindsay Applegate headed south from Willamette Valley, Oregon June 29, 1846
seeking a less hazardous route to that region from the east. On July 21, they came to a large meadow on the Humboldt River, what is now the nearby Rye Patch Reservoir. Thus they established the Applegate Trail. During the remainder of 1846 and for the next two years, Oregon emigrants successfully traveled this trail. In 1848, Peter Lassen, hoping to bring emigrants to his ranch, acted as guide to a party of ten to 12 wagons bound for California. e followed a route from here to Goose Lake where he turned southward over terrain that was barely passable. The emigrants suffered great hardships; many lives and livestock were lost. It became known as the "Death Route"

Marker Topic: Battle Mountain
Address: U.S. Highway 40
City: Battle Mountain
County: Lander
Marker Text: Battle Mountain's name derives from the mountain range to the southwest, where in 1850 angry California emigrants ambushed a band of Shoshones after the Indians had attacked their wagons.
As a town, it did not spring into existence until January, 1870. In October, 1868, the railroad established Reese River Siding here and made Argenta, five miles eastward, its principal station and point of departure for the busy mining camps to the southward.
Early in 1870, Argenta was moved bodily to this location, and Reese River Siding was renamed Battle Mountain Switch. Stage and freight roads north and south teemed with "mud wagon" stages and massive freight wagons, hauled by long jerk-line teams.
From 1880 to 1938, Battle Mountain was the operating headquarters for the Nevada Central Railroad, as well as the Battle Mountain and Lewis Railroad (1881-1890). The town's first copper boom developed in 1897, in the Galena (Battle Mountain) Range.

Marker Topic: Camp McGarry
Address: Black Rock Desert Region, Soldier Meadows Ranch, Summit Lake South of State Route 293
County: Humboldt
Marker Text: Camp McGarry here on the old Applegate Trail was an Army fort manned from 1865 to 1868.
Troops protected the Idaho-California mail and stage roads and the nearby trails in Nevada and Oregon.
Officers’ quarters, mess hall, barracks and a 100-horse stone barn were constructed 12 miles south of the fort.
In 1866, Camp McGarry was made headquarters of the District of Nevada. In autumn of 1868, troops were moved to Camp Winfield Scott, north of Paradise, Nevada; and Camp McGarry, largest military reservation in Nevada, comprising 75 square miles, was abandoned.
In 1871 the land was relinquished for use as an Indian reservation.

Marker Topic: Fort McDermitt
Address: U.S. Highway 95
City: McDermitt
County: Humboldt
Marker Text: Established in 1865, it was first called Quinn River Camp No. 33 (on the East Fork) then renamed in honor of military District Commander Lt. Col. Charles McDermitt, who was killed by Indians. Typically, the fort consisted of several adobe, stone and frame buildings surrounding a square. Its purpose was to protect the Virginia City-Quinn River Valley-Oregon Road. Twenty-four years of operation made it the longest active Army fort in Nevada. Its troops participated in the Modoc War and the Bannock and Shoshone Indian troubles. It was the last of the Nevada Army posts in service when converted into an Indian reservation school in 1889.

Marker Topic: Humboldt River
Address: Interstate Highway 80, eight miles northeast of Winnemucca
City: Winnemucca
County: Humboldt
Marker Text: First discovered November 9, 1828, by Peter Skene Ogden on his fifth Snake Country expedition. Entering Nevada near present Denio, Ogden came southward along Quinn River and the Little Humboldt River, emerging on the Humboldt main stem near this site. Ogden explored hundreds of square miles of the Humboldt's course, left records of his trailblazing in his journal and first map of the area.
Ogden gave the name "Unknown River" to the Humboldt at this time, as he was unsure where it went. Later, after the death of his trapper Joseph Paul, Ogden renamed the stream Paul's River, then Swampy River, finally Mary's River, from the legendary Indian wife of one of his trappers. In 1833 the Bonneville-Walker fur party named it Barren River.
Ogden's or Mary's River were commonly used names for the Humboldt prior to the publication of John C. Fremont's map in 1848.
The Humboldt was the only natural arterial across the Great Basin. It funneled thousands of emigrants along its valley en route to the Pacific Coast during the period of 1841-1870.

Marker Topic: Paradise Valley
Address: Post Office in Paradise Valley on State Route 290
City: Paradise Valley
County: Humboldt
Marker Text: Hudson Bay Company's Peter Skeen Ogden passed through Paradise Valley November 8, 1828. First settled in 1863, Indian trouble starting in 1864, worsening in 1865, led to the establishment of Camp Winfield Scott (1866-1870) about four miles from here. Paradise Valley soon became the granary and fruit-raising center for the mining camps of central and eastern Nevada and those of southwest Idaho Territory.
Scottsdale, named for the nearby Army Post, was established in 1866. It was renamed Paradise City in 1869. During the valley's period of mining activity (1878-1920), the community served as supply center for the small camps of Queen City, Spring City and Gouge-Eye. Today, livestock raising is the main activity. The town is now called simply Paradise Valley.

Marker Topic: Star City
Address: Junction of State Route 400 and the road to Star City in the Buena Vista Valley, approximately ten miles south of intersection with Interstate Highway 80
City: Star City
County: Pershing
Marker Text: Located in the Star Mining District some seven miles west of here, Star City was established in 1861 when rich silver ore was discovered in the area. During the boom years of 1864 and 1865, the town boasted 1,200 residents, two hotels, three general stores, a Wells-Fargo office, a church and a dozen or more saloons.
The Sheba Mine, the district's biggest operation, had produced about $5,000,000 in silver by 1868, the year the rich ore began to run out. Three years later, only seventy-eight inhabitants remained in Star City. All that remains today are crumbling foundations, rusted mill equipment and memories.

Marker Topic: Unionville
Address: Junction of State Route 400 and the gravel road to Unionville in the Buena Vista Valley, fifteen miles south of intersection with Interstate Highway 80
City: Unionville
County: Pershing
Marker Text: Southern sympathizers settled in Buena Vista Canyon in 1861 after the discovery of silver ore. Appropriately called Dixie, their camp's name changed to Unionville in late 1861, when the will of the neutral and Northern factions of the population prevailed. The town was designated as the seat of Humboldt County, which was itself the product of Buena Vista mining activity. Unionville lost this distinction to Winnemucca in 1873.
By the late 1870's, most of the local ores were depleted, but it has remained a pleasant place, enjoying more amenities and less violence than most mining towns in spite of strong political feelings.
Today, Unionville still retains its picturesque quality.

Marker Topic: Sarah Winnemucca Hopkins (1844-1891)
Address: McDermitt Indian Reservation eight miles from U.S. 95
County: Humboldt
Marker Text: The northern Paiute name Thocmetony (Shell-Flower) was bestowed on this valiant daughter of Chief Winnemucca and grandchild of the redoubtable Captain Truckee - a friend and supporter of General John C. Fremont. Sarah sought understanding between her people and whites when the latter trekked across and settled on Indian homelands. By lecturing, by writing a book (presumably the first in English by an Indian woman) and by founding a non-government school for Indian children, she worked tirelessly to remedy injustice and to advocate peace. Here at Fort McDermitt as interpreter and teacher she served well both Indians and the U.S. military. This exceptional Indian woman, a leader of her race, believed in the brotherhood of mankind.