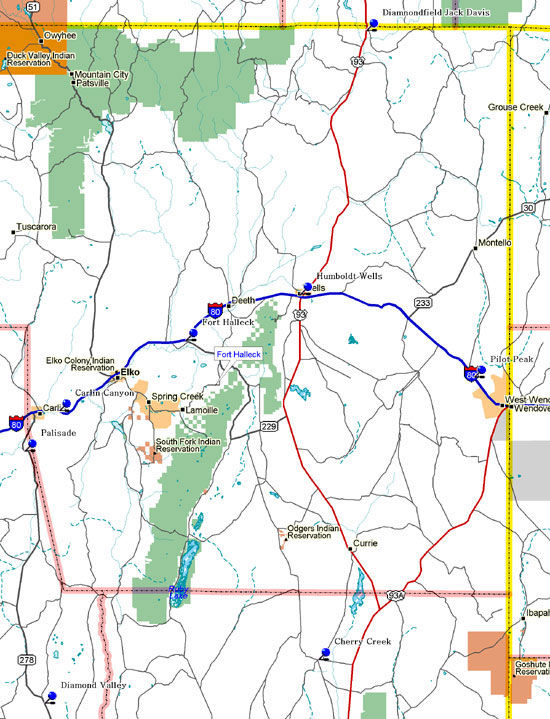 Marker Topic: Carlin Canyon
Address: Interstate Hwy 80 at the Carlin Canyon Rest Area
County: Elko
Marker Text: In December 1828 Peter Skene Ogden and his trapping brigade (Hudson's Bay Company's Fifth Snake Country Expedition) were the first whites to enter here. Joseph Paul, one of Ogden's trappers, died nearby - the first white man to die and be buried in the Humboldt county. The Bidwell-Bartleson Party was the forerunner of the 1841-1870 California Emigrant Trail tide through the canyon - then known as Wall Defile or Fremont Canyon. Late in 1845 John Fremont dispatched his Kern-Talbot-Walker subsection down the Humboldt; they traversed this canyon with difficulty on November 10. In September 1846 the Reed-Donner Party, en route to cannibalism and death in the deep snows of the Sierra Nevada, viewed the canyon. The Central Pacific's Chinese track gangs constructed the railroad (now Southern Pacific) through here in December 1868. Subsequently, the canyon became known as Carlin or Moleen Canyon. The Western Pacific, second transcontinental rail link across Nevada, was constructed in 1907.

Marker Topic: Cherry Creek
Address: At the end of State Route 489, 45 miles north of Ely
City: Ely
County: White Pine
Marker Text: Here at one time was the largest town in White Pine County. Part of the Cherry Creek Mining District, Cherry Creek's years of largest gold and silver production were between 1872and 1883. At the peak of its prosperity, the town had an estimated population of 6000.
Five miles south of here is Eagan Canyon where one of the oldest gold mines in Nevada was located. A stage station was located by Major Howard Egan in 1859 for Woodward and Chorpenning's California Mail Co. In 1860 it was used by the Pony Express as a change station and from 1861 to 1869 it was an Overland Stage station. In 1864 a five-stamp mill, the first such in eastern Nevada, and a small mining camp, were constructed. Most of the early activity had ceased by 1883 but in 1897 there was a great revival in mining activity which lasted into the early 1900s. During this period, prior to the completion of the Nevada Northern Railroad in 1906, freight and passenger traffic was via long strings of massive freight wagons and stagecoaches from Toano and Wells. In 1933, the old mine was reopened and a new camp was built. Production from the Egan mine over the years has been approximately $3,000,000.

Marker Topic: Diamondfield Jack Davis
Address: U.S. Highway 93 in the turnaround at the Nevada-Idaho state line at Jackpot
City: Jackpot
County: Elko
Marker Text: This historical marker commemorates the lasting notoriety of flamboyant western gunman Jackson Lee Davis (1870-1949), who was better known by the colorful name, "Diamondfield Jack." As a young man, after unsuccessfully prospecting for diamonds in the nearby hills, Davis was jokingly called "Diamondfield Jack," a nickname that he carried the rest of his life.
In the late 1890s, Davis gained a measure of fame as a gunman for the cattle interests, including rancher John Sparks, who would later become a Nevada governor, that were attempting to restrict sheep ranchers from southern Idaho and northeastern Nevada rangelands. Following a sensational trial in 1896, Davis was convicted of murdering two sheepherders. He was sentenced to be hanged, even after others confessed to the murders. In 1902, Davis was finally pardoned for the crimes. He moved to the central Nevada mining towns of Tonopah and Goldfield, where he became a successful mine operator. He also helped found several mining camps, including one called Diamondfield. In later years, he drifted into obscurity and died in Las Vegas in 1949 after being struck by a car.

Marker Topic:
Address: State Route 278, seventeen miles northwest of Eureka
City: Eureka
County: Eureka
Marker Text: The first known explorer of Diamond Valley was Colonel John C. Fremont, who mapped the area to aid western migration in 1845. Before Fremont, tribes of Shoshone and Paiute Indians long had gathered nature's bounty here. Colonel J.H. Simpson mapped a route through the valley in 1859. The Simpson route, through the north end of the valley, immediately became the Pony Express route from 1860-1861. The Overland telegraph replaced the Pony Express and also crossed the valley. Early freight toll roads were operated across the valley as lead and silver mining camps boomed in the 1860s. Needs of the mining camps gave rise to a limited livestock and dairy industry. In 1957, a large underground lake was tapped to supply water for irrigation.

Marker Topic: Fort Halleck Military Reservation (1867-1886)
Address: Interstate Highway 80 at the Halleck Interchange east of Elko
City: Elko
County: Elko
Marker Text: Established as Camp Halleck by Captain S.P. Smith July 26, 1867, to protect the California Emigrant Trail and construction work on the Central Pacific Railroad. The Camp was named for Major General Henry Wager Halleck, at that time Commander, Military Division of the Pacific. In May, 1968, it became headquarters for the Nevada Military District when Fort Churchill was abandoned. On April 5, 1879, it became Fort Halleck. The nine-square mile reservation was set aside October 11, 1881. The fort was a two-company post, with about 20 buildings of wood, adobe and stone construction, arranged around the side of a rectangular parade ground. Troops from the fort took no part in local Indian troubles. However, they saw action in February, 1873, against the Modoc Indians of northern California; against the Nez Perce uprising in Idaho in 1877; in 1878, against the Bannocks in Oregon; and against the Apaches in Arizona, 1883.
The fort was closed December 1, 1886.

Marker Topic: Humboldt Wells
Address: Interstate Highway 80 at the Union Pacific Railroad overpass
City: Wells
County: Elko
Marker Text: These springs, seen as marsh spots and small ponds of water in the meadows here, are the Humboldt Wells, a historic oasis on the California Emigrant Trail. Here, during the period 1845-1870, hundreds of covered wagons each year rested and refitted from their arduous journeys up Raft River, past the City of Rocks, across the Goose Creek Range and down Thousand Springs Valley, and prepared for the grueling 300-mile trek along the Humboldt Valley. Ruts of the old emigrant trail winding down to the springs may yet be seen on the slopes above them and to the northwest. The City of Wells, first established as the water stop of Humboldt Wells on the Central Pacific Railroad in September, 1869, is named for these springs. Its name was shortened to Wells in 1873.

Marker Topic: Palisade
Address: State Route 278, ten miles south of Carlin
City: Carlin
County: Eureka
Marker Text: Located in the tank-like depths of Palisade (12-Mile) Canyon, Palisade--first named Palisades--was surveyed and laid out by the Central Pacific Railroad in February, 1870. During the 1870s, it rivaled Elko and Carlin as a departure point on the Central Pacific for wagon, freight and stage lines to Mineral Hill, Eureka and Hamilton.
In October, 1875, with completion of Eureka and Palisade Railroad, Palisade became the northern terminus and operating headquarters for this little 90-mile narrow gauge line stretching southward to Eureka. Between 1875 and 1930, the town was the principal transfer and shipping point on the Central Pacific (Southern Pacific) and on the Western Pacific Railroad after its 1910 completion. At its peak, the town boasted a population of 300. It was a self-contained community, and railroading was its business. There were passenger and freight stations, and sidings on both the Southern Pacific and Western Pacific Railroads, and a large ore transfer dock between the narrow gauge and standard gauge lines. All Eureka and Palisade (Eureka-Nevada after 1912) headquarter facilities were situated here. After the little narrow gauge line ran its last train in September, 1938, Palisade went into a long decline. The post office was finally closed in 1962.

Marker Topic: Pilot Peak
Address: Interstate Highway 80, ten miles west of Wendover
City: Wendover
County: Elko
Marker Text: The high, symmetrically shaped mountain seen rising to the north is Pilot Peak. In the period 1845-1850, it was a famous landmark and symbol of hope and relief to the Reed-Donner Party and all other wagon train pioneers who traveled the 70-odd deadly, thirst and heat-ridden miles of the Great Salt Lake Desert. Across this desert, between the Cedar Range on the east and Pilot Peak on the west, stretched perhaps the worst section of the infamous Hastings Cutoff of the California Emigrant Trail. The peak was named by John C. Fremont on his expedition of 1845. Kit Carson, the expedition's guide, was sent ahead to locate water and found a line of springs at the peak's eastern base, now known as McKellar Springs. Carson is reputed to have guided the rest of Fremont's expedition across the salt desert by sending up smoke signals from the peak; hence, Fremont's name for it. During the years 1847-1850, relief parties sallied forth periodically with water from the Pilot Peak springs to rescue and succor the thirst-crazed emigrants and their livestock struggling across the terrible salt desert to the east.