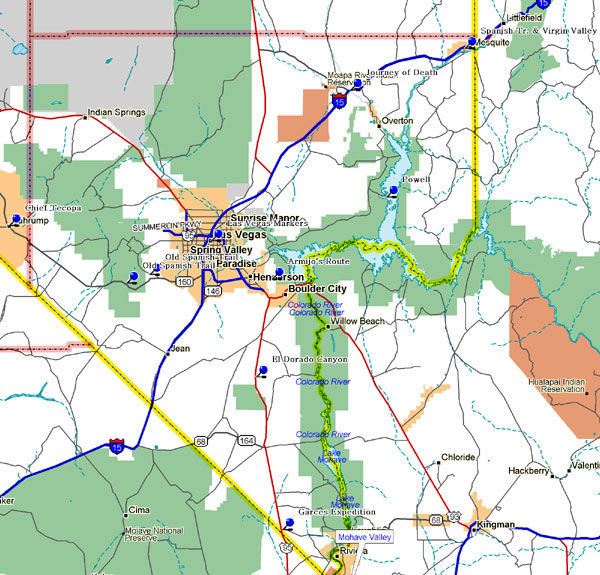 Described as the "longest, crookedest, most arduous pack mule route in the history of America," Armijo's party brought manufactured goods to Los Angeles and returned driving herds of mules and horses. Later termed the Old Spanish Trail, this route was a principal means of reaching the Pacific Coast until the termination of the war with Mexico in 1848.

Marker Topic: El Dorado Canyon
Address: U.S. Hwy 95 near Nelson
City: Nelson
County: Clark
Marker Text: Toward the Colorado River from this point runs El Dorado Canyon where occurred one of the biggest mining booms in Nevada history. Gold and silver were discovered here about 1859, and soon rich mines were developed. In the 1860s the canyon was bursting with a rowdy population of nearly 500 men, many of these said to be deserters from the Civil War.

The river was navigable at the time, making it possible to bring in food and supplies by boat. Notorious for its feuds and shootings, the canyon was equally well known for its three largest mines, The Techatticup, Wall Street and Savage, which yielded $5,000,000 during 40 years of operation.

Marker Topic: Old Spanish Trail - Garces Expedition
Address: Junction of U.S. Hwy 95 and State Route 163
County: Clark
Marker Text: Seeking to open a land route between Tucson and California, Fray Francisco Garces was the first European to enter Nevada. By the end of February 1776 he had reached the Mojave Villages located a few miles southeast of this location on the Arizona bank of the Colorado River. The Franciscan father traveled alone in areas never before seen by a white man.

Relying on Indian guides, he walked from village to village. The Mohaves agreed to lead him to the coast along a trail used for trade purposes. On March 4, 1776, accompanied by four natives, Garces crossed the Colorado River and reached the San Gabriel (California) Mission 20 days later.

His route followed a much older prehistoric trail used to bring shells and other trade goods to the tribes of the mountain and desert West.

He was the first European to enter Nevada.

Marker Topic: Old Spanish Trail - Journey of Death
Address: Interstate Hwy 15 at the Ute Interchange
County: Clark
Marker Text: Early Spanish traders named the 55 dry miles separating Las Vegas and the Muddy River the Journada del Muerto (Journey of Death). This longest stretch without water along the Old Spanish Trail was littered with the skeletons of animals and parts of wagons abandoned along the sandy desert. Most experienced travelers made the trip at night.

John C. Fremont crossed the Journada in 1844 and commented: "We ate the barrel cactus and moistened our mouths with the acid of the sour dock. Hourly expecting to find water, we continued to press on to midnight, when after a hard and uninterrupted march of 16 hours, our wild mules began running ahead; and in a mile or two we came to a bold running stream (the Muddy River.)"

Marker Topic: Kyle (Kiel) Ranch
Address: Kyle Ranch Park, Carey and Losee Road
City: North Las Vegas
County: Clark
Marker Text: Established by Conrad Kiel in 1875, this was one of the only two major ranches in Las Vegas Valley throughout the 19th century. The Kiel tenure was marked by violence. Neighboring rancher Archibald Stewart was killed in a gunfight here in 1884. Edwin and William Kiel were found murdered on the ranch in October 1900.

The San Pedro, Los Angeles and Salt Lake Railroad purchased the ranch in 1903 and later sold it to Las Vegas banker John S. Park, who built the elegant white mansion.

In the late 1950s business declined and the ranch was sold. In 1976, 26 acres of the original were purchased jointly by the City of North Las Vegas and its Bicentennial Committee as a historic project.

Marker Topic: Las Vegas - The Meadows
Address: West Charleston Avenue and Valley View Road
City: Las Vegas
County: Clark
Marker Text: The famous Las Vegas Springs rose from the desert floor here, sending two streams of water across the valley to nurture the native grasses and create lush meadows in the valley near Sunrise Mountain. The water gushed forth with such force that a man could not sink in the Springs.

The natural oasis of meadow and mesquite forest was the winter homeland of Paiutes, who spent the summers in the Charleston Mountains.

An unknown Spanish-speaking sojourner, whether padre, trapper or trader, named Las Vegas "The Meadows," and marked it as such on a map of the Southwestern Desert.

Antonio Armijo stopped at the Springs in 1829-1830, traveling a route which became known as the Old Spanish Trail. After 1830, the route was traveled by Spanish traders, emigrants and frontiersmen, who rested beside the Springs. On one of his western exploration trips, John C. Fremont camped here on May 3 1844.

Because of artesian water here, Mormons established the Las Vegas Mission and Fort in 1855; the Valley became a huge cattle ranch from 1866 to 1904; and the San Pedro, Los Angeles & Salt Lake Railroad Company acquired water rights and land and created the City of Las Vegas in 1905.

Mrs. Helen Stewart, owner of the property from 1882 to 1903, expanded the ranch to 1800 acres, which she sold to the San Pedro, Los Angeles & Salt Lake Railroad Company as the Las Vegas townsite, auctioned on May 15, 1905, starting contemporary Las Vegas.

One of the Fort houses remains as a monument to the 1855 pioneers.

Rivera's pioneering route became a vital link in the Old Spanish Trail, with Las Vegas Springs a most essential stop on this popular route to Southern California. John C. Fremont mapped the trail in 1844. Three years later, following an extension of the course to Salt Lake Valley, the route became known in this area as the Mormon Trail.

Address: State Route 160
City: Mountain Springs Summit
County: Clark
Marker Text: Stretching for 130 miles across Clark County, this historic horse trail became Nevada's first route of commerce in 1829 when trade was initiated between Santa Fe and Los Angeles. The trail was later used by the wagons of the "49ers" and Mormon pioneers. Concrete posts marking the trail were erected in 1965.

Powell of the Colorado

Marker Topic: Powell of the Colorado
Address: Echo Bay at the end of the road
City: Echo Bay
County: Clark
Marker Text: On August 30, 1869 Major John Wesley Powell landed at the mouth of the Virgin River about 12 miles south of here, thus ending the first boat expedition through the Grand Canyon of the Colorado River. The expedition left Green River City, Wyoming Territory, on May 24, 1869. For three months Powell and his men endured danger and hunger to explore, survey and study the geology of the canyons along the Green and Colorado Rivers.

Exhausted and near starvation, the Powell party was warmly greeted and fed by the hardy Mormon pioneers of St. Thomas, a small farm settlement about 11 miles north of here. The original sites of St. Thomas and the junction of the Virgin and Colorado Rivers are now beneath the waters of Lake Mead.

This and later Powell surveys stimulated great interest in the water conservation problems of the Southwest.

Marker Topic: Chief Tecopa (Peacemaker of the Paiutes)
Address: Southern Paiute Cemetery
City: Pahrump
County: Nye
Marker Text: Chief Tecopa was a young man when the first white man came to southern Nevada. As the leader of the Southern Paiute tribe, he fought with vigor to save their land and traditional way of life. He soon realized, however, that if his people were to survive and prosper he would have to establish peace and learn to live in harmony with the foreigners. During his life span, which covered almost the entire 19th century, his energy and time were devoted to the betterment of his people. Chief Tecopa is honored for the peaceful relations he maintained between Southern Paiute Indians and the white men who came to live among them.

Marker Topic: Virgin Valley
Address: Interstate Hwy 15
City: Mesquite
County: Clark
Marker Text: Virgin Valley was traveled by Jedediah Smith in 1826 and by Fremont in 1844. The valley served as the right-of-way for the Old Spanish Trail (1829-1848) and for the Mormon road or southern route of travel to southern California.

The area was settled by pioneers of the Latter-Day Saints Church, who colonized Blunderville in 1877 and Mesquite in 1880.

The Virgin River provided water for the development of the valley's agricultural resources.