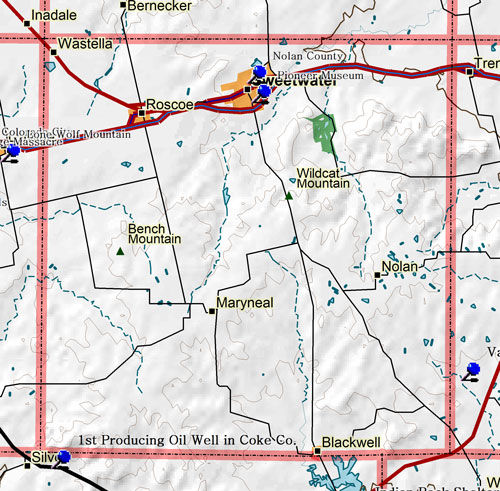 Marker Title: Nolan County
Address: Broadway St.
City: Sweetwater
County: Nolan
Year Marker Erected: 1975
Marker Location: Courthouse Square, Broadway Street, Sweetwater
Marker Text: Nomadic Indians crossed this region before Anglo-American pioneers arrived here in the 1870's. The first settlers were buffalo hunters such as I.S. (Tuck) Focht, who later became a rancher and businessman, and cattlemen such as confederate veteran John R. Lewis. Created in 1876, Nolan County was one of 54 countries carved from Bexar Territory. It was named for Philip Nolan (1771-1801), an Irish-born adventurer who came to Texas to capture wild horses and was killed in a skirmish with Spanish soldiers. Sweetwater, a small settlement that had grown up around a general store, was awarded the county's first post office in March 1879. It was also named the county seat when Nolan County was organized in January 1881. Sweetwater moved 2 miles northwest to its present location on the Texas & Pacific Rail Line in April 1881. It became an important rail center when the Kansas City, Mexico & Orient and later the Santa Fe Railroad also routed their track through the town. The economy of Nolan County is based on cattle and sheep ranching; cotton and feed grain crops; and gypsum, line, and petroleum production. The population of the county increased from 640 in 1880 to 16,220 in the 1970 census. (1975)