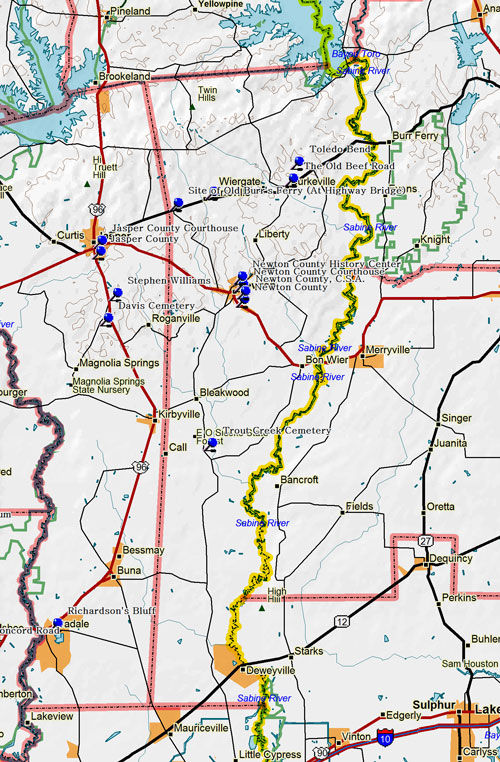 Marker Title: The Old Beef Road
City: Burkeville
County: Newton
Year Marker Erected: 1973
Marker Location: 8 mi. N of Burkeville on SH 87, 1/4 mi. S of Juc. SH 87 & R 255.
Marker Text: Early 19th century trade routes across the Sabine River were few, and served all travelers and traders. The Beef Road, which replaced earlier "Zavala Road", was an important route by 1840, crossing this area. Named for cattle trade, it began in Huntsville and Liberty regions, and ran through Zavala, Jasper, and into present Newton County, where it forked near this site, forming three routes. The northern fork, to Natchitoches, crossed the Sabine at Bevil's Ferry (later Haddon's); The middle route, to Alexandria, led to Hickman's Ferry (later Burr's): The southern branch, to Opelousas, crossed at New Columbia. The cattle were corraled at night in "beef pens", located at points along the trails, including Weeks' Chapel and Toledo. During the Civil War, the Beef Road was an important supply artery to the Confederate states, until the Federal army gained control of the Mississippi River in July 1863. This halted the eastern cattle drives. Sabine River crossings were fortified against attack, as the roads would be a necessity for an invading force, but the expected invasion never came. Railroad expansion into Kansas, in the late 1860s, diverted the cattle drives to the North, and led to decline of Beef Road as a major cattle trade route.

Marker Title: Site of Old Burr's Ferry (At Highway Bridge)
City: Newton
County: Newton
Year Marker Erected: 1968
Marker Location: SH 63 just before Lousianna Border next to stone TX monument.
Marker Text: An important communications point between Texas and the United States, especially during settlement era of early 1800's. Named for Dr. Timothy Burr (1790-1852), second cousin of U. S. Vice President Aaron Burr. Dr. Burr is said to have come to the Sabine area in 1809, but moved his family down from Ohio in 1820's. He practiced medicine from home plantation on the Sabine. Family operated the ferry in the 1840's. Town of Burr's Ferry grew up on east side of the river. This crossing (earlier called Hickman's Ferry) gave pioneers the means to enter Texas with their stock, household goods,and other property. It was one of four main points of entry on Texas-Louisiana border. Besides the famous El Camino Real (King's Highway) from Natchitoches, other entry roads were the "Upper" route, from present-day Shreveport; "Lower" route, from Opelousas; and this one, called "The Old Beef Trail" because it was used to drive thousands of cattle from Texas to Alexandria for shipment to such cities as New Orleans, as early as the 1820's and 30's. This crossing was considered strategic in 1860's, during the Civil War. Breastworks were built on east bank, and timber cleared here on west bank, in effort to guard against Federal invasions.

Marker Title: Newton County Courthouse
City: Newton
County: Newton
Year Marker Erected: 1974
Marker Text: This Courthouse was preceded by one built in Burkeville in 1848, and another erected on this public square in 1853. It is a Second Empire style edifice, with an unusual truncated clock tower, mansard roof, and corner quoins, built in 1902-03 by contractors Martin & Moody of Comanche; from brick made on nearby Caney Creek. The interior was altered in 1910 and 1925, and the jail added in 1936. Restored in 1972-73. Recorded Texas Historic Landmark - 1974

Marker Title: Newton County, C.S.A.
City: Newton
County: Newton
Year Marker Erected: 1965
Marker Location: About 3 mi SE of Newton on US 190 in roadside park.
Marker Text: Supply and military center in the Civil War. Target area for Federals trying to move up the Sabine or across Louisiana and take Texas. Confederates built breastworks and maintained arsenal at Burkeville. Major supply route, "The Old Beef Trail", begun 1823 through area later Newton County. Was a road taken by thousands of cattle being sent from Texas to feed armies and civilians as far eastward as Mobile, Ala. Sabine ferries were equipped with cattle pens: Also ferrymen kept oxen trained to lead herds swimming across the river. Some local beef went eastward, too. Farrsville, a town founded about 1850 on Cow Creek, had a military campground and corrals furnishing fresh stagecoach teams. Its tanning vats and shops made boots and shoes for the Confederacy. Its water mills ground corn for bread, sawed lumber, ginned cotton-- products used in supplying the South. The commissioners court made appropriations to outfit military units (buying horses for men unable to furnish their own), aid dependent families, and supply the people with cotton cards to turn the lint into batts for spinning, weaving and knitting. The county, which had voted 178 to 3 for secession, sent about 400 soldiers into the Confederate army.

Marker Title: Toledo Bend
City: Burkeville
County: Newton
Year Marker Erected: 1982
Marker Location: FM 692, 15 mi N of Burkeville at Toledo Bend Dam power station.
Marker Text: The Sabine River's Toledo Bend has played a major role in the history of East Texas. An area initially inhabited by Indians and buffalo, it was a landmark for Spanish explorers and missionaries. The latter possibly named it for a similar bend in the River Tagus at Toledo, Spain. It might also have been named for Gen. Jose Alvarez de Toledo, who camped here after his defeat in the 1813 Battle of the Medina. Toledo Bend was located on the western edge of the Neutral Territory, the border area disputed by the United States and Spain during the early 1800s. Situated a few miles south of El Camino Real, the King's Highway, it became a major route of trade and migration. It was also the site of steamboat landings and a crossing of the Old Beef Trail. Anglo-Americans arrived before 1820 and the bend became known as Bevil's Crossing and later Hadden's Ferry. It developed under such leaders as W. C. Lenahan, farmer, merchant, ferry operator and postmaster. The area became a center of the southeast Texas pecan industry through the work of Mrs. W. A. Steele, who planted the first trees, and R. L. Odom, who patented several varieties of pecans. A region rich in history, Toledo Bend is now a major resort area of Texas.

Marker Title: Trout Creek Cemetery
City: Newton
County: Newton
Year Marker Erected: 1989
Marker Location: FM 1004 W of Juc. FM 1004 & SH 87, Trout Creek
Marker Text: Originally a part of the James West Survey, this cemetery dates to the early 1860s. The land was later owned by Mrs. Frances Ann Dyer (d.1890), and upon her death was inherited by her daughter Udora Dyer Ratcliff (1862-1898) and son-in-law K.R. Ratcliff (1857-1946). Although local oral tradition holds that the earliest burials here were those of area Indians or slaves from the Salem community, the oldest documented graves are those of John G. Barnett (1799-1861) and his wife Christina (1817-1863). Also interred in this cemetery are Frances Ann Dyer, although her grave is not marked, and K.R. and Udora Dyer Ratcliff. Six Civil War veterans (Andrew Jackson Herrin, Stephen B. Herrin, William Henry Jarvis Holmes, Thomas Harrison Holmes, Jeremiah Patrick O' Brien, and J.R. Sise) are buried here, as are veterans of World War I, World War II, and Korea. The Trout Creek Cemetery Association, whose members have cared for the historic graveyard since the turn of the century, was officially chartered in 1973. An important part of Newton County history, the Trout Creek Cemetery stands as a reminder of the area's pioneer heritage.