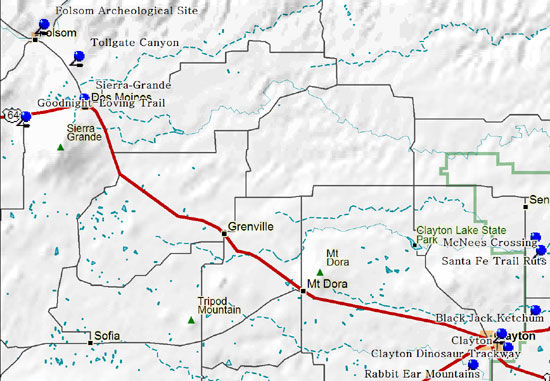 Thomas "Black Jack" Ketchum, leader of a notorious band of train robbers, was wounded in August 1899 while trying to rob a train near Folsom. He surrendered the next day. He was tried and convicted under a law making train robbery a capital offense, and hanged at Clayton on April 26, 1901.

Trade caravans and homesteaders traveling the Cimarron Cutoff of the Santa Fe Trail passed near here. Clayton was founded in 1887 and named for the son of cattleman and ex-Senator Stephen W. Dorsey, one of it developers. It became a major livestock shipping center for herds from the Pecos Valley and the Texas Panhandle.

One of the best dinosaur track sites in the world can be viewed at Clayton Lake State Park. More than 500 fossilized footprints, made by at least eight kinds of dinosaurs, are visible on the lake's spillway. These tracks were embedded in the mud over 100 millions years ago, when most of New Mexico was a vast sea.

Near here was the site of the discovery of a spear point between the ribs of an extinct species of bison. This find established man's presence in North America about 10,000 years ago, prior to the extinction of large mammals at the end of the last Ice Age.

In order to avoid the high toll charged for each animal on the Raton Pass branch of the Goodnight-Loving Trail, Charles Goodnight blazed this route through Trinchera Pass in 1868. Because it was shorter, had easier grades, and was toll-free, later cattle drives followed Goodnight's example.

Here the Santa Fe Trail crossed the North Canadian River. The site is named for two young men, McNees and Monroe, who were shot at this crossing in 1828. Here too, a group of travelers celebrated Independence Day in 1831, the first documented 4th of July observation on the plains. Original trail ruts can still be seen near the crossing.

These two striking mounds were the first features to become visible to Santa Fe Trail traffic crossing into New Mexico from Oklahoma, and so became important landmarks for caravans. From here, traffic on this major 19th century commercial route still had about 200 miles to travel before reaching Santa Fe.

From 1821 until the railroad arrived in New Mexico in 1879, thousands of wagons hauled freight along the Santa Fe Trail between Missouri and Santa Fe. These wagons carved ruts which have since eroded and deepened, creating a wide swath which is the only visible remains of the Trail. Ruts of the Mountain Branch of the Trail can be seen 1.2 miles ahead.

Between 1871 and 1873, Brazil Metcalf constructed a toll road from the Dry Cimarron through Tollgate Gap providing one of the few reliable wagon roads between Colorado and northeast New Mexico. This road remained an important commercial route until the Colorado and Southern Railway came through this area in the late 1880s.