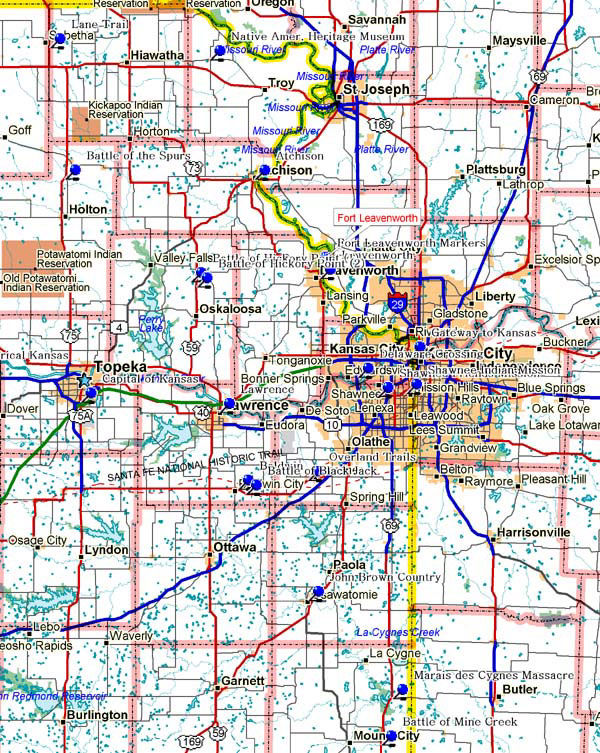 Marker Topic: Baldwin
Address: US-56, Roadside turnout, .5 miles east of Baldwin City
City: Baldwin City
County: Douglas
Marker Text: Here, and for the next 300 miles west, Highway 56 roughly follows the old Santa Fe Trail, and frequently crosses it. White settlement began in this area in 1854, the year Kansas became a territory, and in 1855 the town of Palmyra was founded. When Baker University was established on the outskirts in 1858 a new town sprang up.

Osawatomie - the name derives from a combination of Osage and Pottawatomie - was settled in 1854 by Free-State families from the Ohio Valley and New England. John Brown, soon to become famous for his militant abolitionism, joined five of his sons at their homes near the new town in October 1855. By the spring of 1856, local defiance of proslavery laws and officials was so notorious that 170 Missourians "punished" the area by looting Osawatomie.

Delaware Crossing and the Grinter Ferry

Just east of this marker, at a point where an old Indian trail led to the water's edge, Moses Grinter established the first ferry on the Kansas River. The year was 1831, and Grinter became the earliest permanent white settler in the area. His ferry was used extensively by travelers over the Fort Leavenworth-Fort Scott military road, and by traders, freighters and soldiers traveling between the forts or to Santa Fe. This place was known as Military or Delaware Crossing, and sometimes as Secondine, and here the first non-military post office in Kansas was established on September 10, 1850.

Marker Topic: Capital of Kansas
Address: US-75 Roadside turnout, 37th Street and South Topeka Avenue
City: Topeka
County: Shawnee
Marker Text: Topeka was founded in 1854 at the site of Papan's Ferry where a branch of the Oregon Trail crossed the Kansas River as early as 1842. Anti-slavery leaders formed the Topeka Constitution - 1855, in the first attempt to organize a state government.

This Gateway to Kansas

Marker Topic: Lane Trail
Address: Rest area at junction south of Sabetha
City: Sabetha
County: Nemaha
Marker Text: Near here the towns of Plymouth and Lexington once stood as outposts on the Lane Trail, approximated today by US-75. Established by James H. Lane in 1856, the trail bypassed proslavery strongholds in Missouri and offered a safe route for free-state settlers entering Kansas.

Marker Topic: City of Leavenworth
Address: US-73, Roadside turnout, K-7 and K-92 junction
City: Leavenworth
County: Leavenworth
Marker Text: Two weeks after Kansas was officially opened for settlement the state's oldest city was born. The date was June 12, 1854, and the town was named for nearby Fort Leavenworth.

Marker Topic: Fort Leavenworth Markers
Address: 7th Street, K-7 and US-24, Leavenworth County
Markers at: 7th Street entrance to Fort Leavenworth; turnout on K-7, 11 miles northwest of city of Leavenworth; turnouts on US-24, .3 miles west and .5 miles east of US-24, US-73, and K-7 interchange
City: Leavenworth
County: Leavenworth
Marker Text: Established in 1827, Fort Leavenworth is the oldest army post in continuous operation west of the Missouri River. Serving as the army's chief base of operations on the Central Plains, the fort furnished troops and supplies for military operations as far away as the Pacific Coast. Troops stationed at the fort were given the task of maintaining peace on the frontier and protecting trade on the newly established Santa Fe Trail. With the establishment of the Oregon-California Trail in the 1840s, travelers on that trail also received protection.

Marker Topic: Marais des Cygnes Massacre
Address: US-69, Roadside turnout, .5 miles north of Trading Post
City: Trading Post
County: Linn
Marker Text: Nothing in the struggle over slavery in Kansas did more to inflame the nation than the mass killing which took place May 19, 1858, about four miles northeast of this marker. Charles Hamelton who had been driven from the territory by Free-State men, retaliated by invading the county with about 30 Missourians.

Battle of Mine Creek

In October 1864, a Confederate army under General Sterling Price was defeated near Kansas City. He retreated south, crossed into Kansas, and camped at Trading Post. Early on the morning of October 25, Union troops under Generals Pleasonton, Blunt, and Curtis forced him from this position, and a few hours later the Battle of Mine Creek was fought over these fields.

Marker Topic: Overland Trails
Address: US-56, Roadside turnout, 1.5 miles southwest of Gardner
City: Gardner
County: Johnson
Marker Text: Here US-56 lies directly on the route of the Oregon-Calirognia and Santa Fe Trails. Nearby, the trails branched. On a rough sign pointing northwest were the words, "Road to Oregon." Another marker directed travelers southwest along the road to Santa Fe.

In 1825 the Federal government began moving Eastern Indians to new lands west of the Mississippi. This sign is on a 2,500 square mile tract assigned to the Shawnees.

Battle of the Spurs

Marker Topic: Battle of the Spurs
Address: US-75, Roadside, 7 miles north of Holton
City: Holton
County: Jackson
Marker Text: Just before Christmas 1858, John Brown "liberated" eleven slaves in Missouri . He hid them in a covered wagon and circled north on the underground railway toward Nebraska and freedom.