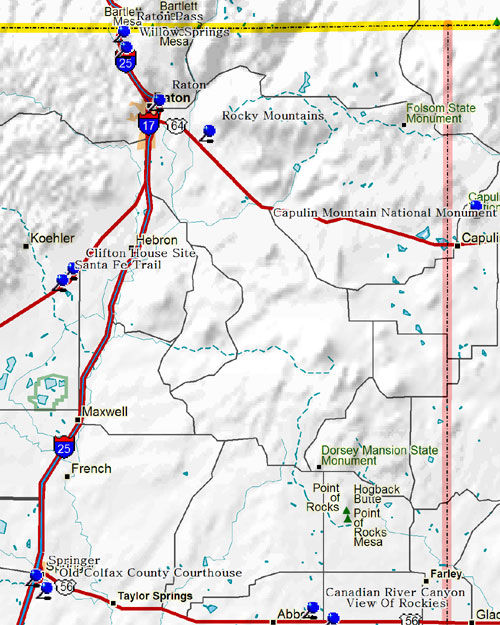 Flowing out of the Rockies, The Canadian River has cut a gorge 600 feet deep through sedimentary strata of the High Plains.

An outstanding example of an extinct volcanic cinder cone, Capulin Mountain was formed as early as 10,000 years ago. In cinder cones, lava pours from cracks in the base rather than over the top. Capulin itself was the escape hatch for gases that blew lava fragments into the air where they solidified and landed red hot on the cone.

Three-quarters of a mile west of here at the Canadian River crossing was the popular overnight stage stop on the Old Santa Fe Trail. Clifton House was built in 1867 by rancher Tom Stockton, and materials were brought here overland from Dodge City. For years it served as headquarters for cattle roundups. After abandonment of the Santa Fe Trail in 1879, it fell into disuse and burned.

Built in 1879 at a cost of $9,800, this building served as Colfax County Courthouse from 1882 through 1897, when the county seat was moved to Raton. This building housed the New Mexico reform school for boys from 1910 to 1917 and has been a public library, town hall and city jail.

Once the Willow Springs freight stop on the Santa Fe Trail, the town of Raton developed from A.T.& S.F. repair shops established when the railroad crossed Raton Pass in 1879. Valuable coal deposits attracted early settlers. Nearby Clifton House was a stagecoach stop until the Trail was abandoned after 1879.

This important pass on the Mountain Branch of the Santa Fe Trail was used by Brigadier General Stephen Watts Kearny for his 1846 invasion of New Mexico, and by Colorado Volunteers who defeated the Confederates in 1862. Richens L. "Uncle Dick" Wooten operated a toll road from 1866 to 1879, when the Santa Fe Railroad crossed the pass.

The Sangre de Cristo ranges on the Southern Rocky Mountains visible here include the Spanish Peaks in Colorado, and the Culebra and Cimarron Ranges in New Mexico. Reaching altitudes of more than 13,000 feet, the well watered and forested mountains offer numerous recreational activities including skiing, hiking, fishing, hunting and climbing.

William Becknell, the first Santa Fe Trail trader, entered Santa Fe in 1821 after Mexico became independent from Spain and opened its frontier to foreign traders. The Mountain Branch over Raton Pass divided here. One fork turned west to Cimarron then south and joined a more direct route at Rayado.

The difficulty of bringing caravans over rocky and mountainous Raton Pass kept most wagon traffic on the Cimarron Cutoff of the Santa Fe Trail until the 1840s. Afterwards, the Mountain Branch, which here approaches Raton Pass, became more popular with traders, immigrants, gold-seekers, and government supply trains.

Located in the old Maxwell Land Grant and near the Cimarron Cutoff of the Santa Fe Trail, Springer served as Colfax County seat from 1882 to 1897. Several men were killed here in one of the late flare-ups of the Colfax County War, a dispute between land grant owners and settlers.

View of the Rockies

Reaching altitudes of more than 13,000 feet, well watered, and forested, the Rocky Mountains are host to numerous recreational activities including skiing, fishing, hunting, and camping. To the north can be seen numerous volcanic peaks that lie east of the Rocky Mountains in both Colorado and New Mexico.

Treeless grasslands of the High Plains cover the eastern one-third of New Mexico and stretch eastward into the mid-continent. Surface water from the mountains beyond and underground aquifers permit ranching as the principal economic activity. Carbon dioxide gas, a geologic resource, has been discovered and developed in the subsurface.

In 1861, the U.S. Army established a government forage station here by a small spring. A well was dug, and the station became a water stop for Barlow and Sanderson stagecoaches. With the arrival of the railroad in 1879 and the founding of Raton, the station was incorporated into the new town and eventually was razed.