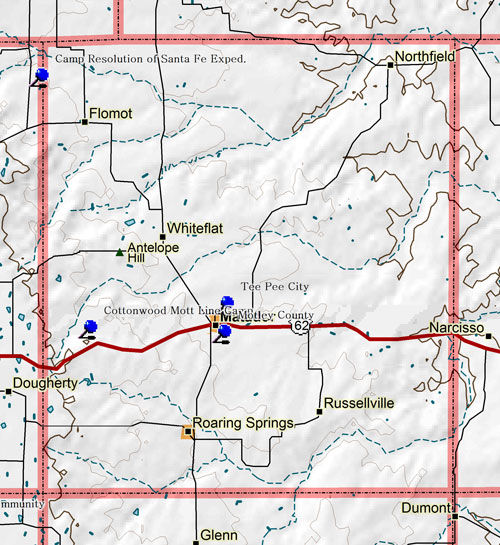 Marker Title: Cottonwood Mott Line Camp
Address: Off US 70, about 13 mi. W of Matador on private rd.
City: Matador
County: Motley
Year Marker Erected: 1986
Marker Location: From Matador, take U.S. 62/70 west about 13 mi., then follow gravel road about 3 miles N
Marker Text: (Private Property) The Cottonwood Mott, named for the stand, or mott, of trees which surrounded a natural spring here, was the site of a line camp as early as 1878. Cowboys used the camp as a base from which to work, herding cattle and mending fences on the ranch. A log cabin was built here by employees of the Jingle Bob Ranch, and was the site of at least two gunfights. The ranchland was sold in 1882 to the Matador Land & Cattle Company, LDT., a Scotland-based syndicate. The company sold out in 1951, and the land was divided into smaller ranches. Texas Sesquicentennial 1836-1986

Marker Title: Tee Pee City
Address: US 62/70
City: Matador
County: Motley
Year Marker Erected: 2002
Marker Location: Roadside Park, 10 mi. E on 62/70
Marker Text: Tee Pee City At the junction of the Middle Pease River and Tee Pee Creek (8 mi. NNE), is the site of Tee Pee City. In the 1870s, traders established an outpost there to take advantage of the area's buffalo hide trade. The small community of picket houses and tents derived its name from abandoned tipi (tee pee) poles found along the creek. Charles Rath, an important figure in West Texas history, was among the partners in the original operation that resulted in the formation of the settlement, bringing in wagons, cattle, mules and dace hall equipment. Rath then continued south to establish his headquarters on the Double Mountain Fork of the Brazos, leaving management of the Tee Pee City camp to others. An 1877 account of the settlement identified one or two saloons, a dance hall, gambling hall and two-room hotel, as well as other businesses. The 1880 census listed 12 residents. The R.V. Fields and A.B. Cooper families arrived in 1879, the same year Tee Pee City's post office opened. By then, few buffalo remained in the area. Hunters had killed thousands, nearly depleting the southern herd. Cooper freighted supplies and ran a general store out of a dugout. The community supported a post office (1879-1900), as well as a school (1895-1902), but Tee Pee City was best known for its rowdiness, brawls and shootings, which warranted the attention of G.W. Arrington's Texas Rangers. In 1904, the Matador Land and Cattle Company bought the land and closed down the saloon, which had been off limits to Matador employees due to its wild reputation. A 1936 state monument placed at the townsite was moved here in 2002. Little remains at the original site, now on private land. (2002)