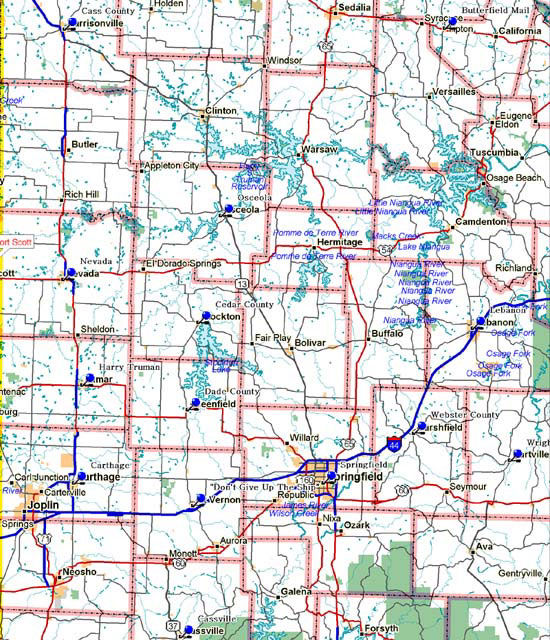 Marker Topic: Carthage
County: Jasper
Marker Text: A limestone of magnificent color and hardness was first quarried in 1880. Among buildings of this stone is the Missouri State Capitol. Carthage was the scene of the second major engagement of the Civil War in Missouri. It was burned to the ground by Southern guerrillas in 1864. In the Battle of Carthage, July 5, 1861, some 4000 armed and 2000 armed State Guardsmen led by deposed Gov. Claiborne F. Jackson, forced Union Col. Franz Sigel's 1100 troops to fall back and cleared the way for joining with other State Guards and with Confederate troops, thereby gaining time to equip and train the pro-Southern troops of Missouri.

Carthage, on the banks of Spring River, lies in a region where western prairie and Ozark Highland meet. This area was part of the territory held by the Osage Indians until their 1825 land cession to the US. After Carthage was burned Sept. 22, 1864, Cave Spring was temporary county seat until 1866.

Marker Topic: Cassville
County: Barry
Marker Text: In the Civil War, Cassville served as the Confederate Capital of Missouri for eight days, October 31 to November 7, 1861. After Missouri's pro-Southern government was ousted by the State Convention, it met first at Neosho in Newton County. There it passed an ordinance seceding Missouri from the United States and an act ratifying the Provisional Confederate Constitution. The approach of Union troops forced flight to Cassville. Here the "Rebel Legislature" chose delegates to the Confederate Congress and Gov. Claiborne E. Jackson is thought to have signed the ace of secession. In the Civil War, Union troops occupied Cassville as an area headquarters and ravaging guerrilla warfare tore the countryside.

As the devastating effects of the Civil War began to fade and with the coming of the St. Louis and San Francisco RR in the late 1870s, the county began to prosper. The railroad, by advertising the 140,000 acres of Barry County land it owned, brought a large immigration. Several foreign colonies were established in the region. When the Frisco R.R. was laid through Barry County, Cassville was bypassed by five miles and a connecting line, the Cassville and Exeter R.R. was laid in 1896.

Marker Topic: Harry Truman
County: Barton
Marker Text: Lamar is distinguished as the birthplace of Harry S. Truman, the 33rd President of the United States. The son of John Anderson Truman and Martha Ellen (Young) Truman, he was born May 8, 1884. Highlights of his administration include the end of WWII, ratification of United Nations Charter, establishment of Atomic Energy Commission, unification of Armed Services, and :"police action"; through U.N in Korea.

Osage Indians gave up claims to the area in their 1808 and 1825 land cessions. In the Missouri-Kansas Border War, 1854-59, lawless bands ranged the county and in the Civil War terror and disorder characterized the region. Quantrill and his guerrilla band raided and burned Lamar, occupied by Union troops, November 5 and 11, 1862. The town was again burned by raiders, May 28, 1864. Almost depopulated at war's close, Lamar and Barton County slowly recovered.

Marker Topic: McDonald County
County: McDonald
Marker Text: Pioneers were from Kentucky and Tennessee. The 1840s brought the "Pine War" between settlers and U.S. Marshals over cutting trees on public land. In the 1850s, bands of "Slickers" briefly tried to stop land sales. In the War Between the States, this pro-Southern county on Arkansas and Oklahoma borders saw heavy troop movement, sharp skirmishes, and guerrilla raids. Over the border in Arkansas is historic Pea Ridge Battlefield, site of decisive Union victory March 7-8, 1862.

Marker Topic: Nevada
County: Vernon
Marker Text: Settled largely by Southerners, Nevada and Vernon Counties were deeply involved in the Kansas Border War, 1854-1859, over extension of slavery. One of the raids of the time was made by John Brown into north Vernon County. During the Civil War the area was overrun by troops of both sides and guerrilla raiders. Federal militia burned Nevada to the ground, May 26, 1863. After the war, Nevada prospered with the coming of the M.K.T. Railroad in 1870 and the Missouri Pacific branch in 1882.

Marker Topic: Osceola
County: St. Clair
Marker Text: Settled during the mid-1830s largely by Southerners. The settlement and its first store were known as the "crossing of the Osage at Crow and Crutchfield's" until the name of the Indian warrior was adopted. In 1841 Osceola became the seat of newly organized St. Clair County named for Gen. Arthur St. Clair of the Revolutionary War. In the Civil War Osceola was the first town of wealth and consequence victimized in the atrocious raids characteristic of the war on the Missouri-Kansas border. Kansas troops under Gen. James H. Lane on September 23, 1861, looted and burned the defenseless town to ashes.

Marker Topic: Springfield
County: Greene
Marker Text: Springfield was first called Campbell and Fullbright Springs after its first settlers. Rivalry over location of the railroad in 1870 led to founding of North Springfield. The two towns were joined in 1887.

Through here came Cherokee Indians on their "Trail of Tears" removal to Oklahoma in 1837.

In 1858 the first westbound Butterfield Overland Mail coach stopped at its station here.

Springfield was a military prize held by both sides during the Civil War. At Wilson's Creek Battlefield, 3 miles southeast, on Aug. 10, 1861, one of Missouri's bloodiest battles was fought, ending in an important Confederate victory. Union General Nathaniel Lyon was killed leading his outnumbered troops against the combined force of the Confederates and General Sterling Price's Missouri State Guard, both under the command of Gen. Ben McCulloch. The Confederates left Springfield at the approach of the Federals under General S.R. Curtis, Feb. 1862.

For the duration of the war Springfield was under Union control. In Jan. 1863 a Confederate attack under General John S. Marmaduke was repulsed with help of a "Quinine Brigade" of convalescent soldiers. "Wild Bill" Hickok served as Union scout here.