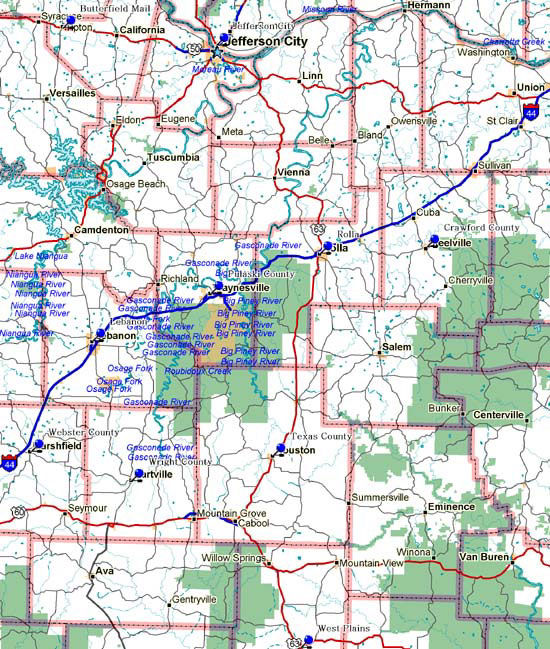 Marker Topic: Crawford County
Address: Steelville
County: Crawford
Marker Text: Crawford County In territory ceded by Osage tribes in 1808, Crawford County was roamed by the Delaware and Shawnee into the period of settlement by Southern pioneers in the early 1820s. Steelville, the county seat, was laid out in 1836, and named for James Steel who sold the 40-acre townsite for $50.

During the Civil War, guerrilla raids and troop movement devastated the area. The Southwest Br. of the Pacific R.R. (now Frisco) built through Bourbon, Leasburg, and Cuba in the county in 1860 was almost destroyed. Union Gen. Thomas Ewing's troops, escaping undetected from Fort Davidson after the battle of Pilot Knob, were overtaken by Confederate Army units at Leasburg and a 36-hour engagement ensued Sept. 29-30, 1864. Confederates withdrew before Union reinforcements arrived. The site is marked.

The Trail of Tears is a tragic tale of force winning over decency and power winning over justice. While the focus today remains on the route traveled and the journey itself, for eight years prior to the event Cherokee were confronted with their future on a daily basis. Illegal stockades were built on Cherokee land, intended to house Cherokee people long before their forced journey on "The Trail of Tears."

During the Civil War, the pioneer road became a military highway. A telegraph line strung from Rolla, Missouri to Fort Smith, Arkansas went along the road by 1862 and the telegraph route soon became known as "The Old Wire Road." Throughout the war, Lebanon was occupied alternately by Union and Confederate troops.

Marker Topic: Pulaski County
County: Pulaski
Marker Text: Here in Missouri's central Ozarks, Pulaski was organized in 1833 and named for the Revolutionary War General, Polish County Casimir Pulaski. Once roamed by Indians and French trappers, the county is part of land ceded by the Osage in 1808. Southern pioneers were early settlers, attracted by fine springs, wooded hills honeycombed by caves, and Big Piney and Gasconade Rivers.

In the Civil War, the Confederate flag was raised at the courthouse in spring of 1861. In June of 1862 Union Col. Albert Sigel"s troops built a fort overlooking Waynesville's courthouse square to guard military supply road to Springfield. The county suffered guerrilla raids and skirmishes. In Pulaski County lies Mark Twain National Forest acreage.

The county after the Civil War grew as a lumbering and general farming area. On route of the Frisco R.R., built through the county in 1869, the towns of Dixon, Crocker, and Richland were laid out and Swedeborg was founded by Swedish immigrants in 1878. Among other communities are Big Piney, Devil's Elbow, Laguey, Palace, and St. Roberts.

Points of interest include views of the Gasconade at Portuguese Point and the Big Piney at Devil's Elbow; Miller Sprint, one of 23 ebb and flow springs in the U.S., near Big Piney, Schlicht Mill near Crocker, Indian and Inca caves near Waynesville, and Moccasin Bend Wildlife Refuge.

Marker Topic: Rolla
City: Rolla
County: Phelps
Marker Text: This Ozark plateau town, 1120 feet above sea level, was a "child of the railroad." On a natural passageway to southwest Missouri midway between St. Louis and Springfield, this site was chosen by the Southwestern Branch of the Pacific Railway for an office and warehouses in 1855.

Early settlers found a source of saltpeter for gunpowder in nearby caves. During the Civil War Rolla, strategically located at the terminus of a railway, was a great Federal military encampment. After Lyon's defeat and death at Wilson's Creek in 1861, his troops retreated here. Curtis with 12,000 men left here for the decisive Union victory at Pea Ridge, Arkansas, in 1862. The sites of Forts Wyman and Dette, within the town limits, recall elaborate Civil War fortifications.

Marker Topic: Texas County
County: Texas
Marker Text: Largest of Missouri's 114 counties, Texas comprises 1183 square miles of Ozark Highland. With the same name as the largest of the 48 states, it exceeds the smallest, Rhode Island, by 125 square land miles. When formed in 1843, it was named for the explorer, fur trader, the first Lt. Gov. of Missouri, William H. Ashley but when formally organized in 1845, it was renamed for the Republic of Texas.

A seat of justice for the county was laid out in 1846 near the center of the county on Brushy Creek and named Houston for first president of the Texas Republic.

In the Civil War, the county was ravished by guerrilla warfare and the town destroyed. Houston's modern development has been as trading center for a dairying, poultry and livestock farming and lumbering area.

By 1862 the telegraph passed near Marshfield on a route later called the "Old Wire Road." A part of the 1808 Osage Indian land cession, the county was settled in the early 1830s by pioneers from Kentucky and Tennessee.

An Indian trail crossed southern Webster County and many prehistoric mounds are in the area.

The railroad building boom of the post Civil War period stimulated county growth as a dairy, poultry and livestock producer. The Atlantic & Pacific (Frisco) was built through Marshfield in 1872 and by 1873 the Kansas City, Springfield and Memphis (Frisco) crossed the county.

Marker Topic: West Plains
County: Howell
Marker Text: In the Civil War, West Plains and Howell County were ravaged by foraging troops and raiding bands. Confederate volunteers escaped encircling Union troops here Feb. 19, 1862 after a skirmish. West Plains was burned by raiders in 1863 and remained uninhabited until the close of the war.

Marker Topic: Wright County
County: Wright
Marker Text: Lies in a region ceded the U.S. by the Osage Indians in 1808. The first white settlers, mainly from Tennessee, came in the 1830s. Hartville was laid out as the county seat. During the Civil War, Hartville was the scene of a bitter day-long battle, January 11, 1863, in which some 2500 Confederates under Gen. John S. Marmaduke encountered about 1000 Federals from Gen. Fitz Henry Warren's command. Victory was claimed by both sides but Confederate loss was heavy. Among colonels on Marmaduke's staff were Joseph O. Shelby (later general) and Joseph C. Porter who was mortally wounded.