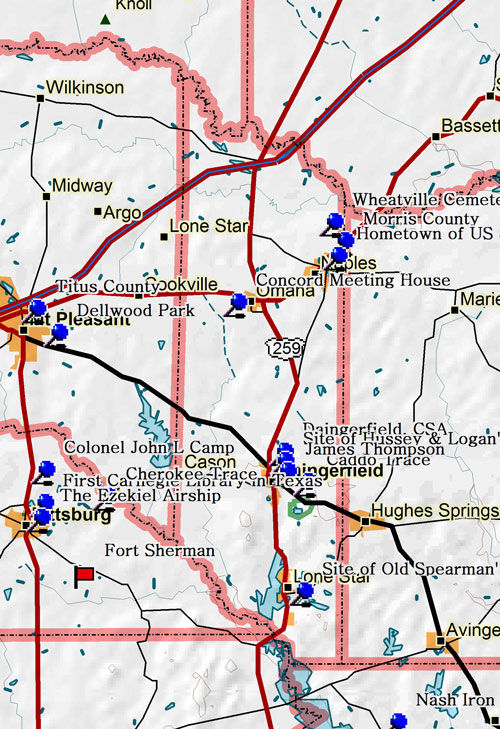 Marker Title: Caddo Trace
City: Daingerfield
County: Morris:
Year Marker Erected: 1967
Marker Location: SH 49/11 east of Daingerfield about 3 mi. across from entrance to Daingerfield State Park
Marker Text: Hunting and trade route for area between Arkansas and Red Rivers; used by Caddo Indians, who occupied the northeast corner of Texas and adjacent states. Like many Indian trails, it was later usurped by whites; after 1840, it became part of stage and mail routes. Teamsters used it transporting goods to market; soldiers marched along it to and from several wars. The trace follows or crosses in places 3 other early trails: Cherokee, Choctaw, and Trammel's. Today state highways 11 and 49 (Hughes Springs to Daingerfield) follow the same general route.

Marker Title: Daingerfield, C.S.A.
City: Daingerfield
County: Morris
Year Marker Erected: 1964
Marker Location: just off US 259 on Coffey St. at old Courthouse
Marker Text: Civil War center for manufacturing, supply and travel. Place of enrollment of several Confederate army units. Local industries supporting the war effort included 3 tanyards-- sidelines of the beef slaughtering trade that helped feed troops and civilians. The tanyards made leather for soldiers' boots and shoes and for Cavalry saddles, bridles and harness. On nearby rivers or ponds were 3 sawmills, one grist (corn meal) mill and a distillery. Foundries in the area were predecessors of the 20th century Lone Star Steel Company. An "old" town before the Civil War. Founded about 1830 at a spring where Capt. London Daingerfield was killed by Indians. The square was laid off in 1841 when this was designated seat of justice for judicial county of Paschal. Courts continued to be held here, though Paschal was abolished in 1842. One noted 1842 trial was for a group that included Stephen Peters (one of the men who had platted the town square), accused of murdering Robert Potter. Potter, formerly secretary of the navy and one of the authors of the Constitution of the Republic of Texas, had been killed in the Regulator-Moderator Feud, a political power struggle in East Texas.

Marker Title: Site of Hussey & Logan's Mill and Gin Factory
Address: N. Coffey St.
City: Daingerfield
County: Morris
Year Marker Erected: 1965
Marker Location: next to cemetery
Marker Text: Made machinery to process most important crops in Texas: gin saws to take seeds from cotton, for cloth-making; grist mills to grind corn into meal for bread. During Civil War, when mills or parts could not be imported, gave vital aid to Texas in the handling of cotton-- the only cash crop, called "money of the Confederacy," as it was traded in Mexico to obtain ammunition, medicines and other goods. Other wartime plants in Texas made wagons, guns, powder, shoes, hospital supplies, kettles, pot, leather goods, clothes. One item was 1,712,328 yards of cloth.

Marker Title: Morris County
Address: US 67 E in roadside park
City: Naples
County: Morris
Year Marker Erected: 1964
Marker Location: US 67 E in roadside park
Marker Text: Created and organized in 1875, with Daingerfield as county seat. Named for William W. Morris (1805-1883), who came to Texas in 1849. When the Civil War began in 1861, was in 8th Legislature that armed the state, enacted soldiers' families' relief laws and set up 2,000 mile frontier and coastline defenses. Also in 13th Legislature, 1873-75. Of the 254 Texas counties, 42 bear Indian, French or Spanish names. 10 honor such colonizers as Stephen F. Austin, "Father of Texas". 12 were named for Washington, Clay and other American patriots. 96 were named for men who fought in the Texas War for Independence (15 dying at the Alamo), signed the Declaration of Independence from Mexico, or served as statesmen in the Republic of Texas. 23 have the manes of frontiersmen and pioneers. 11 honor American statesmen who worked for the annexation of Texas; 10, leaders in Texas since statehood, including jurists, ministers, educators, historians, statesmen; and 36, men like Morris prominent in the Confederacy during the Civil War. Delta and 8 others have geographical names. San Jacinto and Val Verde were named for battles; Live Oak and Orange, for trees; and Mason for a fort.

Marker Title: Hometown of United States Senator Morris Sheppard
City: Naples
County: Morris
Year Marker Erected: 1968
Marker Location: US 67 and Baker St.
Marker Text: (1875-1941) One of great lawmakers of the United States. Born near Naples, son of John L. and Alice Eddins Sheppard. Attended local schools. Received degrees of B. A. and LL.B., University of Texas; LL.M., Yale; LL.D., Southern Methodist University. Entered law practice in 1898. Served in United States Congress 1902-1913; United States Senate, 1913-1941. Active in legislation for agriculture, waterways, topographical and geological surveys, development of helium and potash deposits, construction and improvement of Federal buildings (including National Archives), Federal insurance for bank deposits, and Air Mail service. Author in Senate of Federal Credit Union Act, the Federal Maternity and Infancy Act, and the 19th (Prohibition) Amendment. He supported the 19th (Woman's Suffrage) Amendment. One of creators of World War I Aircraft Board, he continued to champion military aviation, even when air power was discredited during 1920s and 30s. His leadership prevented disastrous curtailment of air power, and helped prepare nation's air defenses in World War II. He was chairman, Senate Military Affairs Committee, 1933-1941. Sheppard Air Force Base, Wichita Falls, was named in his honor in 1942. He married Lucile Sanderson; they had 3 daughters.

Marker Title: Site of Old Spearman's Ferry
City: Lone Star
County: Morris
Year Marker Erected: 1966
Marker Location: US 259 about 1 mi. south of Lone Star
Marker Text: Operated along with a mill by E. B. Smith during the Republic of Texas. Bought by John Spearman in 1850. At this site in 1870 the state authorized a toll bridge. Fees ranged from 2 cents for a sheep to $1 for an 8-horse team and loaded wagon. This was at Big Cypress Bayou on Pittsburg-Jefferson Stage Road.

Marker Title: James Thompson
City: Daingerfield
County: Morris
Year Marker Erected: 1976
Marker Location: US 259/SH 49 in front of Morris County Courthouse
Marker Text: (1759-1841) Veteran of the American Revolution. Ancestors of James Thompson lived in Virginia in the 17th century. Thompson served in Capt. Bynum's Company of North Carolina Militia in 1781, helping win victory in the American Revolution. In pioneer spirit, he and his family later moved to Alabama, then to Mississippi, then to the Republic of Texas. Here in the new land, he was a revered patriarch. His son-in-law, John Peacock (1786-1848), fought in the 2D Regiment, North Carolina Militia, in the War of 1812. His health broken by the war, he went to Ittawamba County, Miss., where he received land in lieu of army pay. About 1840 he emigrated with his wife Zilpha (Thompson), four sons, two daughters, and his father-in-law to Paschal (Morris) County. Here he donated sites for a church, school, and cemetery. Thompson's grandson, Williams Peacock (1811-64), came to Texas in the 1830s, then returned to Mississippi and brought back his grandfather, parents, and other relatives. In 1841 President M. B. Lamar appointed him sheriff of Paschal (Morris) County. Later a member of the Texas Rangers, he was killed in an Indian fight. This family helped make Texas great. Thompson and many descendants rest in the Daingerfield Cemetery.

Marker Title: Wheatville and Wheatville Cemetery
City: Naples
County: Morris
Year Marker Erected: 1994
Marker Location: off SH 77 on CR 4315 about 2.5 mi. north of Naples
Marker Text: Wheatville, named for pioneer settler William Wheat, began as a rest stop/general store on a main road to Jefferson (40 mi. SE) in the 1840s. During the 1850s a cotton gin, grist mill, school, and church were established here. A post office was opened in 1868. The first recorded burial in the community cemetery was that of John S. Sheppard in 1863. The town declined in the 1880s as businesses and residents moved to the new railroad town of Naples (3 mi. S). Wheatville native Morris Sheppard (1875-1941) served as U.S. Senator from 1913-1941. The graveyard continues to serve the area. Incise on back: Glenda Brown Scarborough.