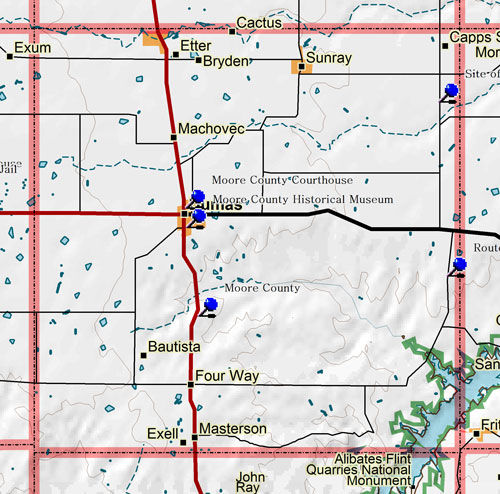 Marker Title: Exploration Route of Lt. James W. Abert
Address: FM 1913 and Plum Creek Rd.
City: Dumas
County: Moore
Year Marker Erected: 1976
Marker Location: From Dumas take SH 152 about 19.5 miles E to FM 1913. Take FM 1913 about 5.3 miles S to marker at intersection with Plum Creek Road.
Marker Text: The United States government had the Canadian River explored in 1845, just before Texas joined the Union. Topographical engineer James W. Abert (1820-1897), a West Point graduate, had charge of a 33-man party, and spent two or more days in the vicinity of this marker. Near here he was visited by Kiowa Indians, who said that they were at war with Texans. Abert was made welcome after he proved to be an American. His map of the river and notes on geography and the Indians proved valuable to Texas and the nation.

Marker Title: Site of Historic Drift Fence
Address: FM 1960 and SH 281
City: Dumas
County: Moore
Year Marker Erected: 1969
Marker Location: Located at FM 1960 6.2 miles S of intersection with SH 281, east side of road.
Marker Text: Until the mid-1880's, no range fences existed in the Texas Panhandle. Thus when winter blizzards came, cattle drifted from Oklahoma, Colorado and Kansas to the Texas ranches of ("Box T"--Dominion Cattle Co. Ltd.), K ("Seven K"--York, Parker & Draper), CC ("Bar C's"--Creswell Land & Cattle Co.), ("Turkey Tract"--Hansford Land & Cattle Co.), LX (Bates & Beal), LIT (Littlefield) and LE (Lee & Reynolds). The influx caused these ranches in the Canadian River breaks to be over grazed, for by spring roundup there were as many northern as local cattle in the herds. To prevent the costly and time-consuming job of separating the cattle, each Texas rancher agreed to construct a fence along his north boundary line. The resulting fence was 200 miles long and ran from the northeast corner of the Panhandle southwest to near the site where Dumas was later founded, then west about 35 miles into New Mexico. It was a 4-strand, 4-bars fence with posts 30 feet apart and a gate every 3 miles. The materials amounted to about 65 carloads of wire and posts hauled from Dodge City. In 1890, however, to comply with an 1889 state law prohibiting any fence from crossing or enclosing public property, most of the fence was removed.

Marker Title: Moore County
Address: US 87, about 7 mi. S of Dumas
City: Dumas
County: Moore
Year Marker Erected: 1936
Marker Location: Located 7.1 miles S of courthouse in Dumas on US 87 (W side of road).
Marker Text: Created 1876 from Bexar Land District. Named in honor of Edwin W. Moore (1810-1865), Commodore of the Navy, Republic of Texas. County was organized July 5, 1892, with Dumas (named for promoter of the townsite) as county seat. Stagecoach and freighters furnished transportation in early days. The county was thinly settled; ranching was the main industry, prior to discoveries of oil and gas in 1926. A zinc smelter was built in 1936. Economy is now based on petrochemicals, helium, oil, gas, cattle feeding, ranching, grains, soybeans, sugar beets and castor beans.

Marker Title: Moore County Courthouse
Address: 8th and Dumas St.
City: Dumas
County: Moore
Year Marker Erected: 1984
Marker Location: West side of courthouse square, 8th and Dumas Streets, Dumas.
Marker Text: Land for this courthouse square was donated by Louis Dumas, who laid out the townsite in 1891. One year later, Moore County was formally organized as a government, and in 1893 the county's first courthouse was built. The original courthouse was replaced by the current structure, built by C.S. Lambie and Company at a cost of $155,000. The brick building was occupied by county officials during the first week of August 1931. Both courthouses have held all county records and have served as focal points for the community and for the entire county.