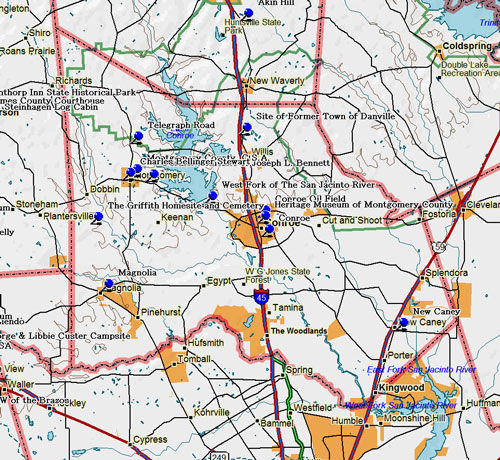 Marker Title: Former Homesite of Joseph L. Bennett
City: Montgomery
County: Montgomery
Year Marker Erected: 1995
Marker Location: SH 105, 1.5 mi. east of Montgomery (just east of Walden Rd.)
Marker Text: Joseph L. Bennett, who came to Texas in 1834 and settled in this area, joined the Texas army in early 1836. As captain of a company of local volunteers, he left this area about March 1, 1836, to lead his troops to aid Texan forces at the Alamo. Upon reaching the Colorado River he learned of the fall of the Alamo, and so discontinued the mission. He soon joined with Sam Houston's main army and in April was elected Lt. Colonel of the 2nd Regiment of Volunteers, the company he commanded at the Battle of San Jacinto. Bennett received land grants in payment for his military service, and in 1837 President Sam Houston appointed him to command a frontier defense unit. Elected by Montgomery County voters to the Republic of Texas Congress, he served for two terms, 1838-1840. He briefly resumed military service in 1842 as a member of the Somervell Expedition against Mexico. Bennett also was active in local civic affairs, serving as mail carrier from Houston to Montgomery, county commissioner and supporter of area schools. He moved his family to his headright land grant in present Navarro and Freestone counties in 1848. He died later that year and was buried in a family graveyard near Streetman.

Marker Title: Conroe Oil Field
Address: Four Corners, FM 3083
City: Conroe
County: Montgomery
Year Marker Erected: 1967
Marker Text: One of the great petroleum areas of the Texas coastal region. Opened Dec. 13, 1931, by the discovery well of George Strake (No. 1 South Texas Development Co.), about 1.4 miles west of here. Initial daily flow: 15,000,000 cubic feet of gas, along with white gasoline. Strake's second well, a 900-barrell-a-day producer, and the Heep Oil Corp. No. 1 Freeman (both coming in during June 1932) proved existence of a large field. Fast-paced drilling ensued. In Jan. 1933 Madeley No. 1, of Kansas Standard, came in as a wild well and on fire. TNT charges and tons of earth did not smother the fire; it burned about three months. Cratering spread to Harrison and Abercrombie well nearby, and that gushed out of control. In Jan. 1934 a driller for Humble "killed the blowout," by using directional drilling for first time in coastal Texas. This saved the field. (The crater is 600 feet deep.) The Conroe field was the first in Texas to adopt 20-acre spacing, before this was mandatory under conservation rules. It has yielded over 400,000,000 barrels of oil; now produces at the yearly rate of 5,300,000 barrels. After the dramatic discovery here, Montgomery County developed 11 other oil fields, and has vast reserves for continuing production.

Site of Former Town of Danville

Marker Title: Site of Former Town of Danville
City: Willis
County: Montgomery
Year Marker Erected: 1970
Marker Location: Shepard Hill Rd., north on 45 from Danville, 4 mi. from Willis.
Marker Text: Founded before 1840 as trade center, rich plantation area. Many prominent families had Texas beginnings here. At peak, town had 15 businesses, several churches, good schools; refusing right-of-way to Houston & Great Northern Railway in 1870s, lost its people and commerce to new town of Willis, on the railroad. Sheperd Hill Cemetery (at this site) is all that remains of the once-thriving town. Claim to enduring fame lies in memory of Jonathan Lindley, a Danville man who lost his life defending cause of Texas at the Alamo, March 6, 1836

Marker Title: The Griffith Homesite and Cemetery
Address: FM 1486
City: Dobbin
County: Montgomery
Year Marker Erected: 1980
Marker Location: 4 mi. south of Dobbin
Marker Text: Elias R. Wightman, a surveyor in Stephen F. Austin's first colony, returned to the United States in 1828 to recruit additional settlers. Two colonists who joined him in New York were his sister Esther (1788-1863) and her husband Noah Griffith (1786-1853). In the early part of 1829 they arrived at the Texas port of Matagorda, platted earlier by Wightman. As settlers of Austin's second colony, the Griffiths received a land grant at this site from the Mexican government. They moved here with their three sons in 1831 and built a log cabin on the property. Their oldest son, Leroy Alonzo (1821-1883), served in local government before moving to Salado in Bell County. There he helped organize the first Texas grange movement, an alliance of farmers, in 1873. Another son, Joshua Delos (1825-1887), buried here, operated one of the first sawmills in the area. The third son, John Maynard (b. 1828), married Angelina Elizabeth Dickinson, who was known as "the babe of the Alamo" because she and her mother Suzanna Dickinson had survived the 1836 battle. Noah and Esther Griffith were buried 20 feet from her in front of their homesite. The cemetery is used for the burial of family members and friends.

Marker Title: Magnolia
Address: FM 1488
City: Magnolia
County: Montgomery
Year Marker Erected: 1966
Marker Location: Magnolia Blvd. and Magnolia Pkwy.
Marker Text: In early days, known as Mink's Prairie, and by 1850, shortened to Mink. In 1902, railroad named it Melton to honor Jim Melton, a large landowner in the county, but U.S. Post Office confused it with town of Milton. Citizens renamed it Magnolia for the many magnolia trees beside nearby Mill Creek

Marker Title: Montgomery County, C.S.A.
Address: SH 149 in front of Community Building
City: Montgomery
County: Montgomery
Year Marker Erected: 1965
Marker Text: A wealthy farm area in 1861. In Civil War, supported Texas with goods, funds and men. 2 companies from here were in famed Hood's Texas Brigade-- with only 9 men in one living to return. Young boys, old men and the partially disabled formed 5 home guard and state companies. The county clothed its own soldiers. The Courthouse, then on this site, had a sewing room for that work; home looms, cotton cards and needles also cooperated. Homefolk ate sparingly, had few new clothes. By 1864, so much was given to war effort that not a store was open in Montgomery

Marker Title: New Caney
City: New Caney
County: Montgomery
Year Marker Erected: 1984
Marker Location: US 59 S Frontage Rd., in front of Courthouse Annex
Marker Text: Permanent settlement in what is now New Caney began in the 1860s. The area was first called Presswood for the pioneer family of Austin and Sarah (Waters) Presswood. The Presswoods came to Texas in 1862, purchased land in the area, and raised cattle on the open ranges. The family of John Wesley Robinson (1819-1903) also settled here in the 1860s and began farming, cattle raising, and cotton ginning operations. When the Houston, East and West Texas Railway line was laid through Montgomery County in the 1870s, the community became a shipping point for livestock. It then was known for many years as Caney Station, named for the dense cane brakes growing along nearby creeks. In 1882, when a post office was established, the name New Caney was adopted. Early industries in New Caney were confined chiefly to those that were necessary to carry on farming and cattle raising. As the timber industry began to flourish, however, mining props, used to support the earth along the side and roof of mining tunnels, were shipped out of New Caney. The settlement and early history of New Caney are important reminders of the rich heritage of this part of East Texas and Montgomery County.

Marker Title: West Fork of The San Jacinto River
City: Conroe
County: Montgomery
Year Marker Erected: 1975
Marker Location: SH 105, 7 mi. west of Conroe near Conroe Dam and Coast Guard Auxiliary.
Marker Text: Patiri and other Indians lived here in Archaic and Neo-American periods. When Spanish incursions began in the 1700s, the river was named either for hyacinths or for the saint on whose day it was discovered. Pioneers from the United States settled on the San Jacinto before Stephen F. Austin founded his colony to the west in 1821. Upon their wish to join him, he took this area into his colony in 1824. The San Jacinto won wold fame when beside its lower channel Mexican Dictator Santa Anna with 1700 troops was defeated on April 21, 1836, by General Sam Houston and Texas volunteers fighting for freedom. Riverside farms became plantations, often shipping cotton by keelboat down the San Jacinto, in 1845-61. Until woodlands vanished during the years 1880-1930, sandhill cranes and bear abounded. Reforestation, begun in 1936, brought back timber industries and small game. The lake now makes this a residential and recreational paradise, but covers such landmarks as Grandma Ed'Ards fishing hole, Indian Camp Creek, and the White Sugar Sand Crossing. Downriver, after this fork and the East Fork unite, the San Jacinto forms part of the Houston Ship Channel, the link between Port of Houston, the Gulf, and the high seas.

Marker Title: Charles Bellinger Stewart
City: Montgomery
County: Montgomery
Year Marker Erected: 1966
Marker Location: SH 149 in front of Community Building
Marker Text: (1806-1885) First Secretary of State in Texas (Nov. 1835 - Feb. 1836). Came to Texas 1830. Signed Declaration of Independence; helped to write Constitution of the Republic in 1836 and the state in 1845; served Montgomery County as district attorney and three terms as State Representative. Highest appointed official in Texas, keeper of the state seal, the secretary of state is named by the governor with advice and consent of the Senate. This office has attracted leaders. Stephen F. Austin, "Father of Texas," held the post in 1836. Secretary Ebenezer Allen in 1845 represented the Republic in annexation, reserving for Texas her public lands-- a prerogative allowed to no other state. The secretary of state grants charters; attests the commissions and proclamations of the governor; assists the governor in extradition proceedings; registers appointments of the governor to the many state boards; administers the uniform commercial code of Texas; appoints notaries; publishes the laws of Texas; administers election laws; issues ballots; canvasses returns; files reports of state agencies. Since Stewart, 83 other men and two women have served Texas as secretary of state.

Marker Title: Telegraph Road
City: Montgomery
County: Montgomery
Year Marker Erected: 1995
Marker Location: SH 149 (in Sam Houston National Forest), 6 mi. north of Montgomery.
Marker Text:A pioneer trail connecting the towns of Montgomery, Houston, and Huntsville, in use as early as 1845, became an important transportation and freighting route for early settlers. After the Texas and Red River Telegraph Company was established in 1854, wires were strung along the historic trail to extend service to Montgomery and Houston. The route soon became known as the "Telegraph Road." Although the wires eventually were removed, portions of the old Telegraph Road remained visible for many years.