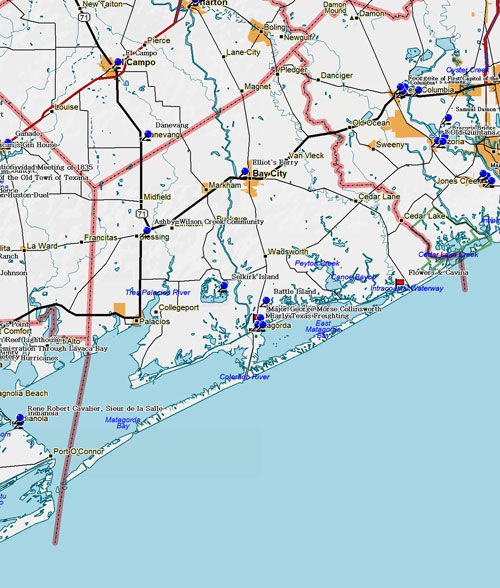 Marker Title: Ashby-Wilson Creek Community
Address: FM 1095 at CR 355
City: Blessing
County: Matagorda
Year Marker Erected: 2002
Marker Location: Blessing, ESE via SH 35 and FM 1095, at int. of FM 1095 and CR 355 (Ashby Cemetery Rd.)
Marker Text: Ashby-Wilson Creek Community William Erastus Moore, a New Jersey native, settled in Indianola in the 1850s. After serving with Terry's Texas Rangers in the Civil War, he returned to settle on land northeast of Blessing and named the surrounding agricultural community in honor of Col. Henry M. Ashby, a Tennessee field commander with whom he had served during the war. Moore operated a ranch in the community, as well as a general store that housed the post office where he served as postmaster from 1890 until 1902. He also freighted supplies by boat at a time when the Colorado raft (logjam) made area creeks, such as Wilson Creek, more navigable. An active member of the community, Moore donated land for the Ashby Methodist Church and the Ashby Cemetery. Concurrent to Ashby's development, a group of freed slaves established the nearby Wilson Creek Community. Residents there organized the Christ Chief St. Mary's Baptist Church and built a sanctuary where, as with the Methodist and Baptist churches in Ashby, local children also attended school. The combined Ashby-Wilson Creek Community showed economic promise in the early 20th century, with cotton gins, stores and warehouses, but the population gradually declined. When the raft was cleared and the Colorado River became navigable, Wilson Creek was no longer viable. Plans for a railroad connecting Wilson creek to the Colorado were abandoned. The resulting economic downturn, coupled with wartime population shifts to other towns in the 1940s, led to the now sparse habitation of the area. Still, descendants of early residents remain, as do the memories of the many men and women who made their lives here. (2002)

Marker Title: Elliott's Ferry
City: Bay City
County: Matagorda
Year Marker Erected: 1986
Marker Location: east side of Colorado River Bridge south of Bay City on SH 35; Bay City.
Marker Text: During the early days of Anglo-American colonization in Texas, the Matagorda Bay Prairie area was an important route for people traveling between settlements. A convenient river crossing was a necessity, and a ferry was established on the Thomas Cayce league of land near this site. Known as Cayce's Ferry, the site was garrisoned by a small army post. In January 1839 George Elliott (1806-1862) purchased land on the west bank of the Colorado River from Thomas Cayce, and from that time the ferry crossing was known as Elliott's Ferry. George Elliott was assisted in his endeavors by two nephews, William Elliott and John Elliott, who continued the ferry business after George Elliott's death. By 1863 a small settlement had grown up around Elliott's Ferry. A small mercantile business and a post office known as Elliott's Ferry, Texas, were in operation in 1872. In 1893 the post office name was changed to Elliott, Texas, and a year later was moved to Bay City. In 1902 a bridge was built over the Colorado River two miles northwest of Bay City. Known as the "Old River Bridge", its completion resulted in the demise of Elliott's Ferry. Texas Sesquicentennial 1836-1986

Marker Title: Selkirk Island
County: Matagorda
Year Marker Erected: 1974
Marker Location: from Matagorda go northwest on SH 60 approximately 5 miles, than west on (River Road) also known as Zipprian Road approximately 3 miles to intersection of Selkirk Drive and Zipprian Way.
Marker Text: William Selkirk (1792-1830), one of Stephen F. Austin's original "Old three hundred" settlers, came to Texas from New York in 1822. Selkirk was a surveyor for the Austin colony and served in the colonial Militia. He was part of a group sent (1824) by Austin to make a treaty with the Waco and Tawakoni Indians. His grant of land, known as Selkirk Island, was among the first issued by the Mexican government to American colonists in 1824. Ownership of the property has remained in his family since that time. Selkirk's descendants have been prominent civic and business leaders in Matagorda and Galveston counties. Originally Selkirk's land grant consisted of several islands formed by the branches and channels of the Colorado River. When the grant was surveyed in 1824, a log raft (fallen trees) blocked the river near Selkirk's property. This raft hindered navigation inland for many years. Recent dredging closed the channels so that the land is no longer divided into islands. In the 19th century a sawmill stood where Mill Creek once emptied into the now dry east bed of the Colorado River. According to legend, one of jean Lafitte's Pirates hid a treasure at the northern end of Selkirk Island.

Marker Title: Early Texas Freighting
County: Matagorda
Year Marker Erected: 1967
Marker Location: corner of Asher and Laurel; Matagorda.
Marker Text: Industry that moved goods to build, sustain distant settlements in 18th-19th century Texas. Teamsters defied Indians, bandits, and Texas weather to supply outlying forts and inland towns, which suffered if imports from the Gulf Coast, U.S., or Mexico slackened. One of few regular runs was Austin-Matagorda. Wagons left each city on 1st and 15th of every month, crossing Matagorda, Wharton, Colorado, Fayette, Bastrop, and Travis counties. Houston was major Texas freight center because of access to Galveston Bay. George T. Howard and Charles Ogden were early freight men. First carts, later wagons with 3000-7000 lbs. of cargo were drawn by 3 to 6 yoke of oxen or mule teams. "Grass rates" for faster mules. Early wooden carts were 15 ft. long with two 7-ft. wheels and a thatched roof. Their hubs were greased with prickly- pear leaves. For heavy loads, rough roads, the 2-ton "Prairie Schooner" was best. Caravans varied from 5 to 150 wagons. When resting or attacked, wagons formed a round, protective corral, and trained mules took their places instantly. Teamsters often banded together for mutual assistance. With coming of the "Iron horse" in 1853, the freighter began slowly to disappear from the state.

Cavina raised sixty of Austin's settlers, and command was given to Captain Buckner. At the site of present Matagorda on the Colorado River, Buckner's men fought a heated battle with the raiding Indians. Among his volunteers who narrowly escaped death in this battle was Moses Morrison, who had been the organizer of what was arguably the earliest Texas Rangers. In the ensuing massacre, the vengeful Texans killed Indian men and women. As many as forty or fifty Indians were killed and the riverbanks literally ran red with blood.

The homes of Charles Cavina, who had immigrated to Texas in 1828 and received a league in Matagorda County, and neighbor Elisha Flowers were attacked by an estimated seventy Karankawa Indians in 1830 near Live Oak Bayou on Old Caney Creek in Austin's Colony. Four women in the Cavina house were killed, as was Mrs. Flowers. Two badly wounded girls survived the assault.