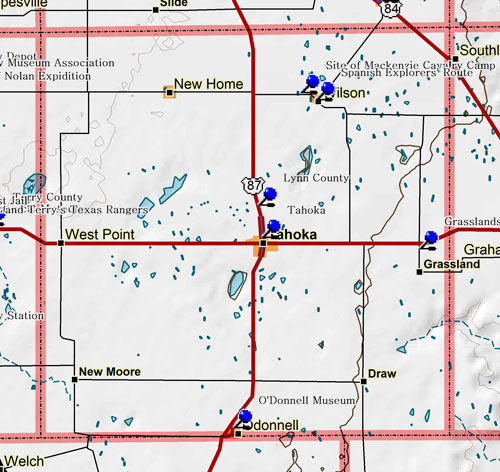 Marker Title: Grasslands
Address: 2 mi. N on FM 212
City: Grasslands
County: Lynn
Year Marker Erected: 1970
Marker Location: From Tahoka, take U.S. 380 E to Junction of U.S 380 and FM 212. OR 2 mi. N of Grasslands Community on FM 212
Marker Text: One of first land patents in South Plains, lying along a well-marked Indian trail used by explorers, U.S. Army, and (after 1880) the stages and freighters northbound from Colorado City. Grasslands Ranch (named for an estate of President Cleveland) was established 1888 by Enos L. Seeds, the 1889-1900 postmaster, who erected a fine frame house and first trading post on South Plains. Mrs. Seeds was the first permanent white woman resident in county. Nearby is grave of area's first-born white child (a son of Mr. and Mrs. Todd Wilson). Community name is now Grassland. (1970)

Marker Title: Site of Mackenzie Cavalry Camp
Address: SH 211, west city limits in roadside park
City: Wilson
County: Lynn
Year Marker Erected: 1967
Marker Location: SH 211, west limit of Wilson in Roadside Park
Marker Text: At or near this spot, Colonel Ranald S. Mackenzie, with two companies of United States 4th Cavalry, was overtaken on Dec. 4, 1874, by a snowstorm. Forced to spend the night here without wood or water, or grass for the horses, troops called this the most miserable night of their duty in the Southwest. Several horses froze to death. MacKenzie was hunting here for straggling Indians, during last weeks of 1874 campaign to confine tribes to reservations. On Dec. 5 his troops reached Tahoka Lake, where they found shelter under a cliff. (1967)

Marker Title: Tahoka
Address: 1612 Lockwood
City: Tahoka
County: Lynn
Year Marker Erected: 1974
Marker Location: 1612 Lockwood, Tahoka
Marker Text: In Dec. 1902, over 100 people met around a bonfire in a ravine to the southwest of Tahoka Lake and voted to petition for county organization and to select a townsite for a county seat to be named "Tahoka," an Indian word meaning "fresh water," Early in 1903, B.G. Sweet, Jack Alley, and W.T. "Bill" Petty organized the Tahoka Townsite Company. Sweet surveyed and platted the town, and he and L.E. King established the first mercantile store opposite the southwest corner of the public square. County elections were held on April 7, 1903, and the Tahoka Post Office opened on April 30, with Fannie N. Henderson as postmaster. Tahoka soon boasted a 2-story frame courthouse, school, two churches, a hotel, and several businesses, including a newspaper, "The Lynn County News," first published on Oct. 9, 1903, by Otis and Inez Lilly. In 1906, a bank and a cotton gin were built. The Santa Fe Railroad was extended from Slaton to Tahoka in 1910, and for several years Tahoka was one of the largest cattle shipping points in the nation. The community was incorporated on June 13, 1915, and J.E. Stokes elected mayor. Tahoka serves as a trade center for Lynn County farmers and ranchers. (1974)