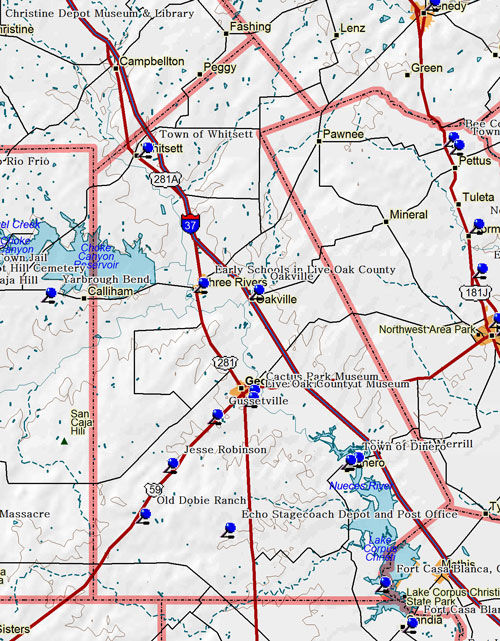 Marker Title: Echo Stagecoach Depot and Post Office
Address: On FM 888 about 17 mi. SE of George West
City: George West
County: Live Oak
Year Marker Erected: 1979
Marker Location: on Private Property. From George West, take US 59 about 5 miles east to I-37 take I-37 south about 15 miles to FM 888, take FM 888 west 1.2 miles cross railroad tracks, turn north on CR 357 drive 1.4 miles to unmarked road hoad west 0.1 mile to Mt. Echo Ranch.
Marker Text: Known as "Mount Echo" or "The Point", this site once belonged to Empresario James McGloin. His daughter and son-in-law, Elizabeth and Patrick Murphy, ran a general store at Echo. John Bernard Murphy (1822?-1884) and his wife Margaret Mary (Healy) (1833-1907), both born in Ireland, settled here in the 1850's and built a two story ranch house. J.B. Murphy, who was not related to Patrick Murphy, was later mayor of Corpus Christi. A one-story building near the J.B. Murphy ranch house served as a station for stagecoach lines from San Antonio to Corpus Christi and south Texas. It housed the Echo Post Office from 1858 until 1879. The stage road through echo was a dry weather route along the East Bank of the Nueces River. A higher caliche road that was passable in wet seasons served stage stops on the west side of the river. Until the arrival of the railroad in this area, the echo depot and post office provided a vital link with the outside world. In the 1880's, Margaret Mary Murphy moved to San Antonio and founded the Sisters of the Holy Ghost. She used the ranch as a retreat for nuns and converted the echo depot into a chapel. R.F. Sellers bought the property in 1906 and used the building for storage. It was demolished by hurricane Celia in 1970.

Marker Title: Gussettville
Address: FM 799, off US 59, 5 mi Se of George West
City: Gussettville
County: Live Oak
Year Marker Erected: 1967
Marker Location: From George West take US 59 east about 2.5 miles turn south on FM 799 and continue about 3 miles to cemetery.
Marker Text: Founded by Irish Catholics of McMullen and McGloin colony in 1830's. Called "Fox nation" for the Fox family, was renamed Gussettville in 1850's in honor of N. Gussett, owner of general store. First Catholic church in Live Oak County built here 1874. Land for church and part of the cemetery was given by Thomas Shannon and his wife Anne. A stagecoach stop on San Antonio-Brownsville line, town prospered until by-passed by railroad. Typical of hundreds of early towns that faded as train service diverted traffic. Church is chief remaining structure.

Marker Title: Crossing of Old Ox-Cart Roads
Address: US 281, 4 mi. N. of George West
City: George West
County: Live Oak
Year Marker Erected: 1968
Marker Location: from George West take US 281 about 4 miles north to marker on east side of highway.
Marker Text: From the early days of Spanish colonial Texas well into statehood, the only "Highways" in the area were primitive dirt roads. Although many had names, others were simply called "ox-cart roads" for the sturdy mexican carts so frequently seen on them. In the 19th century this site was a junction for two of these roads, one extending from Brownsville to San Antonio, the other from Laredo to Goliad, then over to Indianola on the Gulf Coast. This strategic location helped Oakville grow into a thriving town and become county seat of Live Oak County in 1856. Ox-carts were unique in being constructed entirely of wood, fastened by wooden pins and rawhide thongs. The two wheels stood taller than a man and the bed was usually 15 feet long, covered by a thatched roof. To stop the deafening squeak of the wheels, drivers greased the hubs with prickly pear leaves. Pulled by several yoke of oxen, the carts usually traveled in groups. Their arrival meant fresh coffee, beans, salt, and sugar for isolated settlers. Although gradually replaced by wagons, carts were for two centuries almost the only freight vehicles in Texas. Reminders of their former importance long remained in the names of these two old roads.

Webmaster note: Randy Robison has documented Latham Cemetery and has graciously provided us with a link.