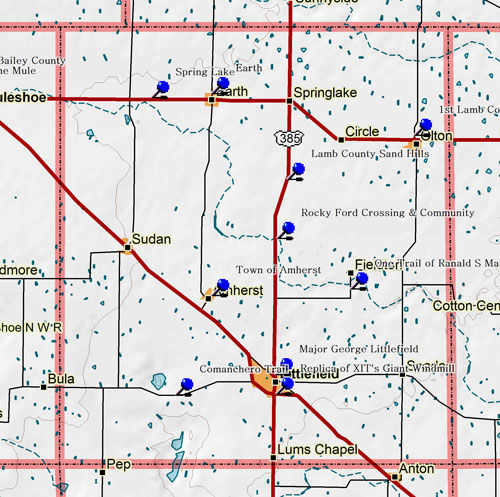 Marker Title: Town of Amherst
Address: FM 37
City: Amherst
County: Lamb
Year Marker Erected: 1972
Marker Location: located on FM 37 in Amherst (next to city hall)
Marker Text: Began in 1913 as a cattle-shipping point on Pecos and Northern Texas Railroad. Served the 300,000-acre Spring Lake Ranch, which was established in 1902 by W.E. "Colonel Bill" Halsell (1850-1934) and his son Ewing Halsell (1877-1965). According to local tradition the shipping point was named for Amherst College, Mass., alma mater of one of the railway officials. When, in 1923, the economy of the High Plains began to switch from ranching to farming, the Halsells divided much of their land to sell to the influx of new settlers. Farms could be bought for $25 an acre. They set aside land at the railroad depot for a town and donated lots for a school and churches. First permanent building was the Amherst Hotel, built by Halsell Land Company for prospective buyers and visitors. It also had space for a bank, general store, and office. For years it was the most popular hotel between Clovis, NM and Lubbock, TX. The first general store was opened in 1923, a post office in 1924, and the First National Bank in 1925. The town's first newspaper was the "Argus". By 1930 Amherst had a population of 964. Today (1972) citizens number 835 and the economy is based on cotton and grain, hog raising and cattle feeding. (1972)

Marker Title: Earth
Address: US 70
City: Earth
County: Lamb
Year Marker Erected: 1973
Marker Location: located on US 70, 2 blocks east of traffic light (south side of road) in Earth.
Marker Text: Before white men entered this region in late 19th century, nomadic Apache, Comanche, and Kiowa Indians followed the buffalo from water hole to water hole. A favorite Indian camp was at a spring (5 miles west), near which the Springlake headquarters of the XIT Ranch were located in the 1890s. William Electious Halsell (1850-1934) purchased Springlake Division in 1901. Halsell and his son, Ewing Halsell (1877-1965), established the 300,00-acre Mashed O Ranch in 1902. When the economic base of the High Plains began to shift from ranching to farming, and other large ranches were being sold for the plow, the Halsells, in 1923, offered a portion of their land for sale to new settlers. Sale of fertile rangelands attracted many farmers from the midwest, where land prices were soaring. The Halsell family selected this site for a new settlement in August 1924, built a hotel, cotton gin, and school, and named it, "Fairlawn". When the post office opened in 1925, the names "Fairlawn" and "Tulsa" were rejected, and "Earth" chosen. Marshall Kelley was appointed first postmaster. Earth soon had several churches and business enterprises. Earth was incorporated in 1946, and continues to... (1973)

One of the Trails of Ranald S. MacKenzie

Marker Title: One of the Trails of Ranald S. MacKenzie
Address: FM 1072, 0.5 mi. South
City: Fieldton
County: Lamb
Year Marker Erected: 1977
Marker Location: from Fieldton, take FM 1072 south, about .5 miles
Marker Text: Colonel Ranald S. Mackenzie (1840-89) of the United States Army was ordered in the 1870s to conquer Indians of Texas frontiers. He led 240 enlisted men and eight officers in an expedition along the draw here. Heading toward New Mexico, he hoped to break up a ring of traders paying Indians to steal cattle and horses. He marched past this point about August 1, 1872, in a swift, secret move against the traders. The path beaten out by his men was serviceable later to scouts and settlers. Its traces are still known as Mackenzie's Trail. (1977)

Marker Title: Rocky Ford Crossing and Community
Address: US 385
City: Littlefield
County: Lamb
Year Marker Erected: 1976
Marker Location: from Littlefield, take US 385, about 12 miles north to Rocky Ford site.
Marker Text: The 840-mile Brazos River was both friend and foe to settlers. Here, near the source of Double Mountain Fork, after XIT Ranch was sold to smaller operators about 1912, the river that had attracted settlers was found to obstruct wet-weather travel. In 1926, the settlers built a gyp-rock road across the valley and lined the river bed with rock, to make a passable road. They also built a tabernacle for church, elections, and other gatherings. New roads bypass Rocky Ford, yet the community still thrives. (1976)

Marker Title: Lamb County Sand Hills
Address: US 385, 6.2 miles South
City: Springlake
County: Lamb
Year Marker Erected: 1979
Marker Location: from Springlake take US 385 south, about 6.2 miles to marker.
Marker Text: A natural landmark, this chain of sand dunes extends for 130 miles and is three to five miles wide. Archeological findings show that the area was inhabited 6,000 years ago. Comanches camped in the sand hills because of wild game, vegetation, protection from the wind, and the availability of water. Spanish explorers and later Anglo-Americans used the old Indian trails that passed along the dunes. Early ranching did little damage to the area. However, in recent years, the sand hills have been destroyed by extensive farming and industrial operations. (1979)

Marker Title: Replica of XIT's Giant Windmill
Address: US 84 at Delano St.
City: Littlefield
County: Lamb
Year Marker Erected: 1970
Marker Location: on US 84 at intersection with Delano Street, Littlefield.
Marker Text: Yellowhouse division of 3,050,000-acre XIT Ranch built (1887) a 132-foot windmill southwest of here. Set in a canyon, it had to be tall to catch breezes and pump water. It was known as the world's tallest windmill until it was toppled by winds in 1926. This replica was erected May 27, 1969. (1970)