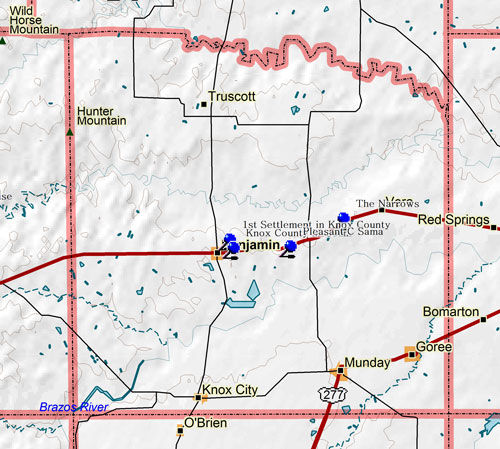 Marker Title: First Settlement in Knox County
City: Benjamin
County: Knox
Year Marker Erected: 1967
Marker Location: Courthouse Square, Highway 82, Benjamin
Marker Text: One side: In the immediate area of the L Bar Ranch were 12 families, most of them stockholders in the Wichita & Brazos Cattle Company. To assure them church and school privileges, in 1885 H.G. Bedford started the town of Benjamin, located 6 miles west of The Narrows, naming it for his eldest son. In 1886 he was instrumental in getting Knox County organized with Benjamin as county seat. FOUNDERS of BENJAMIN H. G. Bedford, Rufus Browder, G.B. Stewart, L.W. Ricketts, R.P. Dimmett, W.W. Wetherly, T.G. Stewart, Ed W. Bedford, J.W. Hinton, A.E. Brannin, R.D. Goree, H.C. Thompson. Other side L - RANCH; HILORY GREEN BEDFORD In 1884, Hilory G. Bedford formed Wichita & Brazos Stock Company to own and operate the L Bar Ranch. Retaining 51% stock, he became president with R.P. Dimmitt secretary. This company had a herd of some 8,000 cattle, grazing on the open range, centered north to south at The Narrows, between Wichita & Brazos rivers, branding S on neck and L - on left side. Headquarters of ranch were 4 miles northeast of The Narrows on north bank S. Wichita River, about center of present John Ed Jones ranch. 1886-1887 loss of many cattle by severe drouth and blizzards and sharp drop in prices caused dissolution of W&B Stock Company and disposal of ranch in 1887. Erected by some descendants of first settlers in tribute to settlers and their leader, H.G. Bedford. - 1967

Marker Title: The Narrows
City: Benjamin
County: Knox
Year Marker Erected: 1965
Marker Location: from Benjamin, take Highway 82 east, about 6 miles to roadside park.
Marker Text: This crest separates the drainage basins of the Wichita River, whose waters flow into the Mississippi, and the Brazos River, which winds through Texas to the Gulf of Mexico. Known as good hunting grounds because of buffalo grass, fresh springs and herds of mustangs from which to get mounts, The Narrows were crossed by the Comanche, Wichita, Kiowa, Apache, Seminole and Tonkawa Indians. Evidences of battles and camps are still being found. Later, settlers used the well-worn paths. Today its canyons and ravines are used for ranching. (1965)

Marker Title: Texas Business Pioneer Pleasant C. Sams
Address: 3.5 mi E. of Benjamin on US 82
City: Benjamin
County: Knox
Year Marker Erected: 1965
Marker Location: 3.5 mi E of Benjamin on US 82
Marker Text: In 1850's came to Texas from Arkansas. At 16, on outbreak of Civil War, was left in charge of family mills, instructed by his father to give entire flour output to widows of Confederates. In 1862, captured in Missouri, as he went through enemy lines to get his bride; "escaped" from Federal who also admired bride. Wedding trip was horseback ride to Texas. He served 1864-65 in Confederate frontier regiment. Pioneer cattlemen; business and financial leader. Founder and president, Benjamin Commercial Company. President and director, First National Bank, Benjamin.