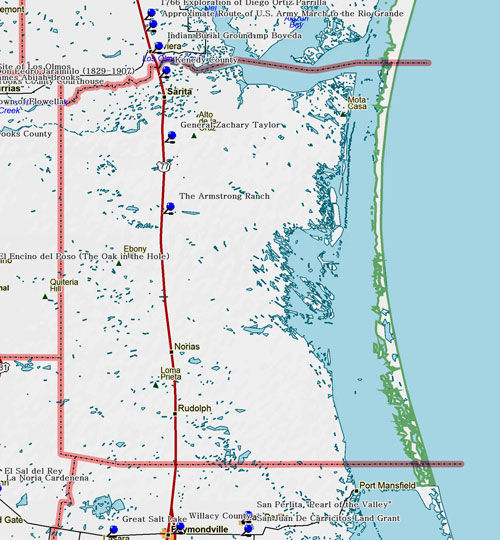 Marker Title: The Armstrong Ranch
City: Sarita
County: Kenedy
Year Marker Erected: 1983
Marker Location: from Sarita, take US 77 S about 20 miles (private - no access).
Marker Text: In 1852 James H. Durst, son of a leading Nacogdoches, Texas family, purchased 93,219 acres of land here, part of the "La Barreta" Spanish Land Grant. In 1878 Mary Helena "Mollie" Durst, married the noted Texas Ranger John Barkley Armstrong. Armstrong had served with Captain Leander McNelly and played a major role in bringing law and order to South Texas. He participated in the arrest of King Fisher and gained national fame for his capture of the notorious Texas outlaw John Wesley Hardin. Armstrong moved his family to the ranch home he built here. Their close friends and neighbors were the families of Captain Richard King and Captain Mifflin Kenedy. The ranch was an important site in the area; General Zachary Taylor had camped here prior to the Mexican War and for many years the ranch served as a stop on the stage route between Corpus Christi and Brownsville. Under Armstrong's guidance, the Armstrong Ranch became one of the legendary cattle ranches of Texas. His descendants have continued the tradition of family enterprise here through the twentieth century.