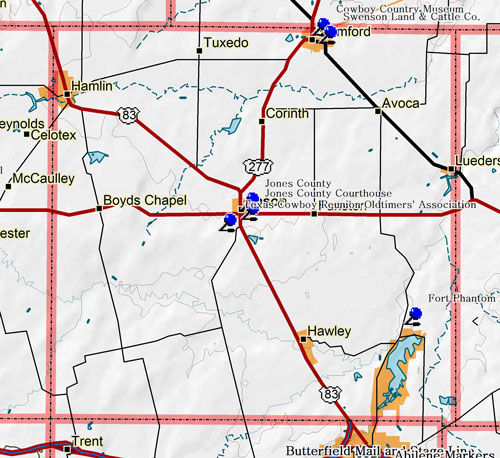 Marker Title: Fort Phantom Hill
City: Anson vicinity
County: Jones
Year Marker Erected: 1936
Marker Location: from Anson, take US 180 east about 10 miles to FM 600, then take FM 600 south about 8.5 miles to fort ruins
Marker Text: Established November 14, 1851, as unit in chain of forts from Red River to Rio Grande, to defend frontier settlers and west-bound 49ers. Officially "Post on Clear Fork of the Brazos", everyday name became "Phantom Hill," either from prevalent mirages or sighting of ghostly Indian in moonlight. Abandoned by U.S. Army on April 6, 1854, fort served in 1858-61 as stage stand for Southern Overland Mail. In 1871-72, the army again used this as a sub-post of Fort Griffin, 40 miles northeast. The adjacent village was temporary county seat when Jones County was organized in 1881. Erected by the State of Texas, 1971.

Marker Title: Jones County Courthouse
City: Anson
County: Jones
Year Marker Erected: 2000
Marker Location: 11th St. and Commercial (US 277/83), Anson
Marker Text: The Seventh Texas Legislature created Jones County in 1858 and named it for Anson Jones, the last president of the Republic of Texas. The Civil War, Reconstruction, and the area's untamed wilderness combined to postpone the county's formal organization until 1881. Voters selected Jones City, later renamed Anson, as permanent county seat. The first permanent courthouse was a small frame building, which served until the county purchased a hotel in 1884 for use as a courthouse. An 1886 brick courthouse served the county for the next 24 years. In late 1909, the Jones County commissioners court, led by County Judge J.R. Stinson, determined that the growth of the county called for a larger courthouse. They selected Elmer G. Withers of Stamford (15 mi. N) and the Texas Building Company of Fort Worth as architect and contractor, respectively. Completed in 1910, the Jones County courthouse is an excellent example of Beaux Arts styling, with influences from the Arts and Crafts movement found in the decorative painting uncovered during a 1990s rehabilitation on the ceiling of the district courtroom. Other notable features include the statue of Lady Justice atop the domed clock tower and the pedimented porticoes with flanking pairs of Ionic columns on each façade. Constructed of brick and Pecos red sandstone, the Jones County courthouse continues to stand as an important part of Anson's architectural heritage and a center of politics and government for the citizens of the county. Recorded Texas Historic Landmark - 2000

Marker Title: Swenson Land and Cattle Company Headquarters
Address: 210 E. McHarg St.
City: Stamford
County: Jones
Year Marker Erected: 1995
Marker Text: Businessman Swen (Svante) Magnus Swenson (1816-1896), first Swedish settler in Texas, is closely associated with Sam Houston and his effort to keep Texas in the Union prior to the Civil War. In 1854 Swenson purchased large land tracts here which he greatly expanded by the mid-1880s with school tracts and railroad scrips. A a result of new state taxes on land Swenson leased his West Texas land to his sons Eric Pierson and Swen Albin in 1882. Eric and Swen formed the Swenson Brothers partnership and by 1885 their ranching operations consisted of 1800 shorthorn and 180 Indiana pure crossbred Hereford-shorthorn cows bearing a distinctive reversed (SMS) cattle brand still in use today. Initially comprised of the Flat Top, Ericksdahl, and Throckmorton ranches, the Swenson family holdings were expanded to include the Tongue River Ranch in 1900 and the Spur Ranch in 1906, making it one of the largest ranches in Texas with over 500,000 acres. Swenson Land & Cattle Company, incorporated in 1926, established its headquarters here in 1927. It is noted for its introduction of an innovative mail-order system for selling cattle, brush management programs, and integrated ranching operations. The ranch was divided into four separate family-owned corporations in 1978. Sesquicentennial of Texas Statehood 1845-1995.