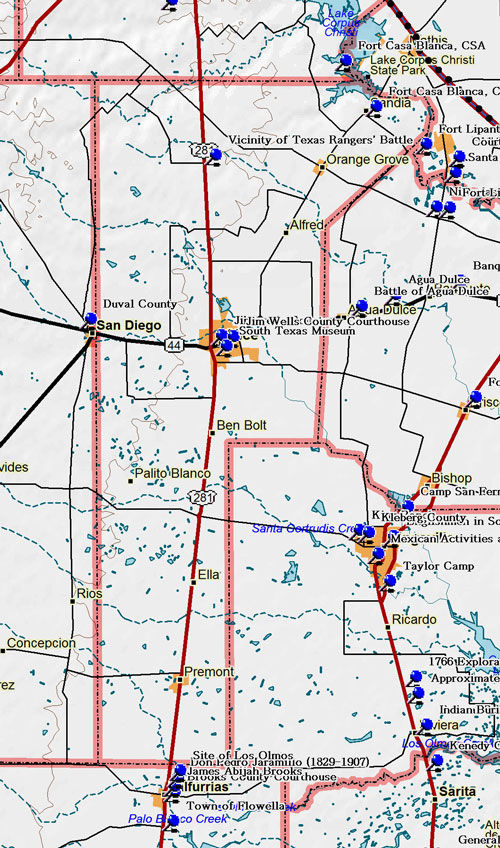 Marker Title: Alice
City: Alice
County: Jim Wells
Year Marker Erected: 1988
Marker Location: 401 East 2nd Street, Alice
Marker Text: In the 1880s, when the lines of the Corpus Christi, San Diego, and Rio Grande and the San Antonio and Aransas Pass railroads intersected, a new townsite was platted at the junction in what was then Nueces County. First called Bandana and then Kleberg, the town was finally named Alice (for Alice King Kleberg) when a post office was granted in 1888. Homes, business, schools, in south Texas were headquartered in Alice. P.A. Presnall was elected the first mayor in 1904. Alice became the county seat of newly created Jim Wells County in 1911. (1988)

Marker Title: Fort Casa Blanca, C.S.A.
City: Sandia
County: Jim Wells
Year Marker Erected: 1965
Marker Location: SH 359 at CR 364, Sandia
Marker Text: First building erected in area that is now Jim Wells County early as 1855. During the Civil War was on Confederate supply line that started in Corpus Christi, followed the Nueces here, went to Laredo, to Brownsville and back to Corpus Christi. When Federals were in Corpus Christi, Thomas Wright, the sutler, drove from here to other points. Casa Blanca was supplied by small boats that out-maneuvered Federals on Nueces Bay, slipped into the Nueces River, and came up Penitos Creek. They hauled guns, ammunition, medicine, and other wartime goods and took out cotton, "Currency of the Confederate." The fort had walls 28" thick, an escape tunnel from its well led to the creek. It's one entryway, wide enough for a 2-wheel cart or 2 horses abreast, was closed with a heavy cypress door. Cypress shutters covered its few small windows. Corner parapets and portholes at 3 heights gave it emplacements for defense. It not only warehoused goods, but also provided shelter and water for drivers passing with wagons along the Cotton Road from San Antonio to Matamoros. For cotton wagons it meant safety from bandit chases and from killing thirsts. In the 20th century the fort has disappeared.

Marker Title: Jim Wells County Courthouse
City: Alice
County: Jim Wells
Year Marker Erected: 1992
Marker Location: 200 Nort Almond Street, Alice
Marker Text: Governor Oscar B. Colquitt signed legislation creating Jim Wells County on March 11, 1911. Taken from territory formerly a part of Nueces County, the new county was named for prominent Brownsville attorney and business leader James B. Wells, Jr. (1850-1923). The first county elections were held two months later, and in January 1912 the citizens of the new county approved a bond election to finance the construction of a courthouse and jail. The county commissioners hired San Antonio architect Atlee B. Ayers to design the courthouse. The laying of the cornerstone on July 25, 1912, drew a crowd of more than 2,000 people. Celebration activities included performances by the Alice Concert Band and the Alice Symphony Club, as well as a barbecue, rodeo events, and baseball game. The discovery of oil in Jim Wells County in 1938 led to increased economic development and a population boom. The courthouse was remodeled in 1948-1949, and annexes later were built nearby. Although its original appearance has been altered, the Jim Wells County Courthouse stands as a significant structure in the county's history. It continues to serve as the center of county government.

Marker Title: Vicinity of Texas Rangers' Battle of May 29, 1850
City: Alice
County: Jim Wells
Year Marker Erected: 1969
Marker Location: from Alice, take Highway 281 north about 14.4 miles.
Marker Text: A gallant fight in era after Mexican war, while the Federals and Texans were ridding Nueces to Rio Grande area of marauders. Texas Rangers under Capt. John S. "Rip" Ford surprised a camp of Comanches near this site on May 29, 1850. In numbers, Rangers and Indians were about equal. Seven comanches were wounded, four slain; one Ranger was killed and two were wounded. Comanche Chief Otto Cuero was wounded by Capt. Ford and slain by a bullet from the gun of Ranger David Steele, who sent chief's regalia to Governor P.H. Bell, an ex-Texas Ranger.