We received the following e-mail from a visitor of our site: I just stumbled across your website and was enjoying the historical markers for the county that I grew up in. I was just curious though... is this all the historical sites or were they edited down? I remember several from my childhood that were not mentioned. Thanks, James Henson

Hi James, yes, we did edit down as we were trying to list only markers related to Frontier America, however, I have added one of the markers that you asked about. Also, since you mentioned you were having trouble remembering the other markers, I wanted to give you the link to the Texas Historical Commission where you can look up any Texas historical marker by name or by county. Happy searching! Lea Ann Rector ~ Fort Tours

Marker Title: Davis Cemetery
City: Jasper
County: Jasper
Year Marker Erected: 1992
Marker Location: take US 96 S 11 mi. to Beulah Springs Rd., then E 2.6 mi., left on dirt road and left again to Beulah Springs Community Center and Davis Cemetery.
Marker Text: This cemetery was established within the original 1280-acre land grant conveyed to Elizabeth Davis in 1841. Elizabeth, believed to be of Indian heritage, brought her family of three children, James R., Malinda C., and Martha, from Georgia and settled in this area of Jasper County in 1836. Although local tradition claims that a sick Indian child taken in by Elizabeth Davis is the first person buried here, the earliest marked gravesite is that of elizabeth Davis Kelly (1808-1873). Initially used exclusively for family members, the Davis Cemetery became the burial site for other members of the community following the introduction of sawmill and logging operations into the area prior to 1900. The cemetery was legally set aside within an 80-acre deed transferred from Elizabeth Davis' son, James R., to his daughter Elizabeth Morgan in 1906. The North Antioch Primitive Baptist Church structure was later erected on the cemetery grounds. Still active as a community graveyard, the Davis Cemetery contains more than 370 marked graves, including interments of citizens of the Republic of Texas and veterans of the American Civil War. 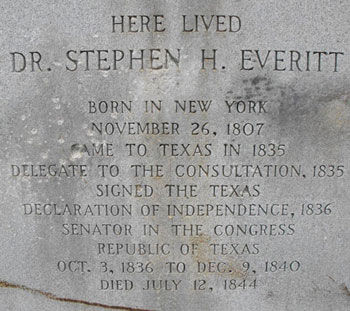 Marker Title: Jasper County Courthouse
Address: Main and Houston St.
City: Jasper
County: Jasper
Year Marker Erected: 1988
Marker Location: Courthouse Square
Marker Text: Jasper County was one of the original twenty-three counties created when the Republic of Texas was established in 1836 following the Texas Revolution. Bevil settlement, established by pioneer John Bevil about 1824, became the seat of government and was renamed Jasper in 1835 in honor of American Revolutionary War hero William Jasper. The first county courthouse on this site, a two-room log structure, was destroyed by fire in 1849. It was replaced by a two-story building, completed about 1854. The present courthouse, constructed of locally made red brick, was completed in 1889. One year later a tower with a four-sided clock and bell was added. Additional wings were built onto the east and west sides of the structure in 1931, and the entire courthouse was covered with stucco. An adjacent office building was erected by the Works Progress Administration (WPA) in 1940, and the courthouse clock tower was removed in a 1957 remodeling project. The Courthouse Square, with its official buildings and landscaped grounds, continues to be a focal point of Jasper County activities.

Marker Title: Site of Former Settlement of Richardson's Bluff
City: Evadale
County: Jasper
Year Marker Erected: 1972
Marker Location: FM 105 and CR 866 on E side of FM 105, Evadale
Marker Text: Homesite of Benjamin Richardson (1775?-1848?), an 1830 de Zavala colony settler. With his sons, Richardson operated a ferry that was of great service, especially in 1836 Runaway Scrape, aiding civilians as they fled toward the U.S. in fear of Santa Anna. Place later was renamed Ford's Bluff, for family with millsite here in 1852. In 1894 Mannie Cox opened a local shingle mill that was sold in 1902 to Kirby Lumber Company. When Kirby built sawmill in 1904, the site was renamed in honor of Miss Eva Dale, a teacher at the Southeast Texas Male and Female College in Jasper.

Marker Title: Stephen Williams
City: Jasper
County: Jasper
Year Marker Erected: 1991
Marker Location: US 96 and Brewsters Rd., 1 mi. N of Zion Hill
Marker Text: (May 9, 1760- ca. 1839) was born in 1760 in North Carolina. In 1778, he enlisted in the first of what would be many times in the armed forces. Enlisting three times in the Revolutionary War army, Williams fought in battles including Briar Creek, Camden, and Eutaw Springs. Following the Revolutionary War, he moved to St. Helena parish, Louisiana. When the War of 1812 broke out, he volunteered for service and at age fifty-two served as a sentry. About 1830, shortly after the death of his wife, Williams relocated to Bevil's settlement in Jasper County, Texas and received a Mexican land grant. In November 1835 as the Siege of Bexar began, the 75-year-old veteran went armed with his rifle to participate. He served with four grandsons and one son-in-law in Captain Cheshire's Company and became first sergeant, ultimately receiving a Republic of Texas land grant for his service. Williams returned to Bevil's settlement, where he died about 1839. He was buried on his homesite, and his grave was marked with a Texas Centennial Marker in 1936. Williams' body was later reburied in the State Cemetery in Austin, and the Centennial marker was relocated to this site.