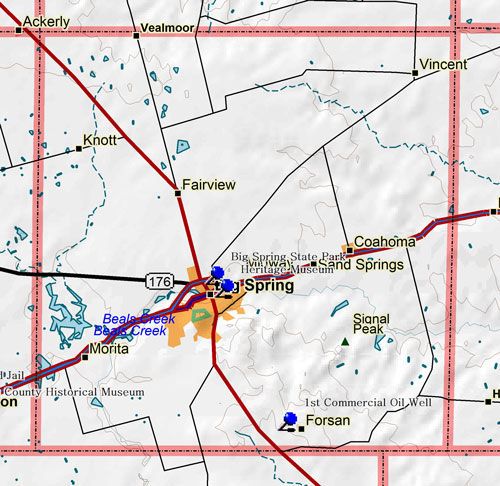 Marker Title: Big Spring State Park on Route of Old Comanche War Trail
Address: Big Spring State Park
City: Big Spring
County: Howard
Year Marker Erected: 1966
Marker Location: Park Road 8 must inside the entrance to the Big Spring State Park
Marker Text: For Comanche war parties, about 1750 to 1875, the Big Spring was an oasis. Here paths from northeast, north and northwest twined into the War Trail that led to San Antonio and other Texas points, and down into Mexico. At the Big Spring, parties from far away as the Arkansas Valley could rest their horses. At this point on return trips northward, their weary captives might find water, rest, and possibly food. The Comanches harrassed settlements, robbing and burning stores, mills, farms, ranches; killing men and capturing women and children to be held for ransom, slavery, or adoption into the tribe. The War Trail was well marked, for warriors took on their long expeditions numerous pack and riding horses, hordes of dogs, and their women and children to wait upon the men and assist in the looting. Indians in the Civil War years, 1861-1865, had much freedom to invade Texas. By 1866 they were selling to New Mexico traders thousands of cattle stolen from Texas ranchmen. Most of the Comanches were put on reservations in 1875. Afterward their old trails were used by white settlers and by hunting parties on special leave. In 1881 a hunting party attacked builders on the T.&P. Railroad working near here. Incise on base: Early travel, communication and transportation series Erected by Moody Foundation