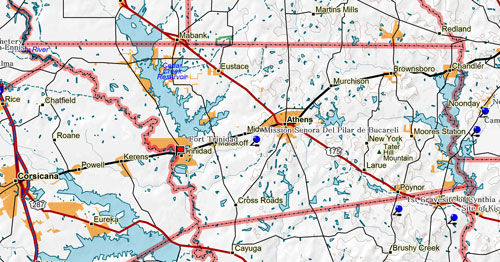 Cherokee War and Battle of the Neches

Marker Title: Cherokee Exodus from Texas
Address: 811 E. Hwy. 31
City: Chandler
County: Henderson
Year Marker Erected: 1969
Marker Location: in front of Chandler City Hall
Marker Text: Driven from eastern states by white settlers, Cherokee Indians migrated to the East Texas area, becoming established by 1820. In 1822, they unsuccessfully sought title to their land from Mexico. The years following were ones of an increasingly uneasy truce for both Texans and Cherokees. In 1839, Mirabeau B. Lamar, Republic of Texas president, sent orders for the tribe to leave Texas. In July 15-16 battle northwest of here two Texans and eighteen Indians, including Chief Bowles (aged 81), were killed. The remaining Indians retreated into what is now Oklahoma.

Marker Title: Henderson County Pottery Industry
City: Athens
County: Henderson
Year Marker Erected: 1973
Marker Location: SH 19 (S. Palestine Rd.) at Bryson Rd.
Marker Text: Prehistoric Caddoan Indians utilized the abundant deposits of rich clays in this region to make their fine pottery vessels. The modern pottery industry in Henderson County began in 1857, when Levi S. Cogburn (1812-1866), one of a family of potters from Georgia, started making cups, saucers, and plates in Athens. Cogburn's plant operated until shortly after his death in 1866. Industry was reactivated in 1885 by M.K. Miller, who with his sons, started the Athens Pottery Company, first of many tile, brick, and pottery plants in the area.

Marker Title: The Trinity River
City: Trinidad
County: Henderson
Year Marker Erected: 1977
Marker Location: SH 21 (south side of road) just west of SH 274 intersection.
Marker Text: Three main tributaries-- the West, Elm, and East forks-- feed the Trinity from headwaters in North Texas. Discovery of prehistoric Malakoff Man carved stone heads near this site in the 20th century revealed that humans inhabited the Trinity valley thousands of years ago. Indian villages dotted the river banks when European exploration began. French explorer robert Cavelier Sieur de La Salle called this waterway the River of Canoes in 1687. Spaniard Alonso de Leon is credited with first using the name "Trinity" in 1690. The fertile Trinity floodplain drew Anglo-American settlers to this area during the Republic of Texas. Buffalo, first Henderson County Seat, was founded a few miles upstream at a ferry crossing. Navigation of the Trinity has been proposed in a number of ambitious plans since the 1850s. Steamboats plied the river carrying cotton, cattle, and lumber to Galveston and other Gulf of Mexico ports until the 1870s. Arrival of the railroad ended the era of riverboat trade. Founded in 1881 on the St. Louis Southwestern Railroad, also known as the Cotton Belt, the town of Trinidad had a pump station to draw water for the boilers of steam locomotives. A ferry crossed the Trinity here until a bridge was erected in 1900.