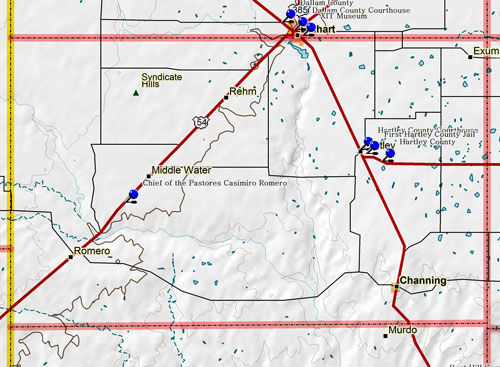 Marker Title: Hartley County Courthouse
City: Channing
County: Hartley
Year Marker Erected: 1987
Marker Location: corner 9th & Railroad, Channing
Marker Text: Hartley County was created in January 1891, and an election held that year designated the town of Hartley as county seat. A frame courthouse was built on the town square. In October 1896, largely due to XIT Ranch interests, a second election was held which resulted in the removal of the county seat to Channing. The frame courthouse was dismantled and moved to the new county seat, where it was reconstructed. In May 1905 the commissioners court approved the construction of a new courthouse. Contracts were awarded to Solan & Wickens, contractors, and O. G. Roquemore, architect. The 2-story, structure was completed in October 1906 at a cost of $10,525. The beaux arts style building features a triumphal arch on the front facade, native sandstone base, and Roman Ionic paired columns. When completed, the top story provided a courtroom and two offices, and there were five offices and a lobby on the first floor. At the time of construction, the building was served by its own water well and lighting system. A vault was added to the county clerk's office in 1927. A second vault and jury dormitories were built in 1935. Recorded Texas Historic Landmark, 1987.

Chief of the Pastores Casimiro Romero

Marker Title: Chief of the Pastores Casimiro Romero
City: Romero
County: Hartley
Year Marker Erected: 1970
Marker Location: from Romero take S.H. 54, 3.5 miles NE
Marker Text: Moved to Texas, 1876, from New Mexico-- wife and two children in a coach, goods in 14 wagons. Owned 6,000 sheep. A Castilian Spaniard by birth, Romero spoke for pastores (sheep herders), who built eleven haciendas and plazas in Canadian River area. Cattle rancher Chas. Goodnight in late 1876 made a pact with Romero to respect right of the pastores to valley of Canadian River. But, railroads and cattle ranches in 1880s cut into sheep lands. Romero returned to New Mexico, selling Texas lands, 1897. He is memorialized in this area by town of Romero (3.5 miles southwest of here). 1970