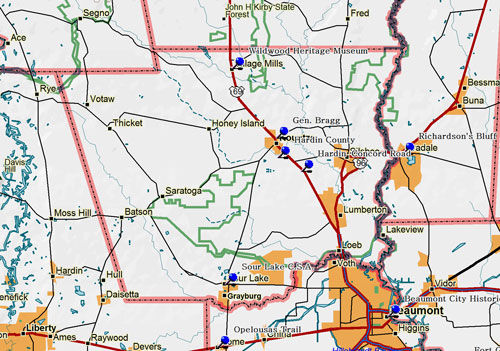 Marker Title: General Braxton Bragg, C.S.A.
City: Kountze
County: Hardin
Year Marker Erected: 1969
Marker Location: SH 326, Hardin County Courthouse
Marker Text: (1817-1876) American military leader honored in this county in name of an early town (12 mi. W). Born in North Carolina, Bragg was in Texas in 1840s with army of General Zachary Taylor, to fight in Mexican War. Made a brigadier general of the Confederacy, 1861, he won renown by capturing many guns and prisoners at Shiloh (1862), and for Southern victory in Battle of Chickamauga (1863). He was respected as a strong disciplinarian, a devoted patriot, and a man with a stern sense of duty. Serving as military advisor (1863-1865) to President Jefferson Davis, he traveled with President Davis after Confederate surrender on a suggested escape route, but was captured by Federals and paroled in Georgia in May 1865. After an 1866-1870 term as Alabama commissioner of public works, he moved to Galveston. There he was chief engineer in charge of construction of Gulf, Colorado & Santa Fe Railway, chartered May 28, 1873. When the G. C. & S. F. built into this area, a junction point on the line was named for General Bragg. The 1901-1934 town of Bragg (now a ghost site) had many facilities serving the Saratoga Oil Field. This was one of many towns (and counties) in Texas named for statesmen, military leaders and soldiers.

Marker Title: Hardin-Concord Road
City: Kountze
County: Hardin
Year Marker Erected: 1971
Marker Location: US 69, 7 mi. south of Kountze
Marker Text: (In use 1859-1900) One of oldest landmarks in area. Formed by wagon and horseback travel from early settlements on Pine Island Bayou (to the SE) to Hardin, first county seat. Much of old road can be traced today. The highway crosses its course here.

Marker Title: Sour Lake C.S.A.
City: Sour Lake
County: Hardin
Year Marker Erected: 1964
Marker Location: 1.5 mi W of Sour Lake on SH 105
Marker Text: Early-day health resort, with baths that attracted such Texans as Gen. Sam Houston. The healing waters had been used for years by the Indians. One spring's water, with high sulphuric acid content, primed telegraph batteries during the Civil War. This was of vital importance, for at best telegraph service was limited. Started in 1854, the 1861-65 system went on from Shreveport to Marshall all the way to Houston, and from Houston to Galveston to Orange. A 20-word telegram sent from Shreveport to Houston in February 1865 cost $36.