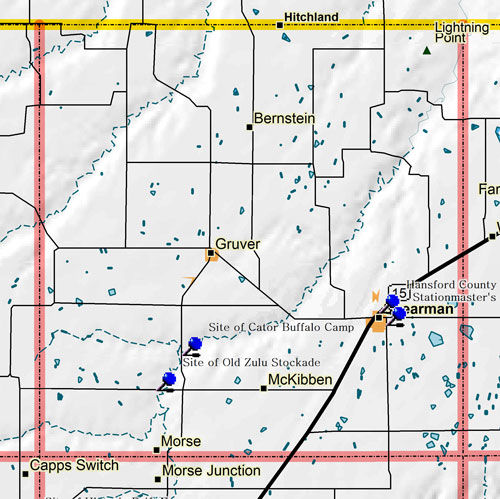 Marker Title: Site of Old Zulu Stockade
City: Morse vicinity
County: Hansford
Year Marker Erected: 1968
Marker Location: 4 mi. N of Morse on SH 136, then 1 mi. W on FM 520
Marker Text: In 1875, a large, two-room pole building furnished with staple groceries and ammunition became the first trading post in Texas above the Canadian River. The stockade, located in Indian-infested country, was fittingly named for the fierce Zulu tribe of Africa. It began as a buffalo camp which crack hunters Jim and Bob Cator (from England) had made the first permanent Panhandle residence at Christmas, 1873. In 1876 Zulu became a major depot on the Ft. Dodge-Ft. Bascom military road, and it eventually received a post office contract. It was finally abandoned, 1912. (1968)