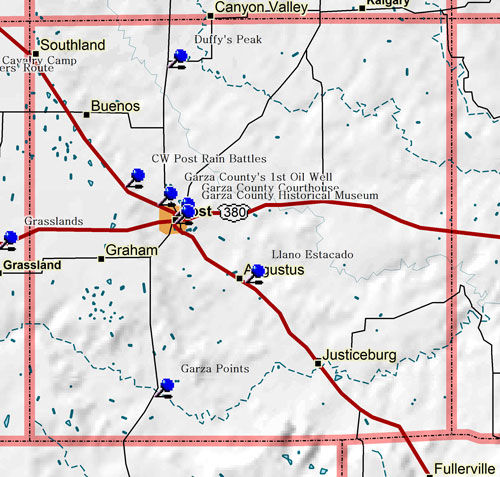 Marker Title: Duffy's Peak
Address: 11 mi. N on SH 207
City: Post
County: Garza
Year Marker Erected: 1969
Marker Location: from Post, take Highway 207 about 11 miles North
Marker Text: Height so prominent it was Garza County's earliest bench mark, designated by peg-legged surveyor Jasper Hays, who in 1877-1878 was marking bounds of Llano Ranch, first property to be occupied by settlers in county. Hays began at a corner established for the Houston and Great Northern Railroad Company near the White River in Crosby County, and shot west toward this peak. Tradition has it that a member of Hays' crew died and was buried near this peak, which was afterward named for him. Local heights named for natural wonders include "The Ice Cream Cones," "Cow Head Mesa," "Indian Head Point," and "The Chimneys," Other interesting uplands are "Two Bush Hill," "The Devil's Breakfast Table," "Needlepoint Peak," and "Buffalo Point." Two balanced rocks known to early settlers have now disappeared because of wind and weather erosion. Duffy's Peak, like most of the scenic formations, is sandstone, clay and sand. It still figures in local land transactions, as Hays' original notes (unearthed from Mason jars he buried on the peak) formed basis for later surveys-- including those of A.L. Marhoff in 1906, establishing boundaries for the farm colony of "Cereal King" C.W. Post. 1969

Marker Title: Garza County Courthouse
Address: 300 W. Main St.
City: Post
County: Garza
Year Marker Erected: 2000
Marker Text: After Garza County's creation in 1876, it was not until 1907, at the initiative of cereal producer C.W. Post, that the county was formally organized. In 1922, when the population had grown to about 4500 and the cotton industry had spurred economic growth, citizens approved the sale of bonds to finance a new courthouse. The commissioners court selected prominent regional architect Guy Carlander of Amarillo to design the courthouse, and awarded the construction bid to the Fred T. Bone Company, also of Amarillo. Built in 1923 of reinforced concrete with brick exterior and cast stone details, the Garza County courthouse is a late, but fine, example of Prairie School architecture. Recorded Texas Historic Landmark - 2000

Marker Title: Garza County's First Oil Well
Address: US 84, 450 ft. NW of Post Office
City: Justiceburg
County: Garza
Year Marker Erected: 1967
Marker Location: US 84, 450 ft. NW of Post Office
Marker Text: (3 1/2 miles east) After several unsuccessful ventures from 1911 to 1919, the first oil producer in the county was completed on J.M. Boren property at Justiceburg in 1926. The well was begun in 1924 by Phelps, Caldwell and Blackwell Oil Company. It produced a total of 1, 641 barrels before it was abandoned in 1932. In 1932 four producing wells were completed south of Post; a refinery was built near city. Garza County has a number of fields, and its 1,500 wells have produced more than 85,000,000 barrels of oil.

Marker Title: Llano Estacado
Address: 8 mi. S on US 84 to rest area
City: Post
County: Garza
Year Marker Erected: 1963
Marker Location: from Post, take US 84 about 8 miles south to rest area.
Marker Text: Stretching across the horizon as a range of flat topped mountains is the Cap Rock Escarpment, eastern boundary of the vast Llano Estacado or "Staked Plains." The Llano, one of the world's most perfect plains regions, is an elongated oval extending from north to south. Some three quarters of it, 20 million acres, are in Texas. The remainder is in eastern New Mexico. Its naturally treeless surface, unbroken except for several canyons, slopes gradually from an altitude of 2,700 feet at its eastern edge to more than 4,000 feet along the New Mexico border. The Cap Rock Escarpment is the result of surface erosion that began in the early pleistocene period some 750,000 years ago. Composed of tough caliche, the Cap Rock has protected the softer materials underlying it, thus resisting the erosive factors with varying success. The escarpment begins in Borden County 25 miles south of this point and extends northward in a sweeping arc 170 miles into the Texas Panhandle. It rises from 300 feet to 1,000 feet above the lower plains at its base, giving the impression of having been thrust upward out of the surrounding land. First white man to visit the Great Plains was the Spanish Conquistador Francisco de Coronado who crossed them in 1541 on his search for the fabled Seven Cities of Cibola. He was especially impressed by the sea of grass which covered the soil so completely that the tracks of his expedition left no permanent mark. The Spaniards, it is said, staked their route so they would be guided on the return-trip-- hence the term "staked" plains.

Marker Title: C.W. Post Rain Battles
Address: 3 mi. NW on US 84
City: Post
County: Garza
Year Marker Erected: 1967
Marker Location: From Post, take US 84 Northwest about 3 miles
Marker Text: Site of 1911-1914 dynamiting to produce rain, carried on by C.W. Post, Texas farm colonizer and cereal foods millionaire. After reading that rain often accompanies cannonading in war, Post planned "battles" to relieve droughts. He thought vertical air currents would condense vapor in atmosphere and cause rain. He first used dynamite airborne by kites, but soon replaced this dangerous method by setting off explosions on edge of Caprock. Post's experiments were said to have been 40% effective, and cost $50,000. He battled drought on farms until his death, 1914. 1967