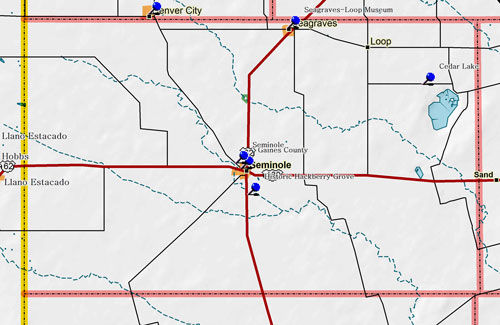 Marker Title: Gaines County
City: Seminole
County: Gaines
Year Marker Erected: 1989
Marker Location: Intersection of US 180 and SH 214, Seminole
Marker Text: Named for James L. Gaines, a signer of the Texas Declaration of Independence, this county was formed out of Bexar County in 1876. Anglo settlement of the area began about 1895, and the county was formally organized in 1905. Seminole was established as the county seat that year, and a courthouse was built in 1906. Ranching and farming were the most prominent and profitable occupations until the mid-1930s, when they were eclipsed by oil production. Gaines County encompasses 1,479 square miles, and Seminole and Seagraves are its two largest cities. 1989

Marker Title: Historic Hackberry Grove
Address: 2 mi S of Seminole on Highway 385
City: Seminole
County: Gaines
Year Marker Erected: 1968
Marker Location: 2 mi S of Seminole on Highway 385
Marker Text: Earliest known human habitation in Gaines county. This small, unique grove of Hackberry trees has survived in this arid land because of sub-irrigation provided by a very shallow draw. First officially reported by Col. W.R. ("Pecos Bill") Shafter, 24th Infantry, during his scouting of the north and western plains area in 1875. In this draw, Col. Shafter and his men found some 50 wells, 4 to 15 feet deep. Surrounding one well in the grove were evidences of use by roving bands of Indians as a seasonal campsite. a Fourth of July gathering settlers in this grove in 1905 planned local organizations of Gaines County, which had been created in 1876. In election of October 24, 1905, the first officers were selected and Seminole was named the county seat. Hackberry Grove and the shallow water well which is located here served Gaines contains as an area for recreation and outdoor meetings until the early 1940's, when the discovery of oil and installation of a pump station caused the grove to be closed to the public.

Marker Title: Seminole
City: Seminole
County: Gaines
Year Marker Erected: 1970
Marker Location: Intersection of US 180 and SH 214, Seminole
Marker Text: Founded and designated county seat in 1905, same year county was organized. Took name from Seminole wells, Indian watering places to south and west. First store and post office were established in 1905 by W.B. Austin of nearby Caput. The courthouse was built in 1906. Seminole grew slowly, being chiefly important as a trading center. Arrival of the Midland and Northwestern Railroad (1918) and development of highways and oil resources all helped seed the town's later expansion. Today it is a business center for farming and petroleum industry. 1970