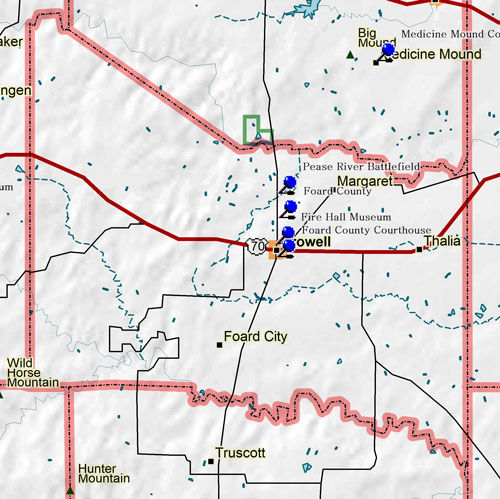 Marker Title: Foard County Courthouse
Address: 100 Main at Commerce St. (SH 6 at US 70)
City: Crowell
County: Foard
Year Marker Erected: 2001
Marker Location: 100 Main at Commerce St. (SH 6 at US 70)
Marker Text: Foard County Courthouse. This is the second courthouse to serve Foard County since its creation in 1891. By 1909, the first courthouse proved too small for the needs of the county, and voters passed a bond election for the purpose of building a new one. The Commissioners Court selected Elmer G. Withers as architect, R.H. Stuckey as superintendent, and G.W. Brillhart of Abilene as contractor. Completed in 1910, the Classical Revival courthouse featured a statue of Lady Justice atop a domed cupola and prominent porticoes with paired Corinthian columns on each side. Tornado damage in 1942 resulted in the loss of these features, but the courthouse was repaired and still retains the basic configuration of its original design. Recorded Texas Historic Landmark - 2001

Marker Title: Pease River Battlefield
City: Crowell
County: Foard
Year Marker Erected: 1968
Marker Location: In city park, Highway 6-Crowell (site located 8 miles northeast)
Marker Text: In 1860, at the Battle of Pease River, Indian captive Cynthia Ann Parker and her daughter, Prairie Flower, were rescued by Texas Rangers under Captain L.S. Ross (later Governor of Texas). Cynthia Ann, most celebrated of all Comanche captives, had been taken at age 9 in a raid on Fort Parker, May 19, 1836. Traders who saw her later said she had taken the name "Naduah" and wished to remain among her adopted people. She married Chief Peta Nocona, by whom she had 2 sons, Pecos and Quanah Parker. Although she was returned to her uncle's family, she was never completely happy and tried to escape several times. She died 1864. (1968)