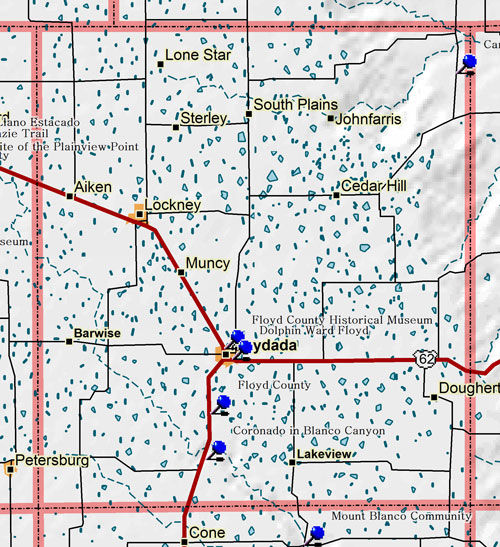 Marker Title: Camp Resolution of the Texan Santa Fe Expedition
Address: 25 mi. E on FM 97; 5 mi. N on FM 1065
City: Lockney
County: Floyd
Year Marker Erected: 1986
Marker Location: from Lockney, take FM 97 East about 25 miles, then take FM 1065 north about 5 miles.
Marker Text: In an effort to establish a western trade route and expand Texas jurisdiction, Republic of Texas President Mirabeau B. Lamar sent an expedition of merchants, along with a military escort, to Santa Fe in 1841. The group left Brushy Creek north of Austin in June and in August arrived in this vicinity, where they established campsites at the confluence of the Los Lingos and Quitaque Creeks (1 mi. E). Traveling across unfamiliar territory, the expedition encountered numerous hardships. Provisions, food, and water were reduced to dangerously low levels, and bands of Kiowa Indians continually harrassed the group, killing some. Facing the impassable ravines of the Caprock, the military commanders decided to divide the group. One party was sent to find New Mexican settlements and seek help, while the second remained. 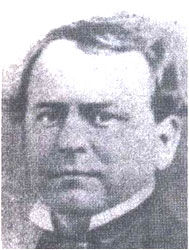 Commander Hugh McLeod drew up a resolution detailing the decision to split the command, and the site became known as Camp Resolution. Finally reaching New Mexico in September, the men were met by Mexican soldiers and were forced to march to Mexico City, where they were imprisoned. Resulting in a U.S.-Mexico diplomatic controversy, the expedition also aided Texas' western land claims. Texas Sesquicentennial -1836-1986

Marker Title: Coronado in Blanco Canyon
City: Floydada vicinity
County: Floyd
Year Marker Erected: 2000
Marker Location: 8 miles south of Floydada on US 62 in roadside park.
Marker Text: From 1540 to 1542, Francisco Vazquez de Coronado led the first organized European exploration of the southwest in search of the fabled "cities of gold." With a company of more than a thousand men and women and thousands of horses and mules, cattle and sheep, Coronado trekked north from Culiacan, Mexico, through land that became Arizona, New Mexico, Texas, Oklahoma and Kansas. The exact route along which their Indian guides led the Spaniards between Pecos Pueblo in New Mexico and the Arkansas River in Kansas has long been a subject of debate among historians. Surviving documents are brief, vague and occasionally contradictory. Twice in the spring of 1541, the company camped long enough to have created detectable archeological evidence; the first time, they chose the site of a Teya Indian camp. A hailstorm struck, destroying most, if not all, of their pottery. They occupied a second camp for two weeks in a canyon that was described as being "a league wide." In the 1950s and 1960s, two pieces of chain mail were discovered by local ranchers in and near Blanco Canyon. Since 1993, a series of other objects, both European and from other parts of the southwest, have been found in the same area. They include projectile points similar to those used on crossbow arrows. Crossbows were obsolete after this expedition and are unlikely to have been used by any other group of significant size. In the late 1990s, archeologists began the task of confirming this area as the location of one of Coronado's camps. Evidence and artifacts recovered supported the theory that Coronado passed through Blanco Canyon. (2000)

Marker Title: Dolphin Ward Floyd
Address: FM 784, at courthouse
City: Floydada
County: Floyd
Year Marker Erected: 1986
Marker Location: Courthouse Lawn, FM 784, Floydada.
Marker Text: When this county was created in 1876, it was named in honor of Dolphin Ward Floyd (1804-1836). A native of North Carolina, Floyd left his home in 1825 and arrived in Gonzales, Texas, about 1832. He married Esther Berry House and they had two children. In February 1836, Floyd, along with 31 other Gonzales residents, answered Lt. Col. William B. Travis' call for help at the Alamo in San Antonio. During the battle that ensued, Floyd and his comrades were killed fighting for Texas' independence from Mexico. Texas Sesquicentennial 1836-1986