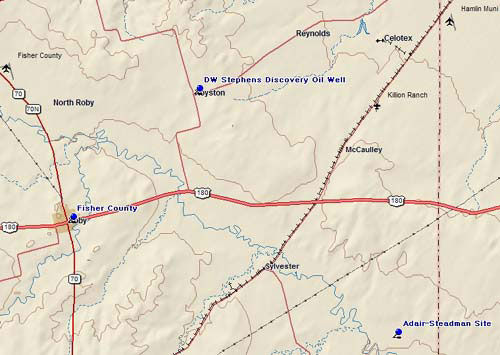 Marker Title: Adair-Steadman Site
City: Roby vicinity
County: Fisher
Year Marker Erected: 1984
Marker Location: 10.4 miles east of Roby on US 180, then 6 miles south on FM 1812
Marker Text: In this vicinity is a prehistoric archeological site discovered in 1969 near the Clear Fork of the Brazos River. Archeologists have conducted extensive scientific excavations and attribute most of the cultural materials to the Paleo-Indian Period. The Adair-Steadman Site was a large base campsite for makers of fluted points, who were part of the distinctive Folsom culture between nine and eleven thousand years ago. Prehistoric peoples chose to live here because of the availability of water at the time of occupation and the presence of a large stone resource area nearby. Stone tools and other material recovered include fluted point fragments, point preforms, channel flakes, scrapers, gravers, and large bifaces. Future archeological, geological, and paleontological studies of the site may yield sufficient data to reconstruct the physical appearance of the site during its period of occupation. One of the most significant locations of Folsom artifacts in North America, the Adair-Steadman Site is important as a valuable source of information on the prehistory of the state, the nation, and the entire continent. It is protected from disturbance by federal and state antiquities laws. (1984)

Marker Title: D.W. Stephens No. 1 Discovery Oil Well
City: Roby vicinity
County: Fisher
Year Marker Erected: 1998
Marker Location: 3.9 mi. east of Roby on US 180; 4.2 mi. N on FM 1224 to its intersection with FM 2142
Marker Text: (The Texas Company [Texaco]) The search for oil in Fisher County began in 1918. Though four wells were drilled in the southwestern part of the county in 1919, all four were dry, and more wells were drilled in the Rotan area. None of these yielded oil. Dan W. Stephens (1860-1946) and his wife Laura Bell Johnson owned 3,100 acres of land near the railroad town of Royston. The Stephens property was selected for a well in 1927. On May 21, 1927, the Texas Company (later Texaco) began drilling approximately four miles north of this site. The well was drilled to 2,302 feet. It encountered a casing problem and was plugged and abandoned. On October 24, 1927, another hole was begun fifty feet to the east. By January 19, 1928, it had become the first producing oil well in the county, reaching 3,275 feet into the earth. Eventually, seven wells were located on the Stephens land, and more wells dotted the landscape of Fisher County. Revenues from the petroleum business helped landowners through the Depression era, brought sorely needed employment, and helped to build and maintain schools, roads, buildings, and hospitals. The Stephens No. 1 produced 481,447 barrels of oil in 66 years. Plugged and abandoned in November 1994, its service to Royston and Fisher County is remembered. (1998)