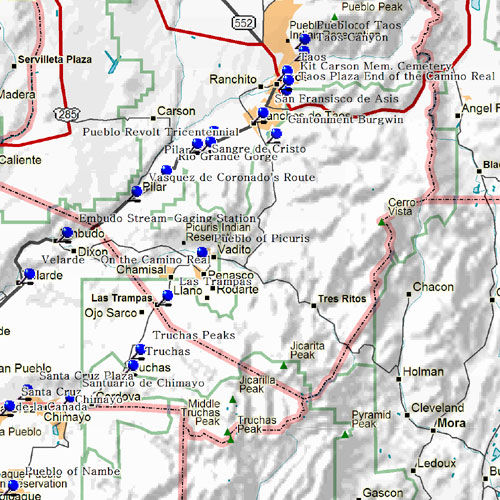 Never officially designated a fort, this post was built to protect the Taos Valley from Utes and Jicarilla Apaches. It is named for Capt. John H.K. Burgwin, who was killed in the Taos uprising of 1847. It was abandoned in 1860 and is now the site of the Fort Burgwin Research Center.

Indians occupied the Chimayo valley centuries before the arrival of the Spaniards. The village of Chimayo, founded in the early 18th century, shortly after the reconquest of New Mexico, has been a center of the Spanish weaving tradition for over 250 years. The village retains the historical pattern of settlement around a defensible plaza.

Site of the first United States Geological Survey training center for hydrographers. Those trained here made some of the earliest hydrological studies in the nation, leading to stream-gaging of many steams throughout the country, and thus providing important evaluations of the nation's surface water resources.

In 1868, Christopher "Kit" Carson, the legendary guide, scout, soldier, and trapper, died in Fort Lyons, Colorado. The next year, his body and that of his wife Josefa were brought home to Taos. Others buried here include soldiers killed in the 1847 rebellion protesting the U.S. annexation of New Mexico.

The village of Las Trampas was established in 1751 by 12 families from Santa Fe, led by Juan de Arguello, who received a land grant from Governor Tomas Velez Cachupin. The Church of San Jose de Garcia is one of the finest surviving 18th-century churches in New Mexico.

In 1795, twenty-five families were granted land along the Rio Grande at Pilar, then known as Cieneguilla. The Battle of Cieneguilla was fought at Embudo Mountain near here in March 1854. A large force of Utes and Jicarilla Apaches inflicted heavy losses on sixty dragoons from Cantonment Burgwin near Taos.

Occupied since about 1300, this Tewa pueblo was first described by Castano de Sosa in 1591 as a square structure, two stories high with a central plaza whose people irrigated their crops. By the 18th century its population had dropped to 6 to 7 families. The present church of San Francisco de Nambe was built in 1974.

The pueblo of Picuris, first visited by Spaniards in 1591, was described as being 7 to 8 stories high. In the 18 th century Picuris cooperated with the Spaniards against the raids of the Plains Indians. The church, the third at this pueblo, dates from the 1770s.

In 1680 Pueblo Revolt began at the Pueblo of Taos when Pope, a religious leader driven from San Juan by Spanish authorities, sent runners carrying a knotted cord to other pueblos designating the number of days until the uprising. Tiwa warriors from Taos and Picuris moved south on August 10 to besiege Santa Fe.

Parts of Taos were occupied when Hernando de Alvarado visited here in 1540. Taos served as the headquarters from which Pope, of San Juan Pueblo, organized the Pueblo Revolt in 1680. In 1846, the pueblo was a refuge for Hispanics and Indians resisting the annexation of New Mexico by the United States.

The Rio Grande cut this spectacular gorge through layers of basalt, a volcanic rock that erupted between 2 and 5 million years ago. This basalt was highly fluid and flowed many miles. The enormous landslide blocks downstream were caused by undercutting when the river was much larger during the Pleistocene glacial age.

This Mission Church is one of the oldest churches in America dedicated to San Francisco de Asis. It was constructed between 1813 and 1815 under the direction of the Franciscan Fray Jose Benito Pereyro. It is an outstanding example of adobe mission architecture. This Church continues to this day to be a place of worship and an integral part of the community.

From left to right along the eastern horizon, two of New Mexico's highest mountain ranges are visible, the Truchas Range and The Santa Fe Range. Both are part of the Sangre de Cristo Mountains of the Southern Rockies where glacier carved alpine peaks rise to elevations exceeding 13,000 feet.

In 1695, Governor Diego de Vargas founded his first town, Santa Cruz de la Canada, designed to protect the Spanish frontier north of Santa Fe.   The church which still stands, was constructed in the 1730s. In 1837, residents revolted against Mexican authorities, resulting in the death of Governor Albino Perez.

In 1695 Governor Diego de Vargas founded Santa Cruz de la Canada south of the Santa Cruz river. The town was later moved to this site north of the river. The church facing the plaza dates from the 1730s. Santa Cruz was an important stop on the Camino Real between Santa Fe and Taos.

In 1816, Bernardo Abeyta and the other residents of El Potrero, then a separate community, finished this massive adobe chapel honoring Nuestro Senor de Esquipulas. It is noted for its 6-foot crucifix and its tradition of healing the sick. The Santuario remained in the Abeyta family until the 1920s.

The Spanish community of Taos developed two miles southwest of Taos Pueblo. It later served as a supply base for the "Mountain Men," and was the home of Kit Carson, who is buried here. Governor Charles Bent was killed here in the anti-U.S. insurrection of 1847. In the early 1900s, Taos developed as a colony for artists and writers.

In 1692, after having been driven from New Mexico by the Pueblo Revolt of 1680, the Spanish began to re-establish their rule. In one of the last battles of the reconquest, in September 1696, Governor Diego de Vargas defeated the Indians of Taos Pueblo at nearby Taos Canyon.

Taos Plaza-End of the Camino Real

Spanish settlers lived in the Taos Valley before the Pueblo Revolt of 1680, but the town of Fernandez de Taos was not founded until the 1790s. The Camino Real, or King's Highway, from Mexico City reached its end in this plaza and in nearby Taos Pueblo.

In 1754, Governor Tomas Velez Cachupin granted land on the Rio Truchas to families from Santa Cruz and Chimayo. Because Nuestra Senora del Rosario de Truchas was on the northern frontier, and subject to attack by Plains Indians, the governor stipulated that the houses should form a square with only one entrance.

Ice age glaciers carved these beautiful alpine peaks, among the highest in the New Mexico Rockies, rising to 13,101 feet. Precambrian quartzite, some of the oldest rock in New Mexico, forms the core of the Truchas ("trout") Peaks, part of the Pecos Wilderness which encompasses some of the most pristine mountain terrain in the state.

Under orders from Francisco Vasquez de Coronado in 1540, Captain Hernando de Alvardo explored among the pueblos and followed this route from Espanola to the Pueblo of Taos. Captain Francisco de Barrionuevo also passed this way the following year on his way to the same pueblo.

Founded in 1875, this small farming community was first named La Jolla. It was once famous for finely woven blankets. Here the Camino Real left the Rio Grande and followed a canyon northeast to Embudo Creek where it began a climb over the mountains to Taos.