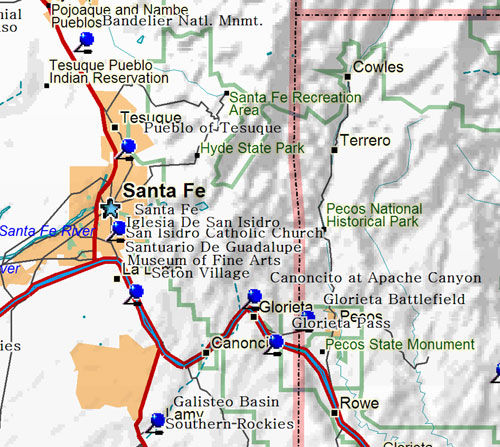 Thought to be an early home of the Indians from Cochiti and other Keres-speaking pueblos, the villages and cliff houses of Frijoles Canyon were occupied from the 1200s to before the arrival of the Spaniards in 1540. The monument is named for Adolph F. Bandelier, explorer and pioneer anthropologist of the Pajarito Plateau.

Strategically located where the Santa Fe Trail emerges from Glorieta Pass, this is where Mexican Governor Manuel Armijo prepared to defend New Mexico against the American Army in 1846. Here too, Union forces destroyed a Confederate supply train on March 28, 1862 while the Battle of Glorieta was in progress six miles to the east.

The extensive lowland south of here is called the Galisteo basin, a sag in the earth's crust where rock layers are depressed and thickened. It is one of the northernmost basins of the Basin and Range province in New Mexico and is bordered by the Rocky Mountains immediately to the north.

The decisive battle of the Civil War in New Mexico was fought at the summit of Glorieta Pass on March 28, 1862. Union troops won the battle when a party of Colorado volunteers burned the Confederate supply wagons, thus destroying Southern hopes for taking over New Mexico. More 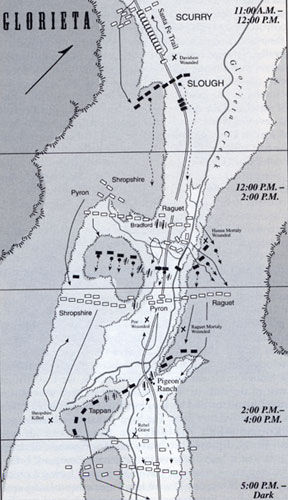 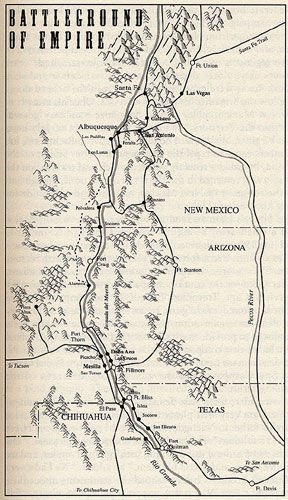 Maps of Battle of Glorieta and Battleground of Empire are from the book, Blood & Treasure, by Donald S. Frazier

This pass served as a gateway through the mountains for Francisco Vasquez de Coronado in 1541 enroute to explore the plains, for Spanish friars attempting to convert Plains Indian tribes in the 1600s, for Apaches and Comanches entering the Pueblo area from the east, and for the Santa Fe Trail from the 1820s to 1880s.

The Museum of Fine Arts opened in 1917. It was patterned after several early Franciscan missions in New Mexico. The Museum displays exhibits and serves as a center for performing arts events. The Museum of International Folk Art, Laboratory of Anthropology and Palace of the Governors are other units of the Museum of New Mexico in Santa Fe.

The small Tewa-speaking pueblo of Tesuque was established around 1300, and was first visited by Europeans in 1591. The Pueblo Revolt, which drove the Spanish from New Mexico for thirteen years, broke out here in 1680. Its present church was built in the 1880s, on the foundations of the earlier structure.

This 19th century adobe church is dedicated to San Isidro the ploughman, patron saint of farmers and protector of crops. Christian tradition maintains that in order to allow San Isidro time for his daily prayers, an angel plowed his fields. Agua Fria observes the fifteenth of May as "His Day of Goodwill" to honor his rose in this agricultural community along El Camino Real.

Santa Fe, the oldest capital city in the United States, was established in 1610 as the seat of Spanish colonial government for the Province of New Mexico. The Palace of the Governors, used by Spanish, Mexican, and Territorial governors, has flanked the historic plaza since its construction in 1610, and now comprises part of the Museum of New Mexico.

This adobe church, built sometime between 1776 and 1795, is the oldest shrine to Our Lady of Guadalupe in the United States. Its canvas painting of Our Lady is an outstanding example of Spanish ecclesiastical art. No longer an active church, the building is now a unique museum depicting New Mexico's religious history and is used for concerts and other community activities.

Ernest Thompson Seton (1860-1946) naturalist, artist, writer, authority on Indian lore, and first Chief Scout of the Boy Scouts of America, lived here during the last part of his life. The village includes his home, art collection, library, and Indian museum.

These foothills and the higher glaciated peaks to the north are the southern tip of Rocky Mountains. This particular segment is known as the Sangre de Cristo ("blood of Christ"), a formidable barrier that rises above 13,000 feet in a chain of peaks that trend from Santa Fe on the south to Salida, Colorado on the north.