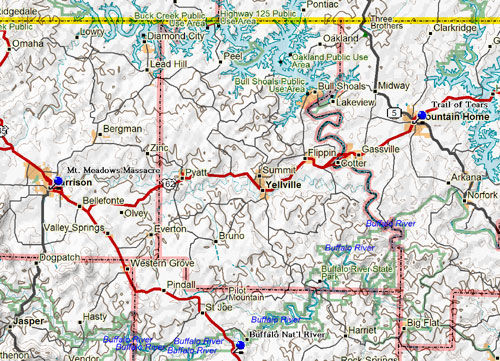 Buffalo National River is a 95,000-acre National Park unit that preserves unique natural and cultural features of the Arkansas Ozarks. During the Civil War, the rugged terrain became a battleground between aggressive independent Confederate units and the Union forces holding northwest Arkansas. The residents caught in the middle of the constant skirmishing lost farms, possessions, and lives. Skirmish sites, saltpeter caves, and Civil War-era farms are interpreted. For Civil War orientation, the Park staff recommends visiting the Tyler Bend Visitor Center, near Marshall

In memory of 140 men, women and children. Arkansas emigrants to California in 1857 under leadership of Alexander Fancher (Piney Alex) left from Caravan Spring 4 miles south of here around May 1, camped at Mountain Meadows, Utah in early September. Attacked by Indians directed by Mormons. Formed a corral with wagons. Fought several days till ammunition exhausted. Approached by Mormons under flag of truce. Promised protection. Surrendered. All were killed except for 17 small children. Found later in Mormon homes. Rescued by Army in 1859. Taken to Arkansas. Cared for by relatives John D. Lee. Mormon Bishop tried, found guilty, executed in 1877. Confessed guilt and Mormon complicity.

During the 1830s the Cherokee Indians were moved by the government from their homes in Tennessee and Arkansas into Oklahoma. They traveled over trails, later called military roads, built just ahead of them by the soldiers. One road, known at the Trail of Tears because of the Indians' sorrow over leaving their homes, crossed Northfork River near the present dam. The trail then crosses Hwy 3 about 5 miles SE of Mountain Home, and followed the old military road then turned NW crossing Hwy 62 S southwest of town. It crossed White River at Mooney's Ferry on thru Summit and Oklahoma.