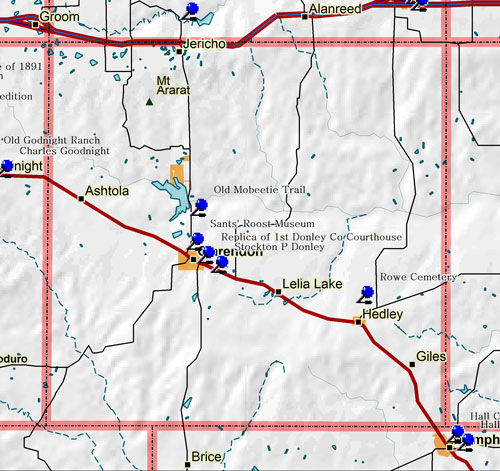 Marker Title: Replica of First Donley County Courthouse
County: Donley
Marker Location: Marker is missing.
Marker Text: Soon after founding in 1878 of Clarendon Colony by the Rev. Lewis H. Carhart, workers were brought from Vermont to quarry local stone and erect 2-story structure for hotel, stagecoach stand, and public meeting hall. With organization of Donley County, April 11, 1882, Clarendon was named county seat. The hotel became (and remained for years) the first courthouse-- and third courthouse in entire Panhandle of Texas. It served settlers in an 8,000 square mile area, since eight unorganized counties were for years attached for judicial purposes to Donley County. (1967)

Marker Title: Old Mobeetie Trail
City: Clarendon
County: Donley
Marker Location: Not located- S.H. 70, north of Clarendon
Marker Text: (to early town, about 40 mi. NE) A road older than recorded history; carved out in centuries of wintertime travel to the south, spring migration to the north, by millions of bison and by Indians who lived by hunting these large animals. Important in era of Texas Panhandle settlement. Used in 1873-1874, when first lifelong residents put dugout dwellings in the Panhandle and began to hunt buffalo to fill demand for hides and meat. Fort Elliott, established 1875 to regulate Indians resisting white settlement, soon had as a neighbor the town of Mobeetie, which for some years was the county seat for 28 counties and a place to go for medical aid, supplies, and access to stage travel. In 1876 Kansans came this way south for better hunting, calling this "Rath Trail," for their leader. Also, in 1876 cattlemen began to bring herds here. By 1880 this ancient path was a southern arm of Jones and Plummer Trail, over which cowboys moved longhorns to railroads and northern cattle markets. Beginning about 1887 the Mobeetie Trail was used by "nesters" taking up farm lands alongside the old great ranches. Those it served founded and expanded agricultural-commercial economy of the Panhandle.

Marker Title: Rowe Cemetery
City: Hedley vicinity
County: Donley
Year Marker Erected: 2001
Marker Location: 1.3 miles northwest of Hedley on FM 1932
Marker Text: Historically significant for its associations with rancher Alfred Rowe and the now-extinct community of Rowe, this burial ground is a reflection of early area farming and ranching efforts and the harshness of pioneer life as permanent settlement came to the Panhandle. With help from cattleman Charles Goodnight, Englishman Alfred Rowe (1853-1912) established the RO ranch on Skillet Creek in 1880, and within ten years had amassed 100,000 acres of land and more than 10,000 head of cattle. His encouragement and support aided the development of Rowe, named in his honor, as a commercial center on the Fort Worth and Denver City Railway line. Kentucky native Isaac Smith, in whose home the Rowe post office was established in 1892, set aside part of his land for use as a community cemetery in 1898, after the death of four children in the Beedy family. Originally located in the family garden, the children's graves were moved to the Rowe cemetery upon its establishment. Even after the community of Rowe moved one mile southeast in 1907, to become the town of Hedley, this cemetery continued to serve as the primary burial ground for area residents. Isaac Smith's grandson, W.I. Rains, provided additional acreage for the Rowe cemetery during the 20th century, and by 1999 there were more than 1,500 marked graves here. A veterans memorial placed in 1990 and the graves of 32 victims of the influenza epidemic of 1918-19 lend additional significance to the Rowe cemetery. (2001)