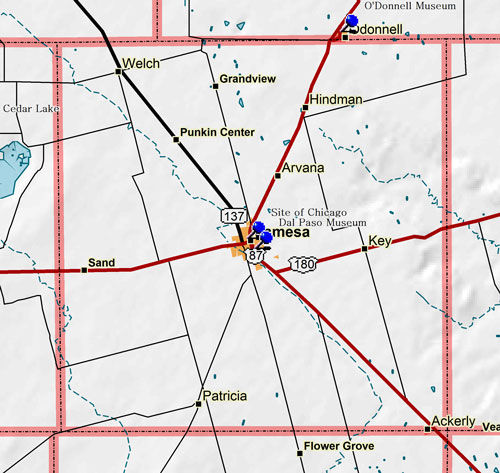 Marker Title: Site of Chicago
Address: FM 2592
City: Lamesa
County: Dawson
Year Marker Erected: 1977
Marker Location: Northeast corner of FM 2592 and North 22nd Street, Lamesa.
Marker Text: W.C. Bishop of Chicago, Illinois, and wealthy lumberman George N. Fletcher established the Oto (later Bar To) ranch about 1887 on Fletcher's extensive landholdings in Dawson County. A post office was opened at the ranch headquarters on May 15,1889, and named Chicago, both in honor of Bishop's home town and in humorous reference to the sparse population of the area. The postal facility served other large ranches in this vicinity, such as C.C. Slaughter's Long S. In the 1890s, Fletcher left the ranching venture, and A.F. Crowley and W.H. Godair became Bishop's partners. By that time, a village had begun to grow up around the post office. B.A. Oden served as Oto ranch foreman and Postmaster of Chicago from 1894 to 1903. When Walter Stemmons replaced him in both positions in 1904, the settlement was renamed Stemmons. The same year, a post office was established in the new town of Lamesa, two miles south of Chicago. Dawson County was organized in 1905, and both towns entered the contest for county seat. When Lamesa won, residents of Chicago quickly relocated their homes and businesses there. The school and Baptist and Methodist churches also moved to Lamesa, within days, the Community of Chicago has disappeared. 1977