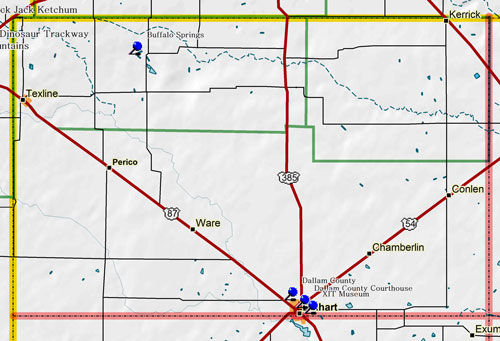 Marker Title: Buffalo Springs
City: Dalhart
County: Dallam
Year Marker Erected: 1936
Marker Location: From Dalhart take U.S 87, 15 miles northwest, turn north onto F.M. 1879 about 12.8 miles, pass F.M. 296 and head west onto private ranch, marker near house and springs.
Marker Text: Its permanent water made it known at opening of 17th century as a great hunting ground alive with buffalo and mustangs. A cow camp before 1878. Since 1882, headquarters of XIT Ranch, once largest fenced ranch in the world consisting of three mullion acres. Exchanged for the construction of the State Capitol. (1936)

Marker Title: Dallam County Courthouse
City: Dalhart
County: Dallam
Year Marker Erected: 1991
Marker Location: 5th & Denver Streets, Dalhart
Marker Text: Created in 1876 and organized in 1891, Dallam County was named for Republic of Texas Attorney James W. Dallam (1818-1847). Texline, located on the line of the Fort Worth and Denver City Railroad and the only town in the county when it was organized, served as first county seat. A courthouse was built in 1891. Ten years later, when the Rock Island Railroad built a line through the county, the new town of Dalhart was established where the Rock Island and Fort Worth and Denver City rail lines crossed. The county commissioners court voted to move the county seat to Dalhart in 1903, and in May that year an election was held to approve bonds for a courthouse. County government soon outgrew the 1903 building, and in 1922 the voters approved more bonds for a new courthouse. Designed by the Amarillo architectural firm of Smith & Townes, this Classical Revival structure was completed in 1923. Built of brick with cast stone detailing, the building rises from a rusticated ground floor to more finely detailed upper stories, and features Ionic columns, curvilinear parapets, and denticulated cornice. A fine example of its style, the courthouse continues to serve the citizens of Dalhart and Dallam County. Recorded Texas Historic Landmark - 1991