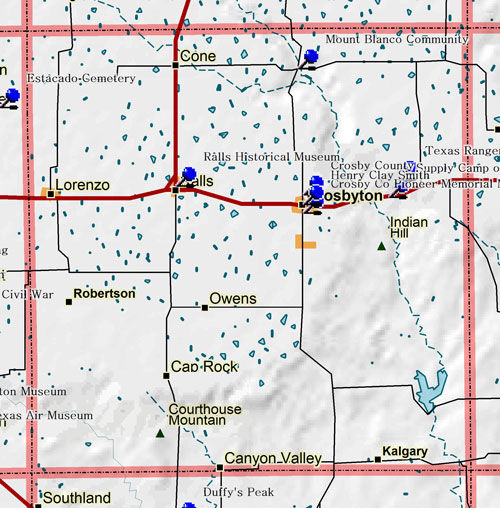 Marker Title: Crosby County Courthouses
City: Crosbyton
County: Crosby
Year Marker Erected: 1966
Marker Location: Courthouse corner of Aspen and Berkshire, Crosbyton.
Marker Text: Crosby County, created in 1876 and organized 1886, had its first county seat at Estacado (founded 1879 by a colony of Quakers). It was on a mail and stage road, in the northeast corner of the county. Freight hauling of materials was slow. County offices were in dugouts, shacks and wagons for two years, until the first courthouse could be completed in 1888. The second county seat was established in 1890 at Emma (named for the fiancee of R.L. Stringfellow, one of the town's promoters), nine miles west of here. The courthouse at Estacado was taken down, moved and rebuilt at cost of $3,000. It served 20 years. When the Crosbyton-South Plains Railroad was built in 1910, Emma was four miles off its route. Crosbyton won an election as the new county seat, and Julian Bassett (one of the founders of Crosbyton) donated a site for the courthouse. The county court met in the schoolhouse until the building of the present courthouse and jail in 1914. County judge at that time was Pink Parrish. Commissioners were John K. Fullingim, W.E. McLaughlin, J.A. Noble and R.M. Wheeler. This commemoration is by the 1965 Commissioners Court. County judge, Cecil Berry; Commissioners: Leilan Caddell, Curt Hendrick, Jack Henry, W.C. Odom. 1966

Marker Title: Main Supply Camp on Historic Mackenzie Trail
Address: 4 mi. E on US 82
City: Crosbyton
County: Crosby
Year Marker Erected: 1967
Marker Location: From Crosbyton, take US 82 about 4 miles East
Marker Text: Trail followed by Gen. Ranald Mackenzie, U.S. 4th Cavalry in 1871 frontier campaign. He camped at Dewey Lake after brush with Indians. In 1872, he was again ordered to ferret out the Comanches. From his main supply camp on Brazos River Freshwater Fork (now White River), he launched a drive against Quanah Parker. Ended with fights in Palo Duro and Tule Canyons, last battles between Indians and Cavalry in this area; opened the Plains to white settlement. 1967

Marker Title: Mount Blanco Community
Address: 12 mi. N on FM 651 to FM 193
City: Crosbyton
County: Crosby
Year Marker Erected: 1975
Marker Location: From Crosbytown, take FM 651 about 12 miles north to intersection with FM 193.
Marker Text: Named for tall white mesa that was a landmark on Mackenzie Trail, surveyed in 1871 by U.S. Cavalry scouting for Indians on the frontier. Near the mesa in 1877, frontiersman Henry Clay Smith (1836-1912) built a two-story stone house for speculators Charles Tasker of Philadelphia and Lord Jamison of Ireland. This was the first permanent homestead in South Plains Region. Smith also brought in cattle for Tasker, and had to accept house as his compensation when Tasker failed in business. In the fall of 1877, Smith moved his family here; nearest neighbor was 50 miles east. The home became a way-station for prospectors, and Smith encouraged many settlers such as Paris Cox, the Quaker founder of Estacado (22 miles West). Mount Blanco Post Office opened in September 1879, with Mrs. Smith (Elizabeth Boyle, 1848-1925) as postmaster. In 1886, Smith led in organizing Crosby County. This area prospered, and by 1890 had a school. Farming largely replaced ranching after 1900. Post office closed in 1916. School consolidated with Crosbyton in 1949. Smith's stone house (1 mile North) burned in 1952. Village of Mount Blanco (4 miles northeast) lost its last store about 1956, its church in 1965. Only a cotton gin and clubhouse now (1975) remain as public buildings in Mount Blanco. 1975

Marker Title: Smith, Henry Clay (1836-1912)
Address: US 82 & FM 651
City: Crosbyton
County: Crosby
Year Marker Erected: 1965
Marker Location: Pioneer Memorial Museum, Intersection of FM 651, and US 82, Crosbyton.
Marker Text: First to set up a post office and to farm in Crosby County; first to break land and drill a water well on High Plains. At start of Civil War, he was miner at Pinos Altos, New Mexico and joined in moves to take gold and silver mines for South. But Indian raids closed mines. When the Confederate Army withdrew from Arizona and Mexico in 1861, Smith along with others joined the South's cause. Served four years in Texas and spent rest of his life here. Replica of old rock house he built near here in 1877 is now shown in museum at Crosbyton. 1965